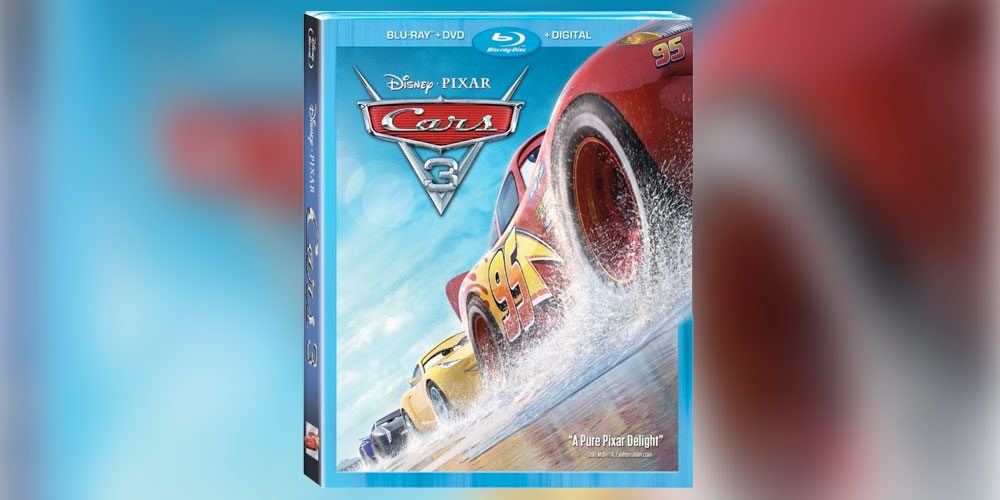 Even though my sons are now teenagers, I had no problem offering to review Cars 3 on Blu-ray and digital download. Our family saw the movie in theaters over the summer and thoroughly loved it; it definitely carries more depth and character development — and less Larry the Cable Guy — than Cars 2. Cars 3 is now available on Blu-ray, DVD, and digital download through your favorite retailers.

Since receiving the Blu-ray and digital download about 1 1/2 weeks ago, my youngest son, who is now almost 13 years old, has watched it three times already, and yesterday one of our visiting Air Force Academy cadets wanted to take a break from his busy schedule: Cars 3 hit the spot for him.

Cars 3 is a feel-good movie on many levels: for the kids who will still enjoy Lightning’s timeless adventures, for the parents who will watch the mentorship between the wise experts and the naive novices, and for sports fans who will nod in understanding about how technology is always “changing the game.”

In our family, this film brought back many memories of when the original Cars came out in summer 2006. My oldest son was 3 1/2 years old, and his grandmother took him to see the movie as their special “date.” He came out of the movie absolutely hooked! Much like that montage in Toy Story when Andy’s bedroom transforms from a Woody cowboy theme to a Buzz Lightyear space exploration theme, our son’s world was transformed into race cars and his favorite characters from the film. Living in North Carolina at the time certainly made that easy, since much of the franchise’s ideas are inspired by the world of NASCAR.

As always in my installments of Disney Blu-ray and digital download reviews, I plan to focus on the bonus features and extras. Compared to some of the others I have reviewed in the past (cough, cough, Rogue One, cough, cough), Pixar does a nice job with a variety of bonus features. I’m going to highlight some of our family’s favorites here, and include some memories in the mix.

This was my favorite of the bonus features, because it brought back memories of my sons’ attempts to “collect ’em all.” This documentary takes you behind the scenes with how the Pixar animators played a part in working with Mattel toys to design more than 1,000 unique designs through the three Cars films. The feature includes interviews with Pixar animators, avid die cast collectors, and the toy designers to cover all aspects of the companion toys.

This documentary sent me to my external hard drive to try to find a photo of my now almost-13-year-old son sleeping with his favorite toys when he was a preschooler. I couldn’t find that photo, but I did find this one that put such a smile on my face!

“Miss Fritter’s Racing Skoool” is the exclusive short that’s now tradition for Pixar Animation Studio Blu-ray/digital releases (but not on the DVD). In this mini-film, Lightning and Cruz catch a television commercial advertising Miss Fritter’s (voiced by the amazing Lea DeLaria of Orange is the New Black) new venture, featuring the other vehicles from the Thunder Road track testifying how Miss Fritter changed their life. Lightning and Cruz are surprised at the featured guests in the last testimonials.

“Let’s. Get. Crazy.” takes viewers into the world of the figure-8-type of demolition derby. If you have seen Cars 3 already, the Thunder Road scene is replicating a type of demolition derby that the crew attended for the making the film. The featurette includes scenes from the real derby, combined with animators’ efforts to code the same scenes and capabilities they saw at the real-live event.

The Pixar animators addressed how difficult it was to code mud. Mud is a fluid, so while there are similar challenges to effectively showing water, such as in Finding Nemo and Finding Dory, they had to combine this with out-of-water properties, and include the weightiness that the addition of dirt would add.

Lea DeLaria is a featured commentator in this short, connecting the different facts they’re presenting, between the visit to the derby, the coding, DeLaria’s voicing of Miss Fritter, and director Brian Fee’s revelation that the Crazy 8 race almost didn’t make it into the film — at first it was a random diversion while Lightning and Cruz were making their way to the Thomasville track, but the crew was able to integrate the scene into the theme of Lightning training and mentoring Cruz Ramierez.

I’m not sure my sons remember their trips to demolition derbies then they were younger. For my husband and me, it’s a staple of our trips to the state fairs over the years. There’s just something about watching the crashing and destruction.

This six minute mini-documentary covers the hundreds of logos and advertisements that are snuck in throughout the Cars franchise films. Many of them are human-products edited for the world of Cars. Some of the ones that caught my attention were: Intersection (a dating service), Leak Less (a product for incontinence), and even Insuricare (Bob Parr’s company — from which he was fired — from The Incredibles).

The film’s crew and animators discuss the design considerations with placement of advertising on Lightning’s generation of cars, a “cereal box” look, versus the “next-gen” cars, which were designed to me more sleek and minimalist.

In addition, there’s homage paid to the old-school advertisements throughout the Thunder Road and Thomasville racetracks, as well as in the two bars seen in the movie: The Cotton Pin near the Thomasville track, and Miss Fritter’s favorite hangout near the Thunder Hollow track.

I have an affinity for billboards. While in many cases they’re annoying obstructions to landscape, there is some American history that I found interesting enough to write about back in 2013. The time and effort that went into designing this racing world, for which corporate sponsorship is a steadfast staple, is one of the many things that Pixar used to make the Cars world that much more realistic.

In closing, my family and I recommend Cars 3 on Blu-ray, Ultra HD 4K  and digital download, not just to enjoy the full-length feature, but also to enjoy some of the entertaining and educational bonus features. You’ll definitely want to consider this for your favorite motorhead for the holiday season. The movie is available now via Disney Blu-ray, digital download, and on DVD with limited bonus features. You can purchase the Blu-ray at your favorite retailers, while the digital download is available via Amazon, iTunes, and the new Movies Anywhere app (which took over Disney Movies Anywhere this fall).

Enjoy this video of the 95 reasons in 95 seconds of why Lightning McQueen is awesome. 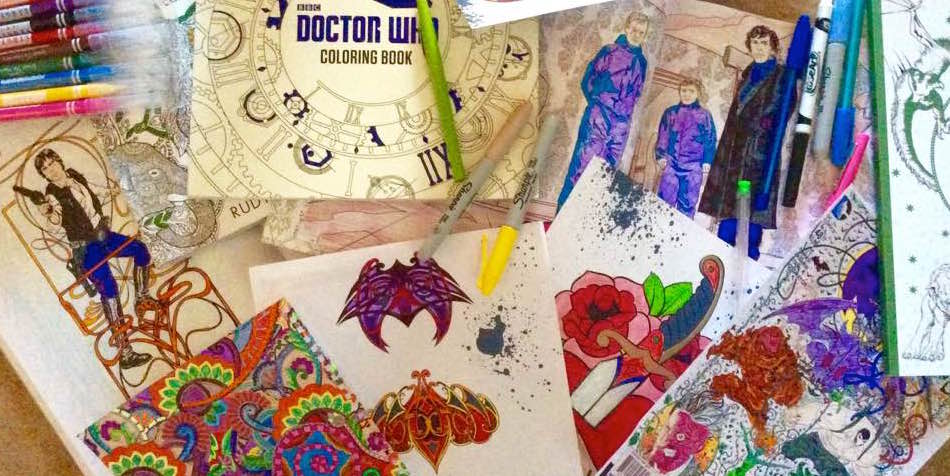 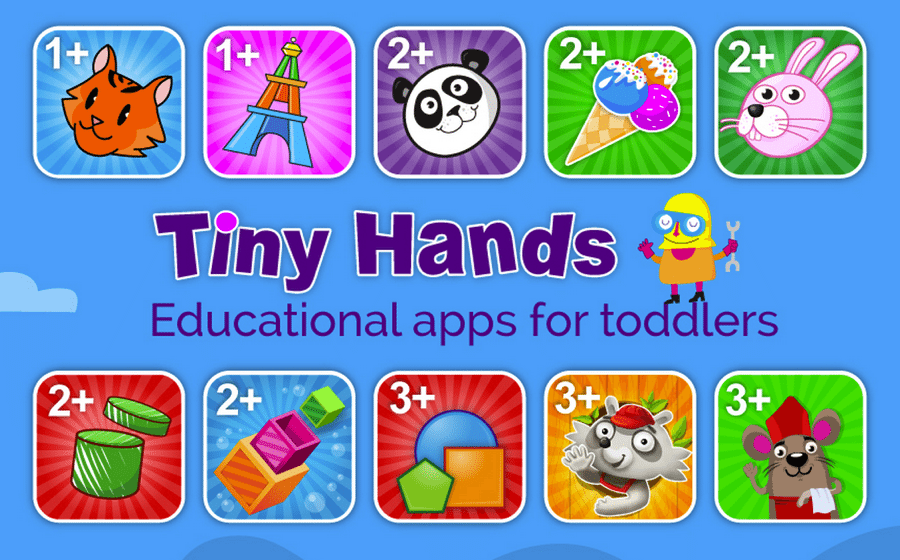 The Geeky Side of Pumpkin Carving: This Is the Droid You’re Looking For