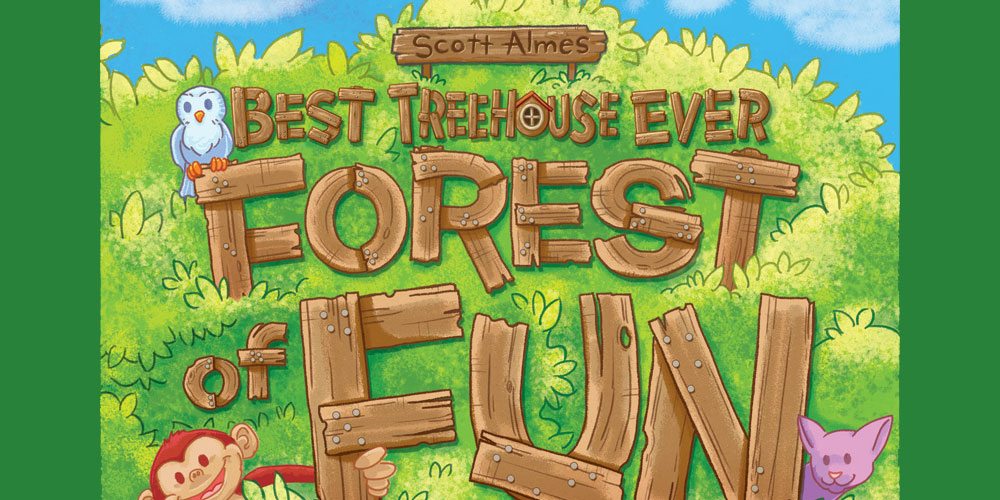 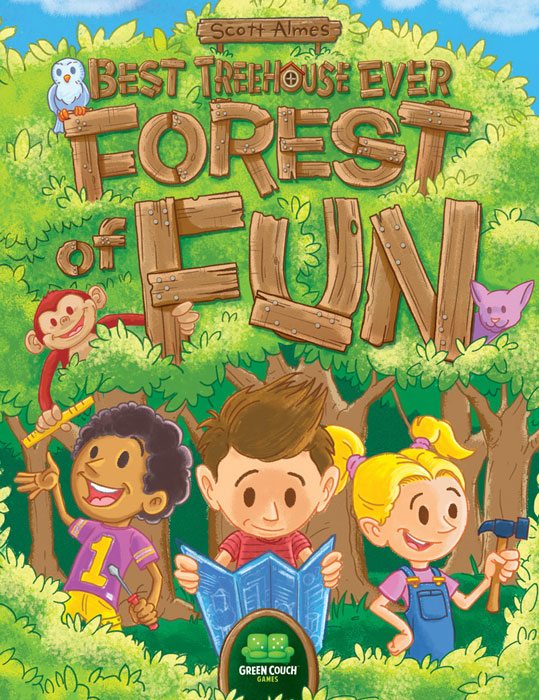 It’s time to build another treehouse! I know, the last one we built was the Best Treehouse Ever, but we’re gonna do even better—in the Forest of Fun!

What Is Best Treehouse Ever: Forest of Fun?

Best Treehouse Ever: Forest of Fun is a stand-alone sequel to Best Treehouse Ever and is for 2 to 4 players, ages 8 and up, and takes about 30 minutes to play. If you have the original game, it can be combined with Forest of Fun to accommodate up to 8 players. It’s currently seeking funding on Kickstarter, with a pledge level of $23 for a copy of the game (with additional pledge tiers available that include a playmat, the original game, or both). The game uses a drafting mechanic and is appropriate for kids and adults both thematically and in gameplay.

Note: My review is based on a prototype copy, so it is subject to change and may not reflect final component quality. My photos include a mix of finished cards from the original game and prototype cards from Forest of Fun.

Since Forest of Fun is a stand-alone game, its component list is very similar to Best Treehouse Ever. The primary differences are that instead of 72 room cards, a dozen of those are now animal cards, which score differently. The Game Changer cards are slightly different, with a “proposal” side and an “approved” side—these changes are only used if you have 5 or more players. The forest cards are the other big change—these are tarot-sized cards with various different locations and special abilities on them.

Each player gets a tree trunk base to build on, which has some details in their player color. I like that these are all individual and not just different colors of the same thing. The four player colors in this set will differ from the base set (pictured here): the base set includes yellow, red, blue, and orange; the new set will include purple, brown, grey, and green—that way if you combine the two sets, you’ll have eight unique colors. A stretch goal, if reached, will change the acorns to maple leaves in Forest of Fun.

The rooms (and the animals) come in six different colors. Each color represents a particular theme, and there are several different rooms of each theme. The rooms in Forest of Fun will be illustrated by Claire Donaldson—the original rooms (pictured here) were illustrated by Adam McIver. I haven’t seen the new rooms, but I imagine they’ll also be just as adorable.

Forest of Fun will also come in a bigger box, allowing you to store the original Best Treehouse Ever inside so that it’s all in one package.

How to Play Best Treehouse Ever: Forest of Fun

There isn’t a rulebook available online for Forest of Fun yet, but you can download the rules for the original game to get a sense of how the game plays.

Shuffle the animal and room cards together to form a deck. Everyone gets a forest card, a starting tree card, a balance token, and a hand of 6 cards. The Round Scoring cards and the Game Changer cards are placed in the center of the table. You place your starting tree in front of you, with the balance token on the center space. This token represents the balance of your tree. Note: be sure to allow plenty of room above your starting tree card, because you’ll be building up and out from there! Also place your forest card face-up on the table near you.

Each “week” or round will be five days. You pick one card that you want to build and then pass the rest of your cards to the player next to you. Once everyone has chosen a room, the rooms are revealed and added to the treehouse. Note that you can never go above 6 rows (including your starting tree card).

If you can’t or don’t want to build any of the rooms in your hand, you still pick one, and then when everyone reveals their cards, you just discard it instead.

Starting with the first player (the oldest player in the first round, and then the player with the most points in subsequent rounds), each player chooses one of the Game Changer cards and takes it. Then, in reverse order, each player places a Game Changer card on one of the six scoring cards (using the “approved” side if you have up to 4 players). The default score for a room type is 1 point. Two of the Game Changer cards will make rooms count double, and two will make the rooms score nothing. So you might try to double the red activity rooms if you have a lot of them, but somebody else might sneak in and make them worth nothing. Then, each player scores points based on how many rooms of each color they have in their treehouse. Note that animal cards are not rooms for scoring purposes.

The game lasts for three rounds, so by the end you’ll have up to 15 cards in your treehouse if you didn’t discard any. Some of the forest cards may give you the ability to play even more cards.

After the last scoring round, there’s a game-end bonus. For each type of room, the player with the most rooms will score 1 point per room—these are not changed by the game changer cards. In case of a tie for most rooms, nobody gets a bonus.

You will also score for the animals only at the end of the game. Each animal will score points based on how many rooms of its color are touching it. For instance, in the photo above, the red monkey card has three red rooms touching it, and the yellow owl card has three yellow rooms touching it—each animal scores 3 bonus points. If you have 0 or 1 of the correct color touching the animal, you actually lose 2 points, and if you surround the animal card with six matching rooms, you’ll score a whopping 9 points.

Why You Should Play Best Treehouse Ever: Forest of Fun

I reviewed Best Treehouse Ever back when it was on Kickstarter; I liked it then, and I like it now. It’s a nice card-drafting game that has some sneaky strategy in the game changer cards.

Building games are always fun to look at—Carcassonne, Kingdomino—when you’re incrementally adding to a structure over the course of the game, it’s fun to see what everyone has constructed by the end, and Best Treehouse Ever is no exception. The colorful, fanciful rooms in the original game are a delight, and I’m excited to see what new rooms they come up with for Forest of Fun.

As I said in my original review, the gameplay itself is pretty light, but there’s some fascinating stuff that happens when you throw in the game changer cards. Some rooms are going to be worth double, and some rooms are going to be worth nothing at all. When you’re building your treehouse, you don’t know yet which is which—but if you build a treehouse that’s entirely blue rooms, you can guarantee that somebody will try to keep you from scoring anything. Or you can hedge your bets, building a few of each room—but then you definitely won’t get any end-game bonus points.

In Forest of Fun, the addition of the animal cards means that you have even more incentive to focus on particular colors. Surrounding an animal with its favorite color will net you 9 points—not to mention you’ve probably got a pretty good shot at getting the 1-point-per-room bonus for having the most of that color. That’s not a bad score, even if those rooms don’t get a regular score each round. But if you try putting an animal in your treehouse and then can’t get any rooms to match it, it’s a costly mistake. (And, of course, since it’s a drafting game, it’s up to your neighbor to keep you from getting rooms of that color!)

The forest cards are another interesting tweak to the original. The abilities are varied, and I confess I haven’t had a chance to try them all out yet. There are some that allow you to unbalance your treehouse a little more, giving you more flexibility in where and when you build. Some let you play extra cards—either the card that you would discard at the end of a round, or cards that other players have discarded. Some forest cards let you set aside cards—either to play later, or to gamble on getting more points. There’s even one that lets you remove a game changer card right before scoring—talk about a game changer changer!

I like the fact that this will be a stand-alone, and that I’ll be able to accommodate up to 8 players by combining it with my original set. There are a lot of times when I’ve got 5 players for game night, which cuts out a lot of game possibilities, and now I can keep including Best Treehouse Ever in the mix!

For more information or to make a pledge, visit the Best Treehouse Ever: Forest Fun Kickstarter page! 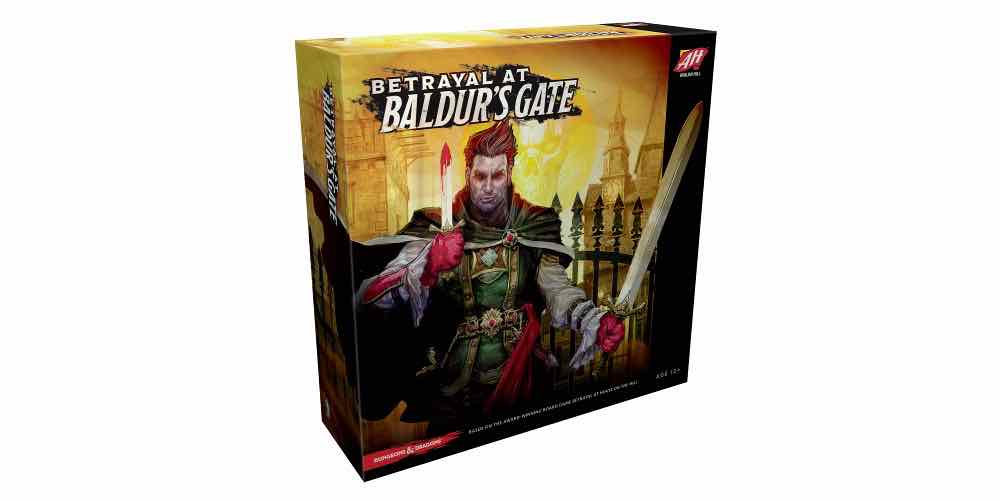 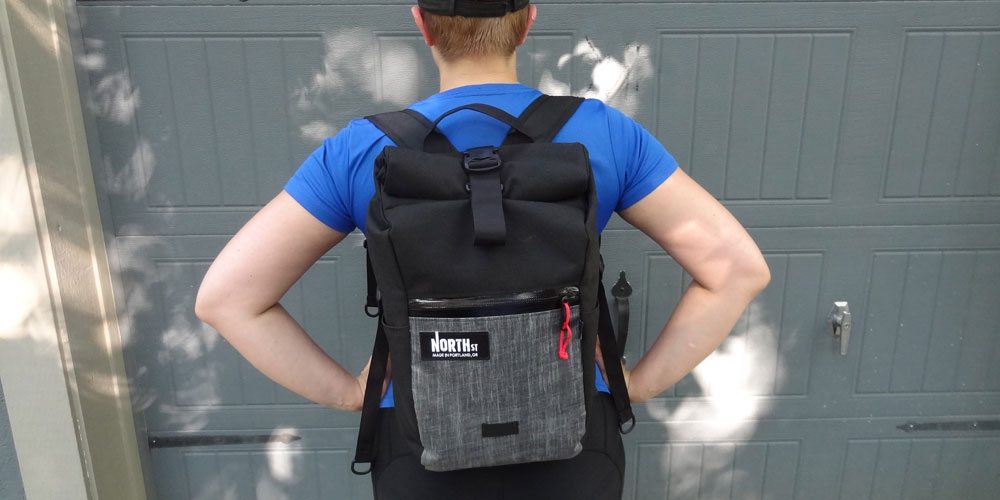 Get Ready for School, Work, or Play With North St. Bags