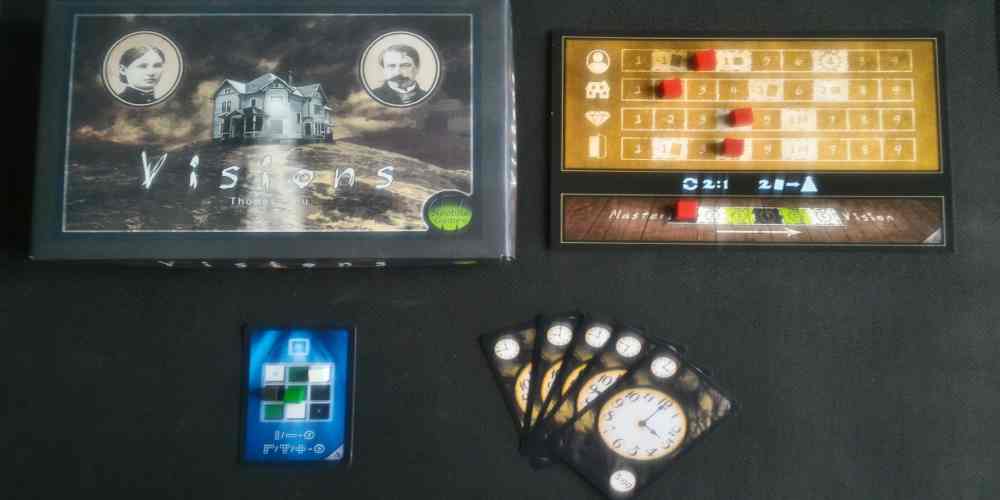 Visions is a card-based game for 2-5 players looking for funding on Kickstarter now. It has a steampunk/Victoriana feel, with a theme of spiritual contact from beyond the grave. The game has a strong aesthetic and has been designed with color blind players in mind.

The Yates family has been cursed for many years. The players act as mediums trying to contact family members long deceased. By creating connections with the spirits, the house in which they live, and a collection of lost jewels, players can build up enough mental influence to lift the curse from a venerable family.

Game Components: What’s in the Box?

The deluxe edition of the game also comes with a very nice player mat (made of mouse mat rubber) and Prediction expansion cards.

Note: I was sent a prototype copy of the game. The components I was sent (and have used in my photographs) are unfinished versions and will almost certainly be different in the completed game.

The aim of the game is to build up more Mental Influence than your opponents. There are a number of ways to do this and, at first, the game can seem bewildering. Depending on your learning style, it may be better for your first game to set up and get stuck in. Visions is definitely one of those games that is more difficult in the explaining than the playing.

Game time is slated as 60-120 mins, a fairly broad range, which is pretty accurate. Two player games can be squeezed in at around an hour. Additional players increase playing time.

How do I set up Visions?

Setup is simple. The “Family” Cards are all shuffled together and five of them are placed around the center card. There are particular positions in which the cards have to go (shown in the photo below, on the player mat (included in the deluxe version only)).  Each family card has a number of “Vision Stones” placed on it. Vision stones can be one of three colors: green, white, or black.

Each player is randomly given a “Vision” Card. The Vision Cards are what drive the game. They determine which color Vision Stones each player will be trying to collect, at any given time during the game. All cards have 9 squares, which can hold 3 of each color of Vision Stone. The pattern of Vision Stone colors is different on each card.

What can I do each turn?

The word “vision,” or derivatives of, comes up a lot in this game, so let’s try to break down the turn sequence for you.

The Time Cards are one of the many nice things in this game. They are each a clock face with the time on them, though in all cases the hands point at right angles to one another, along the 12-6 and 9-3 axis. They are, in essence, right-angled connectors that can join one of the five Family Cards to the center card.

Using their Time Cards, players must build connections to the Family Cards that are laid out. Each Family Card must be connected using a certain number of Time Cards (given on the card). These Time Cards are piled up on top of one another and must have the same right angle. It is possible to place several Time Cards in one go. The player that places the final Time Card has a vision and may take one of the Vision Stones off the corresponding Family Card.

What happens when I complete a Family Card connection?

Once the connection has been completed, the Time Cards used are removed but the Family Card remains if it still has Vision Stones on it. The Family Card can be used again until all its Stones have been taken. It can even be used one more time with no Stones present (in which case an extra Stone is taken from the bank), but after that, it is discarded and a new Family Card is put in its place.

I keep collecting Vision Stones, but how do I score?

Vision Stones are the key to scoring. If you complete a row on your Vision card, you get 2 Mental Influence. If you manage to position 5 stones in a cross, T-shape, or L-shape, you get 5 points.

Another way to score points is to advance the Master Vision tracker. These require that you pick up Vision Stones in the correct color, and must be completed in sequence. The Master Vision tracker scores more and more the further you travel along it. If you can make it to the end, you’ll have scored a whopping 21 points.

This sets up an interesting balancing act between collecting Stones on the Vision Card and completing lines. It’s hard to create the 5 Victory Point combinations and collect four Stones to advance the Master Vision track.

How do I make changes with Visionary Energy?

Are those all the rules?

Visionary energy can be switched between tracks at the cost of 2:1, i.e., if you need 1 energy in one of your tracks, you can burn two from another track to get it. This can be done any number of times in a turn.

If you have a surfeit of Time Cards, you may discard 2 to gain one Visionary Energy of your choice. (This must be done before you draw new cards.)

The more astute amongst you will notice that the top Family card can’t be connected to the center card with a right angle. To do this you have to go through one of the other Family cards. This will involve two right angled connections to make the link. Just to make things conceptually more challenging, this top card can be assumed to be in any of the four compass positions between the other family cards. It can, therefore, be accessed through any of the other family cards.

It is perfectly possible to play Time Cards on top of one another that don’t match. In which case the cards beneath those just played are discarded. This is a legitimate tactic to mess up the plans of your opponent, but remember you can only play Time Cards in one place on a single turn, so sabotage alone might not be reason enough to do so.

There are a few other rules quirks that I won’t mention here as they may confuse matters.

Players choose to play to a certain number of Mental Influence; 40 for 2 or 3 player and 30 for 4 or 5 players is recommended.

Why should I back the Visions Kickstarter?

Visions is a conceptually interesting game. I like the aesthetic; it’s Steampunky by not cliched. The rules are bewildering at first. They left me scratching my head, but this is a game that rewards diving straight in. As soon as you do, the mechanics of the game become much clearer.

What’s not so good?

I like the theme and aesthetic and I like the subtle variations in game mechanic, but they clash a little in playing. The mechanics of a turn are interesting, but it’s hard to get a sense that you’re a medium communing with the spirits.

With the prototype version I have, it can be difficult to differentiate the right angles on the clock faces. The clocks are part of the aesthetic but in game turns they are simply a right angle. It’s odd, but when you hold the cards in a fan, trying to tell them all apart is surprisingly difficult, or more, noticing which ones are the are the same is hard.

For example, 3 o’clock and 12.15 are the same in game terms, but end up in a jumble with all the other clock faces. Designer Thomas Neu is aware of this issue, and the visuals of the game should be simplified for the final version. It’s probably worth checking what the final design decision was, though.

One good bit of visual design is the use of color. Thomas is color blind and the use of black, green, and white for the Vision Stones is very deliberate. There is only one place where difficult to differentiate colors are found next to each other. This is on the Mental Influence Tracker and should have minimal impact.

The various mechanics in the game complement each other well. The Time Card placement mechanic is innovative. The generation of your Vision Stones, and then the various ways in which you can use them to generate victory points keeps the game interesting. I found that it can be tricky getting the right stone at the right time, so your tactics are continually shifting.

The ability to change things by manipulating your Visionary Energy adds another facet to gameplay. This again keeps you thinking about the best course of action and adapting your approach with each turn.

Finally, the fact you can interrupt your opponents’ plans, by suddenly producing the right number of Time Cards to pinch the Vision Stone they need, adds a direct competitive element which is fun whilst never becoming overly aggressive.

The funding target for Visions is a modest $9,000. There are two main pledge levels. The deluxe version has a very nice rubber mouse-mat material play mat. I’ve not seen anything like it for a non-miniatures game (it’s like these ones I reviewed, here), and it could be the way forward for improving the board game experience.

Visions is an intriguing little game, which at first seems overly complex, but once you start playing it’s easy to see how the game’s various elements interact with each other. Once you’re up and running, an unexpected level of tactical complexity comes to the fore. The best course of action is forever shifting, as you try to invoke visions, harness their energy, and ultimately, exert the most Mental Influence over the Curse of the Yates family.

The Visions Kickstarter begins today (7/25/17). If you’re intrigued by my review, do take a look at the project.

Disclaimer: I was sent a copy of Visions in order to write this review. 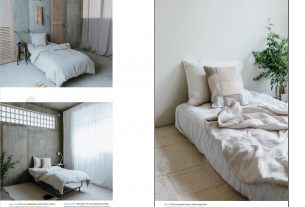 ‘Visit Space’ With Steve Thomas as Your Guide 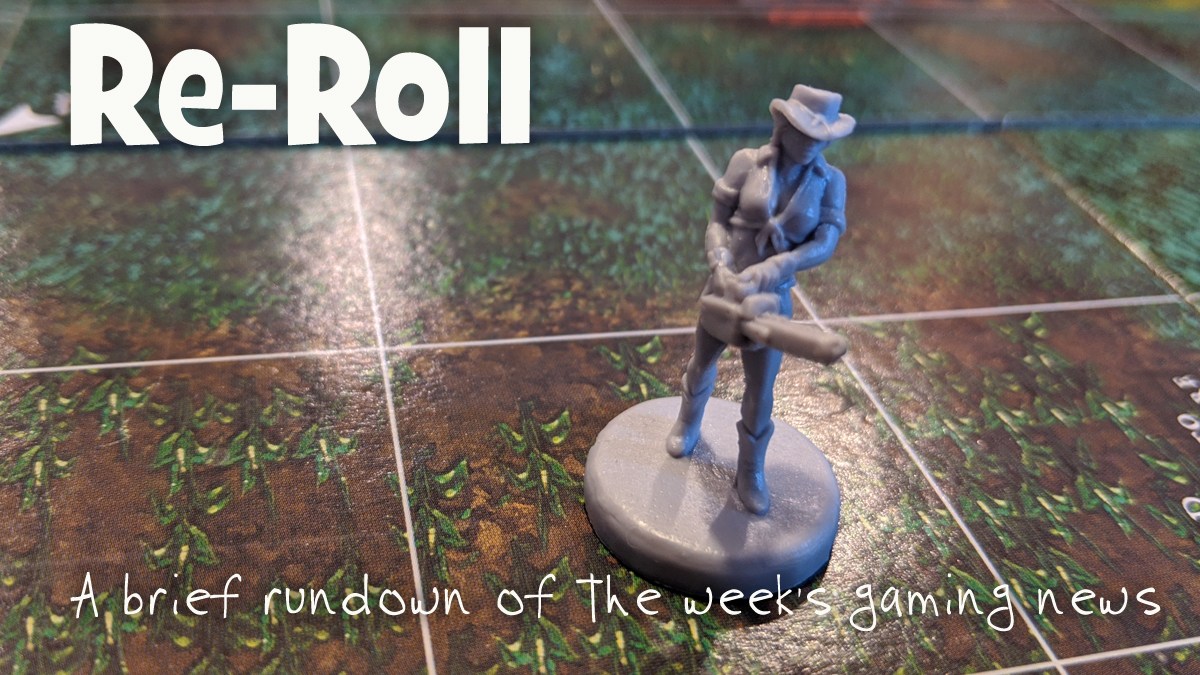