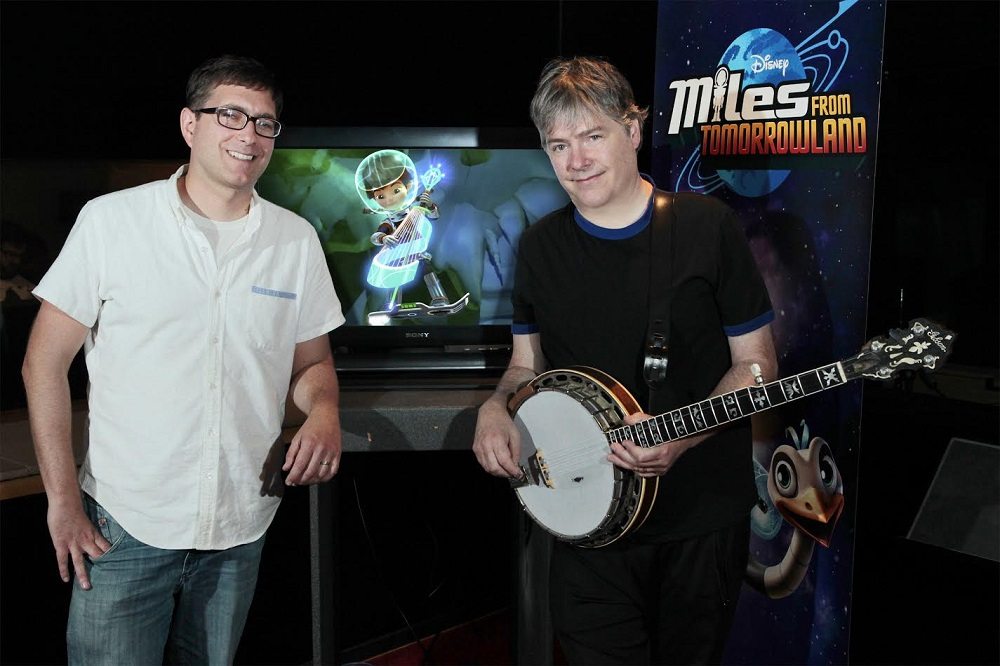 I’ve said this before, but this show is smart. And you’ll probably be smarter for watching it. In short, it’s a kids show I honestly don’t mind watching myself. Not only is it intelligent and entertaining, but it has one of the most impressive supporting voice casts in animation today. Regular characters are provided by Mark Hamill, LeVar Burton, George Takei, Bill Nye, Alton Brown, and Wil Wheaton!

(We’ve covered the show quite a bit in the past. Do check out my conversations with creator Sascha Paladino and guest stars Wil Wheaton and LeVar Burton.)

This week, the show is expanding its already impressive roster of guest talent to the world of music. Béla Fleck–or rather, his banjo–joins the show, and we had a chance to chat with him and Sascha Paladino. The episode (“Galatech: The Search for Plectrix”), which finds Miles and his sister Loretta on a search for an ancient musical instrument, premieres Saturday July 8 on Disney Junior.

Series creator Sascha Paladino and banjo legend Béla Fleck might not immediately strike you as running in the same circles, but let me dispel that misconception right at the top. The two are actually brothers, born 17 years apart. That age difference meant they didn’t really grow up together since Béla left home after graduating high school to hit the road and become a traveling musician.

Despite the distance, though, they still ended up crossing paths. They both went to the same arts high school (the Fame high school in New York City). Béla attended Music and Art High School, and Sascha went to its later iteration called LaGuardia High School of Music, Art, and Performing Arts. Even though they were 17 years apart, they still had some of the same teachers! And they both readily admit that being surrounded by so many creative people during their formative years really shaped who they would become.

GeekDad: There’s a lot of controversy now about whether you need to have an academic, “formal” training in the arts if you want to pursue it professionally. Do you think that experience in high school prepared you for your eventual careers?

Béla Fleck: The more of a complete person you are, the more of a complete artist you’re going to be. That’s like saying, “If I’m an artist, all I should learn how to do is use a paint brush.” But what are you painting about? What’s your story? Who are you, and why should we care about what you paint, or draw, or write musically? I think having a complete life is what’s important.

Sascha Paladino: Being immersed in the arts in high school, I knew I wanted to be some kind of writer–for TV or movies or something. I thought about going to film school for college, but I talked to someone who was working in the film industry when I was applying to colleges, and he had some great advice. He said, “You go to school to learn how to think.” That really stuck with me. So I decided not to study film in college. I wanted to just learn about the world and have something to tell stories about. 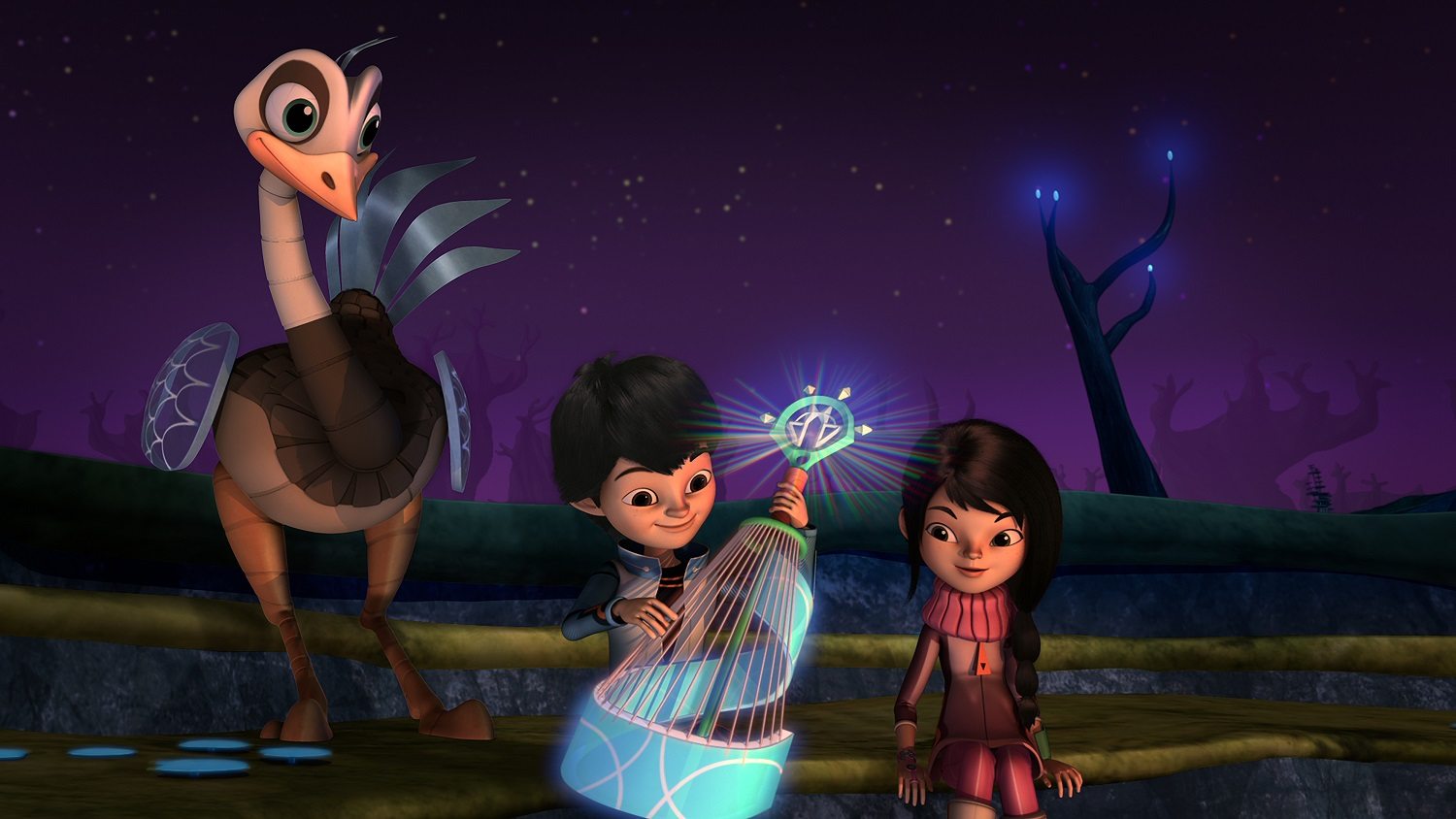 GeekDad: You guys have obviously worked together before, but how did this collaboration for Miles From Tomorrowland come about?

Paladino: We first worked together–and actually got to know each other, since we didn’t grow up together–when Béla took pity on me (since I was between TV jobs) and hired me to be a road manager for a short tour he was doing. I wasn’t a great tour manager, I have to say, but I said I’d do it if I could make a movie about the process and the tour. So I did, and that was really successful and fun. We made this short film that won some awards, and it was just a great collaboration.

As a result, Béla asked me to work on a much bigger project, which was this documentary called Throw Down Your Heart. We went to Africa for five weeks. Béla played music, and I made a film about it–exploring the roots of the banjo and collaborating with incredible African musicians. That was the longest time we’d ever spent together. It could’ve gone either way, but luckily we actually liked each other after five weeks.

That experience was life-changing for me. I got to see Africa not as a tourist but as a professional and getting to watch Béla work was incredible. It really opened people up. There were language barriers, but once they heard Béla play the banjo, their faces would light up. And musicians who were on the same level as him would start jamming. It was amazing, and it was all about making these connections.

Fleck: Yeah, and Sascha was even sneaking some of the names of the African musicians into Miles From Tomorrowland, such as characters named Oumou [after Oumou Sangare] and Haruna [after Haruna Walusimbi]. Then he came to me and said he wanted to do a show about the banjo and how it breaks down walls. How you can use it as a tool to communicate, especially with other cultures, to promote peace and understanding.

And that’s really the mission that my wife Abigail [Washburn] and I are on. She does it with China. She took her banjo to China and really opened up doors and created a lot of warmth and understanding between cultures. And I discovered the same thing on State Department tours and cultural ambassadorships. And I discovered that if I started jamming with local musicians in Tunisia or Morocco or India, everybody would light up. They couldn’t stop smiling, and I thought there’s a lot of power to this. This idea of breaking down barriers with music. And Sascha just ran with that idea.

Paladino: And it totally fit with Miles From Tomorrowland as a whole. When I created it, I wanted the mission of Miles and his family to connect the universe. We’ve done a lot of stories about interacting with aliens who are different from you and trying to communicate with those you don’t understand. But we hadn’t done an episode where music was used as a tool of communication and connection. I really wanted to do that.

So I thought how I could make this episode be a sequel to Throw Down Your Heart. It could expand on the themes and fit it into the world of Miles From Tomorrowland. It’s alien cultures that we’re crossing, but we’re using music as a way to do it. It seemed like a natural idea for Miles to have this instrument we call the plectrix that has a unique sound and have him communicate with an alien that makes a slightly different sound.

Béla’s banjo can sound like anything, and banjo music kind of sounds like alien music anyway. I thought it would be cool to have Miles play this instrument with special powers and have him communicate with an alien who also sounds musical. So we ended up having Béla play both the instrument and alien sounds using different banjos.

GeekDad: Béla, looking at your tour schedule, it’s amazing that you can find time to do anything else because it seems you’re always on the road. What factors do you weigh when choosing to work on a new project? Aside from the opportunity to work with Sascha again, what drew you to working on Miles?

Fleck: I look for projects that offer the potential for growth. Stretching myself musically and learning new techniques. I have to break new ground in some way. And working with my brother, who I’m super proud of, really fits that criteria. Plus, it really fits with the space-age, forward-thinking, Flecktone approach that I try to have with the banjo. But I was also able to do some improvising to animation, which I’ve never gotten to do before.

GeekDad: You’ve had a lot of great guests on the show, but is this the first time you’ve had a musical guest?

Paladino: Yeah, it was! And it was so cool to me. We’ve had these amazing guests from the sci-fi world–such cool people! But nobody’s cooler than my brother! But we’ve also had the cream of the crop, you know? We’ve had Luke Skywalker! And Béla, to me, is the Luke Skywalker of the banjo. And having a musician who never opens his mouth but communicates through music just really fit with the theme of the episode.

On Throw Down Your Heart, Oumou Sangare had this great observation and said that Béla speaks with his fingers. And I think, in a way, that quote connects directly to this episode. The idea that these characters are expressing themselves not with words but through the notes that they’re playing and how they’re playing them.

Fleck: Yeah, and that’s a great thing to teach kids. There are a lot of different ways to express yourself. 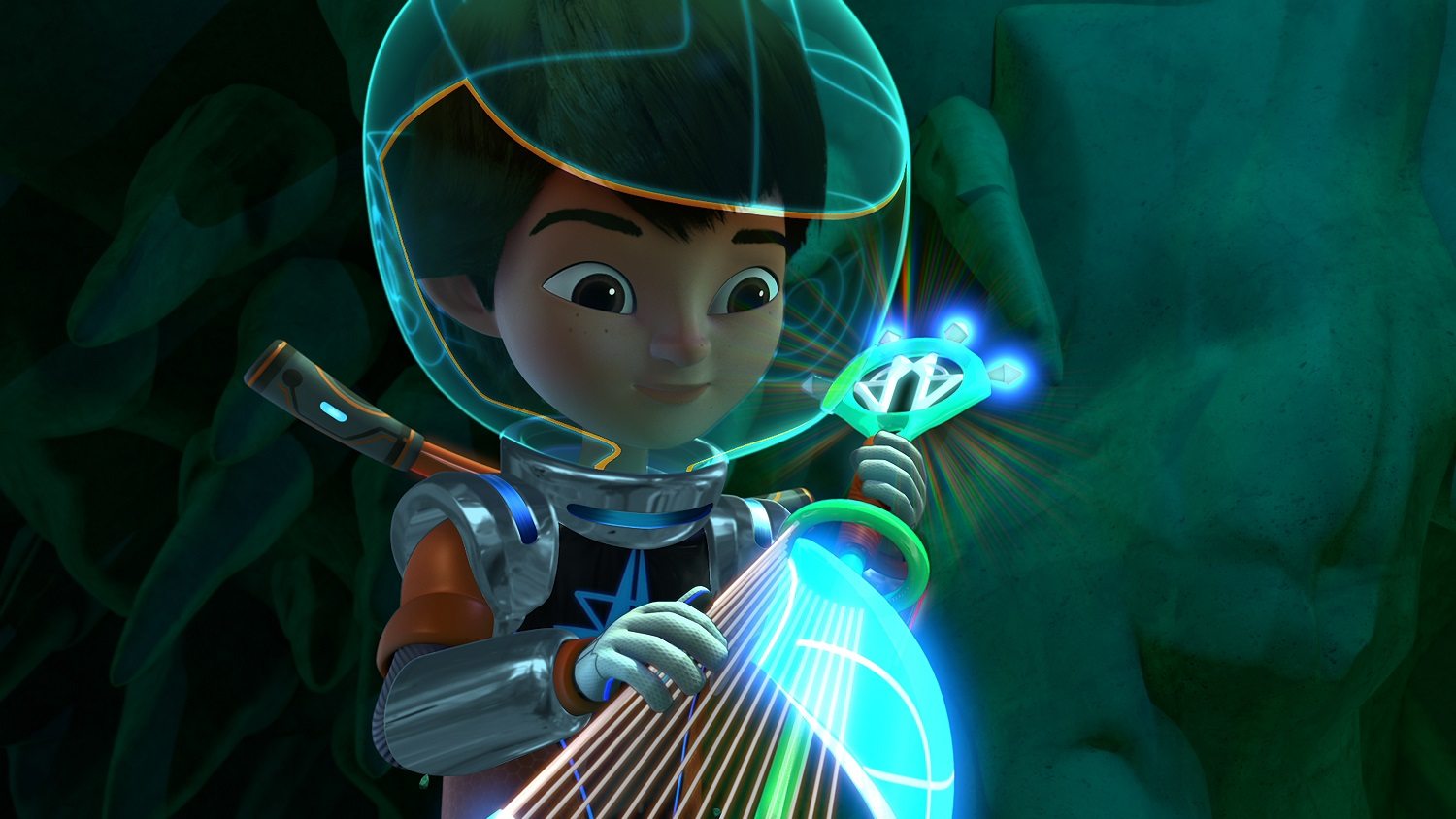 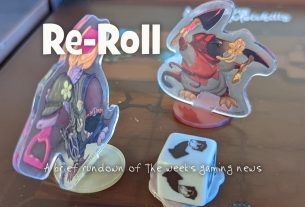 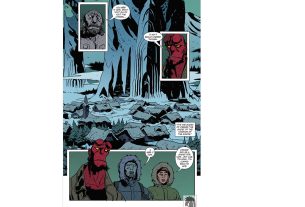 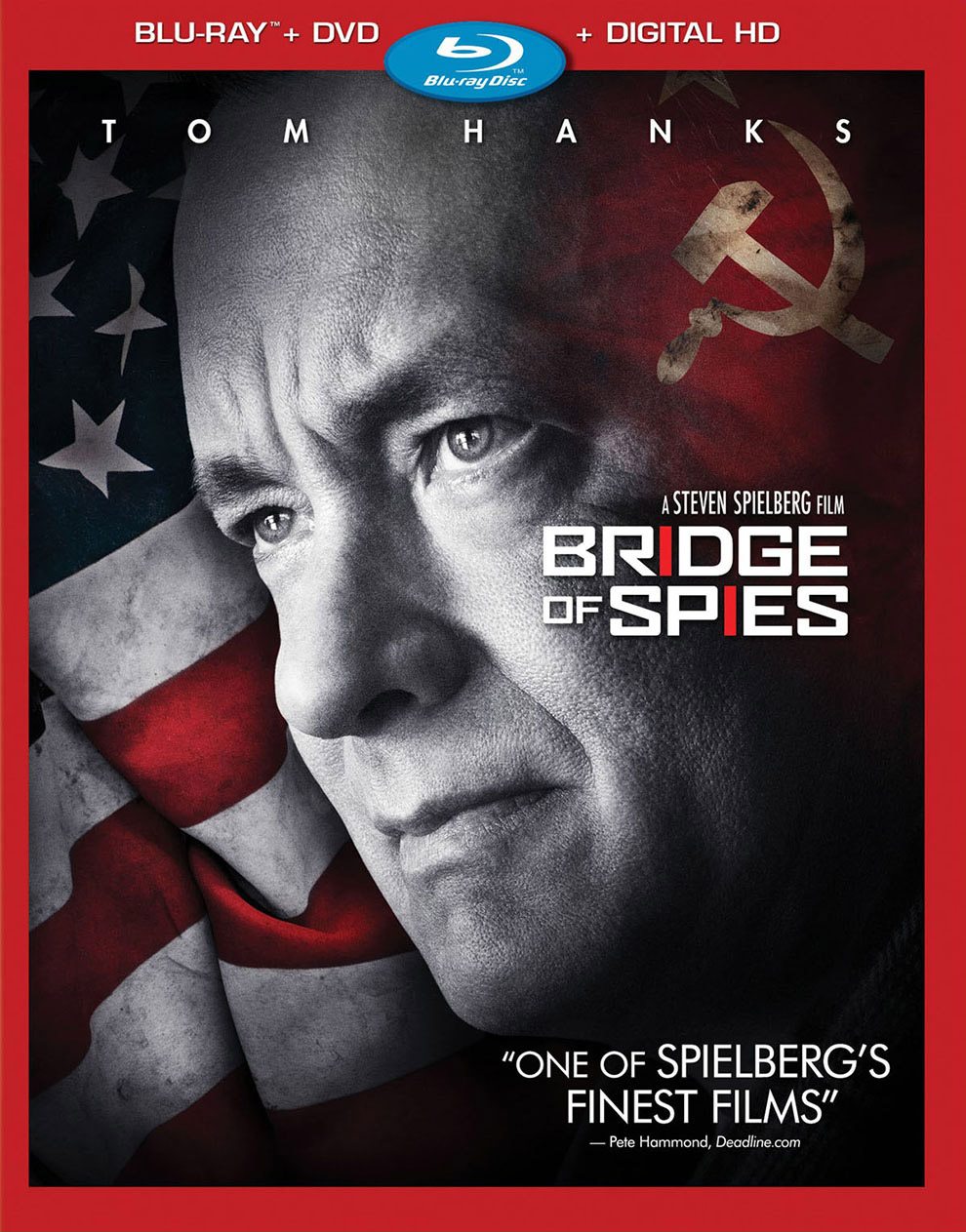