Insight Editions brings all sorts of fantastic to the world. From their geeky tour guides to comics history to concept art I have yet to take a look at any of their books and not immediately want to make it mine.

Insight was kind enough to send me a copy of Peggy Paul Casella and Albert Yee’s The Teenage Mutant Ninja Pizza Cookbook to review and I enjoyed it just as much as I have all of their other books.

Let’s start with the foundation of any good pizza: the crust. The whole wheat dough recipe is the most fail-proof one I’ve found (I’ve made it twice and it rose perfectly in completely different temperature environments, quite a feat for a whole wheat variation) and suffers not from that weird textural thing to which a lot of non-white flour crusts fall prey (don’t worry, there are traditional crust recipes as well). The book also has a section entitled, “Masked Mutations,” which explores, among other things, crust alternatives such as portobello mushrooms (which works really well), zucchini, and whole wheat pita bread. Excellent for those wanting to cut carbs or needing to go gluten free or vegan. 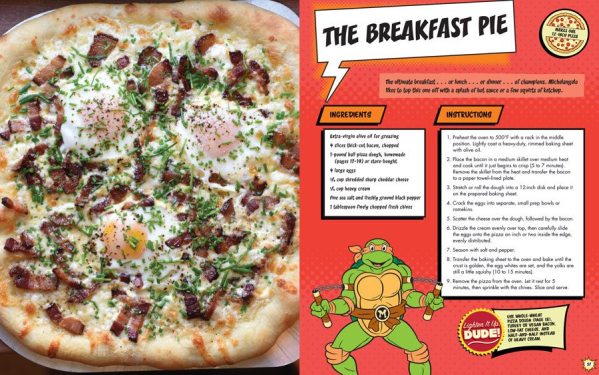 From there, things get increasingly wild and fun. The Teenage Mutant Ninja Turtle Pizza Cookbook features tons of recipes, from traditional pepperoni to pizza potstickers to s’mores dessert pizza and all of them can be easily tailored to individual likes, needs, and dietary restrictions. Both of my kids, even super picky boy, tried something new in the course of devouring their chosen pie and both said they would have that new thing again. I KNOW, RIGHT? Also? The seven and four year olds begged to help me make dinner, specially Zora, who was pretty much as excited as I’ve ever seen her about food and she, like all proper young ladies, likes food a lot. I KNOW AGAIN, RIGHT?

Don’t take my word for it, though. The girl child absolutely insisted on doing a video review. It’s possible I’ve created a monster.

Apologies for the two parter. My sophisticated recording device (aka: my phone) ran out of memory right in the middle. Any of you who have ever had a four year old certainly understand that there is no “taking it from the top.”