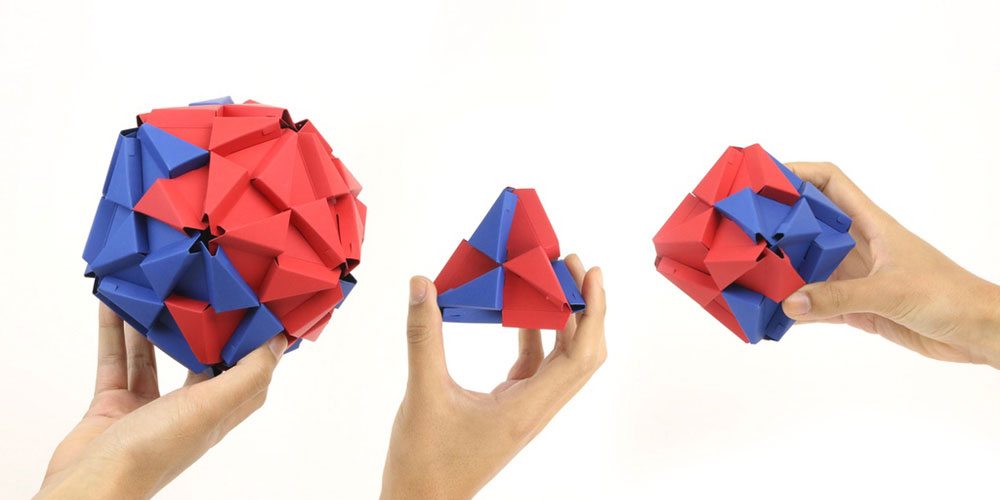 Here’s a Kickstarter project that was pitched to me as “Origami meets LEGO”: Troxes are paper forms that you can use to assemble solid shapes that then interlock with each other.

New to Kickstarter? Take a look at our crowdfunding primer.

Each Trox starts off as individual flat sheets of paper, sort of triskelion-shaped. You fold along the lines connect the sheets to each other, and they build various shapes like tetrahedrons, octahedrons, and icosahedrons—or, as I think of them: d4s, d8s, and d20s. Each face of the polyhedrons has three raised triangles, allowing the pieces to fit together into large configurations.

I was sent a few samples—not enough to create the big bird or scavenging beast shown on the Kickstarter page, but enough to play around a little and see how they work. The paper itself is a stiff cardstock called Plike, which has a soft surface but is stiff enough to hold its shape well. (You may have come across the material used occasionally as a book cover, which gives it a velvety feel.) My daughter and I assembled a couple of tetrahedrons so we could see how they stick together.

If you like papercraft, you should definitely check out the Troxes Kickstarter page. There are several pledge tiers ranging from a 50-piece starter kit ($29) to a 2,000-piece classroom set ($550).

An Electrifying Performance by ArcAttack