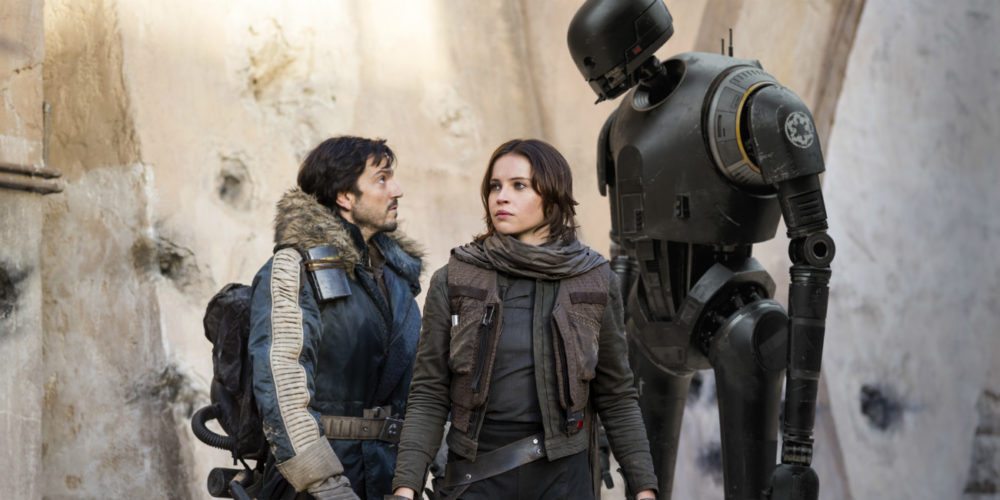 Finally, we have the Star Wars prequel we’ve always wanted, even if we didn’t always know we wanted it. Rogue One: A Star Wars Story has a different feel than the previous movies, but that’s refreshing more than it is distracting, because it lets the film tell its own story separate from the story we already know, even if very obviously tied to the original 1977 film (AKA Episode IV: A New Hope).

There is, of course, more to Rogue One than that, particularly when it comes to what parents might want to know before they take their kids to see it. Here’s a (hopefully) handy guide, carefully avoiding any spoilers beyond what’s shown in trailers and, of course, knowledge of Episode IV.

Yes. If you are interested enough to have read past the opening of this article, you will enjoy it. I’m a die-hard Star Wars fan (I died hard when Phantom Menace came out), and I loved every minute, but you don’t need to be a die-hard fan to like it. Rogue One is the best new movie in the saga to hit theaters since 1980. It’s exciting and funny, and has excellent special effects, but it’s way more than that: It’s the best prequel I’ve ever seen, and I mean that without hyperbole. I can’t wait for it to come out on home video so I can watch it back-to-back with Episode IV, because the story flows completely naturally.

The acting is superb. Felicity Jones and Diego Luna are brilliant, Forest Whitaker is as good as always, and Mads Mikkelsen proves that he can convincingly play characters other than villains. The rest of the cast shines, too, albeit slightly less brightly.

If they have seen and enjoyed Episode IV at least once, they absolutely will. In the tradition of the other movies in the franchise, you see a lot of spaceships shooting at other spaceships, and you see people die on screen, but there’s almost nothing visible in the way of injuries or blood. It’s rated PG-13, but honestly I would have taken my kids to see it even when they were six or seven. Basically, if your kids can handle Empire Strikes Back, they will have no problem handling this. There’s plenty of cool things to look at, and a lot of jokes that even kids will get.

That being said, much of the movie’s first hour does move very quickly between locations, so some littler kids might have trouble following the story. And the first minutes of the movie include a young girl in peril observing her parents in even more peril, so kids who might react badly to that might be best either kept home or brought into the theater after that scene (around ten minutes into the film, I think). ADDED 12/16/2016: On reviewing the film, I’m no longer sure I would have taken my kids to see it when they were that young. There are a lot of on-screen deaths on both sides of the conflict.

3. How does Jyn Erso compare to Rey from The Force Awakens?

Rey was a great character who kicked serious butt; even so, a lot of the butt-kicking she did was reactive. I’m not saying that’s a bad thing, but Jyn is an even stronger character than Rey, largely because she’s a more active participant in the plot. You may also be glad to know that the movie definitely passes the Bechdel-Wallace Test.

4. Where does the comic relief fit on the C3PO to Jar Jar scale?

Nowhere near Jar Jar, I’m happy to say. K-2SO as voiced and motion-capture-acted by Alan Tudyk (who seems to be well on his way to becoming the next Jim Cummings or Frank Welker) is very drily humorous, sort of the way C3PO might be if he were intentionally funny instead of accidentally. He has none of the out-of-place slapstick or borderline-racist speech pattern of Jar Jar.

Just before the hour mark (Rogue One is two hours, 13 minutes long), General Draven and Mon Mothma discuss the weapon being built by Jyn’s father Galen. The next several minutes are mostly Jyn talking about something the audience has already seen, so it’s a good time to duck out for an appointment with nature.

No. There is absolutely no content after the credits start rolling.

The preview I saw was in 2-D and at no point during the movie did it occur to me that it would have been better in 3-D or IMAX. I’m sure it’s a completely engaging movie no matter how you see it, but I can’t personally attest to that yet – I’ll update this article Thursday night after I’ve seen it in IMAX 3-D with my family. ADDED 12/16/2016: Having now seen it in IMAX 3-D, my advice is to save your money and see it in standard 2-D. It was nice to have more depth in a few scenes, but overall I thought the 3-D detracted from the experience more than it enhanced it. The darkening effect that the 3-D conversion process necessitates made several scenes more difficult to follow, and there’s so much to see in so many scenes that the huge IMAX screen made it hard to know where to look. (The latter was reported by my family, as I was seeing the movie for the second time and thus already knew its flow.)

8. Do I have to have seen any of the original movies to enjoy it?

Rogue One is essentially the story of what happened just before Episode IV. You could see it without having seen Episode IV, but there’s no mistaking the new film as anything other than a prequel – you’ll be much more satisfied with it if you know Episode IV pretty well.

9. How does it handle the chief problem with prequels, i.e. that the audience already knows how the story ends?

I don’t know how the filmmakers accomplished the task, but it really never occurred to me while watching that the end was predictable. Even though you know that the Death Star plans will make it to the Rebel Alliance, the characters and story are so engaging that that doesn’t matter. And there are plenty of surprises along the way.

10. Avoiding spoilers, how is Rogue One different from the previous movies?

The most noticeable changes are that there is no opening crawl and the musical motif has changed. And of course the fact that it doesn’t have the word “Episode” in its title, but I think that’s because calling it “Episode 3.999999” would be cumbersome, and not just because you can’t use decimals with Roman numerals. Rogue One really is the story of what happened just before Episode IV, to the point where, if Peter Jackson had started the franchise instead of George Lucas, Episode IV would have included it and it would have been four hours long. Not that that necessarily would have been a bad thing.

Boba Fett Helmet Is Definitely One For Your Cargo Hold

6 thoughts on “10 Things Parents Should Know About ‘Rogue One: A Star Wars Story’”