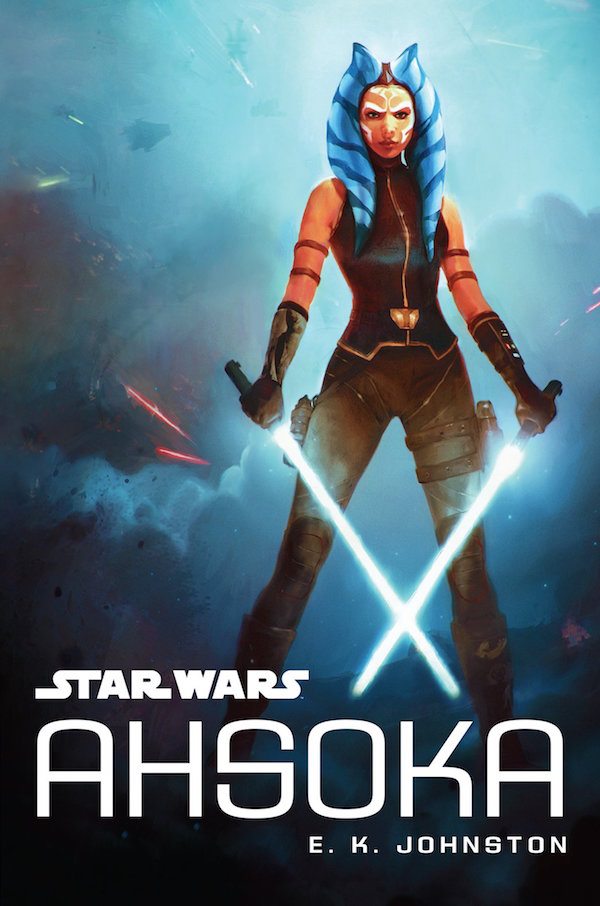 **This review contains mild spoilers about characters and events in Ahsoka, but it is mostly spoiler-free in terms of plot.**

So, a quick bit of history about me. I grew up steeped in Star Wars fandom, and I was a collector during the “Dark Times” of the late 80s when it was essentially a dead franchise. Then, in 1991, we got a phenomenal 1-2 punch out of nowhere in the form of Heir to the Empire and Dark Empire. The world had changed. Star Wars was back, and the fledgling “expanded universe” had been born.

Like every other Star Wars fan in the early 90s, I tore through Timothy Zahn’s trilogy, many of the other novels, and the early Dark Horse comics. The comics were mostly fantastic, but if we’re being honest, the novels really covered the spectrum in terms of quality. Some were great. Some…not so much.

Within a few years, I had stopped reading them altogether. But my goodness, they kept getting published. As recently as 2013, the Expanded Universe was still being expanded. Star Wars had become a deep, intricate web of interconnected stories that spanned dozens of novels and hundreds of thousands of pages. It was a bit daunting, and—to be frank—I never had much interest in diving back in.

Then, in 2014, everything changed again. Disney and Lucasfilm rebranded almost every story from the previous 30 years as Star Wars Legends. They were no longer considered “canon.” This was a huge risk (that still ruffles more than a few feathers), but it cleared the deck to reboot the franchise, untangle the mess of conflicting stories that had been told, and develop a consistent, cohesive storyline in advance of The Force Awakens.

Since then, I’ve read every novel (with a couple exceptions) in the “new canon,” and I haven’t felt betrayed or disappointed with a single one of them. They’ve all been pretty great.

“Her authority was gone; her power remained.”

But E.K. Johnston’s Ahsoka is probably the book I’ve been anticipating the most. When The Clone Wars animated series debuted in 2008, we were all introduced to Anakin Skywalker’s new padawan, and I’d argue that Ahsoka Tano was the most vital new character introduced to the saga since the original trilogy (Expanded Universe included). Over the course of the show’s six seasons, that became abundantly clear. Ahsoka was something special.

So a novel focused on Ahsoka’s time between the end of The Clone Wars and the beginning of Rebels was a hugely thrilling proposition to me, and grabbing an advance reading copy all the way back in July was one of the highlights of San Diego Comic-Con for me. 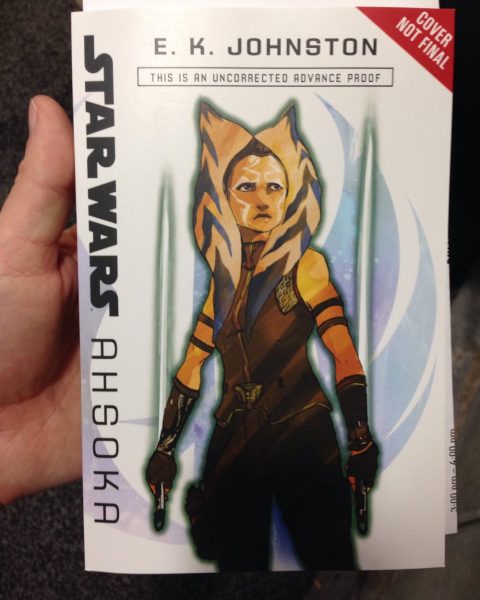 So how is it? Does it meet my hopes and expectations? For the most part, the answer is an enthusiastic yes.

The book takes place shortly after the events of Episode III: Revenge of the Sith. Darth Vader is already out in the galaxy somewhere, though he’s little more than a rumor at this point. Ahsoka, having escaped Order 66 mostly because she had left the Jedi Order (see The Clone Wars) is adrift in the galaxy and going under the name Ashla. She’s doing her best to keep her head down, stay off the radar, and not use her Force powers at all.

In other words, when we first meet her here, she’s on the run and in denial about who she is. But, as the old saying goes, you can take the Jedi out of the Order, but…

“Even if she was no longer a Jedi, she had too much training to turn her back on people in need. She would help them fight.”

Ahsoka ends up on the small agricultural moon of Raada, and it’s there that she meets a small band of farmers who almost immediately take her in. At this point, I have to credit Johnston for not falling into the sci-fi trap of ridiculous character names. There are far too many stray apostrophes and difficult-to-pronounce names in Star Wars as it is, so it’s refreshing to read about people like Kaeden, Miara, Selda, Neera, and Vartan.

Undercover as a mechanic on Raada (fixing malfunctioning droids and broken farming implements), Ahsoka quickly becomes close to sisters Kaeden and Miara. All seems to be going well…until the Empire arrives. Of course.

I don’t want to get too spoilery, but Ahsoka soon finds herself in the middle of a minor rebellion on Raada, and her Force sensitivity is…discovered.

This is a Star Wars book, so there are bound to be references to more familiar characters and places (even if it’s just a bit of fan service). I’d be lying if I said these didn’t exist in Ahsoka. There are a few offhand references to planets we already know, and there are a few characters who play a minor role in the second half of the book that are good to see. But for the most part, they all feel appropriate to the story Johnston is telling. (Most of these references pop up in several brief interstitial chapters that fill in a few blank spaces in the narrative and function more or less as Ahsoka’s memories.) However, there are thankfully no egregiously distracting cameos just for their own sake.

My only real complaints with the book are with the pacing and the villain(s). Ahsoka is technically a YA novel, so it comes with a lower word count than an “adult” novel would have. Therefore, many of the events feel too sped up to me. Everything happens very quickly: the Empire arrives on Raada, a rebellion forms, characters are captured and rescued, and Ahsoka makes several significant, life-altering decisions.

Don’t get me wrong – the story is compelling, and the book is incredibly well written. I just feel like this story would’ve definitely benefited if it had more space to breathe…if Johnston had the pages to dive deeper, explore the characters a bit more, and slow down the pace of events.

“The place would’ve driven Anakin to distraction, unless he somehow managed to arrange for podraces. No real technology to fiddle with, nothing dangerous to protect hapless villagers from – just work and home, work and home. . . . Master Obi-Wan would have said Raada was a good place to relax and then somehow stumbled on a nest of pirates or a ring of smugglers or a conspiracy of Sith. Ahsoka – Ashla – was hoping for something in the middle: home and work, and just enough excitement to keep her from climbing the walls.”

The bigger issue Ahsoka (the book) has, though, is with the “bad guys.” Johnston is clearly telling Ahsoka’s story here. She’s bridging the gap between when we last saw her on The Clone Wars and when she reappears on Rebels. She’s showing us how those white lightsabers came into being, and she’s sowing the seeds for Ahsoka’s role as Fulcrum.

The Empire, however, is never seen as a real threat. Yes, they invade Raada and make life a living hell for the local population, but the only named Imperial officer – Jenneth Pilar – is little more than a background character (despite some great characterization and real potential). The true antagonist of the story (a previously unknown Inquisitor) shows so much promise but ultimately feels wasted.

Still, the book is set in a time when the Empire was still finding its footing. The Emperor was just expanding his influence, Darth Vader hadn’t really arrived on the scene yet, and there were power struggles all across the galaxy. The lack of a truly powerful villain feels like a missed opportunity, but it totally makes sense.

In the end, these are minor quibbles with an otherwise great story about Ahsoka Tano, and I heartily recommend it.

But the biggest question still remains: What if you haven’t watched all (or any) of The Clone Wars or Rebels? Will you still understand and enjoy Ahsoka?

First of all, you don’t need to have seen any of Rebels. There is one (somewhat significant) reference you will miss, but it’s not crucial to understanding or enjoying this book.

What about The Clone Wars? This one’s tougher. I mean, it would obviously help if you know who Ahsoka Tano is and understand the basics of her history. But, honestly, all you really need to know going in to Ahsoka is that she was once a Jedi padawan who left the Jedi Order. And if you don’t even know that, Johnston’s story will make this very clear. Everything you need to know about Ahsoka Tano is included in the book.

So do you need to have seen every episode of the animated series? Definitely not.

Pick up Ahsoka, read it, enjoy it, love it, and then go watch Ahsoka’s journey through the two shows. They’ll keep you busy for a while.

And as an added bonus, the audio version of Ahsoka is narrated by Ashley Eckstein, the voice of Ahsoka Tano on both The Clone Wars and Rebels. The clip above is from the book. Do check it out. It’ll make a great companion on your next roadtrip or commute.

“There was no one way forward for her anymore. She would have to make decisions like that over and over again, but it was always going to be her. Ahsoka Tano.”

Cult of Lego on Boing Boing