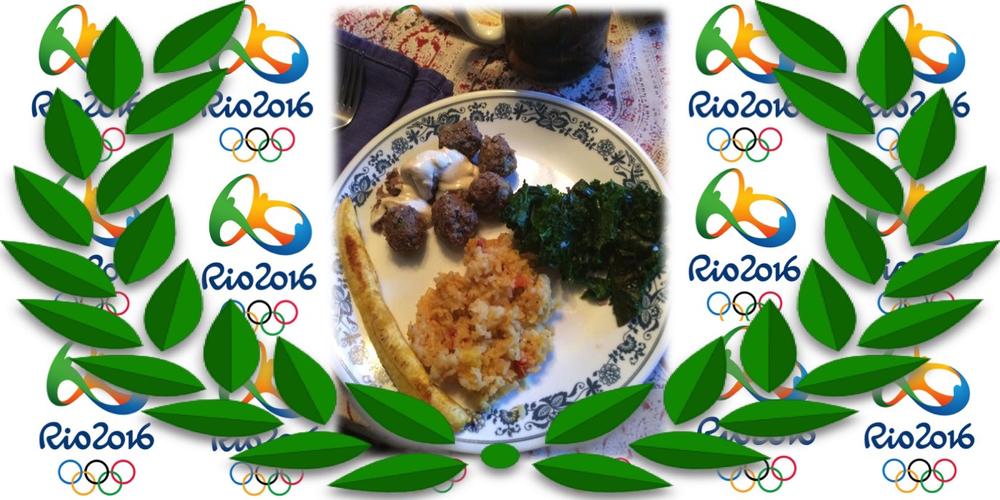 We love the Olympics–even watching the winter games! Being a GeekMom, I’ve gone a little overboard throughout the years, using the host country as a springboard to dive (yes, I did just do that) into the history and culture of the host country with my kids. It has varied from year to year, but one constant is watching the opening ceremonies with a big dinner inspired by the host country. Sometimes it’s easy (the Beijing menu was delish!) and sometimes a challenge (I don’t even remember what we put together for Vancouver).

This year, I kept asking other people about Brazilian food and the only constant was “Meat. Lots and lots of meat. On a stick. They just keep giving you meat.” This was the experience of friends at Brazilian restaurants. Surely there must be more to a Brazilian menu than BBQ? Not that I’m a vegetarian, but I do like variety. Interwebs to the rescue! I easily found a yummy assortment of dishes. Apparently, Brazil is quite the melting pot, so it was a good lesson in that culture just putting together the menu: Native Indians, Portuguese, African, Japanese, Arab, Germa–quite a mix! The recipes all came out delectable and were very simple to make.

Part of our Olympic dinner fun is that everyone cooks together. Plan on it taking twice as long to cook the meal than if you were on your own–that way there is no rush or frenzied last minute “oh, just let me do that!” I made sure all the ingredients were available, but each member of the family was in charge of a dish (sometimes working together). If there was a variation possibility, the person in charge made the decision. We chatted and chopped in the kitchen, tried new tastes, and enjoyed the Olympic show.

Even if you missed the opening ceremonies, the Olympics are still going on, and those athletes are eating Brazilian food. In solidarity with your own country, take a night to cook and watch the games with your family, Brazilian style. Click on each title to take you to the recipe:

Beef Kibbe: Yes, we did have meat, but I thought this looked more interesting than just “beef on a stick.” It’s a mix of bulgar and meat and spices. I can’t eat bulgar (gluten) so substituted with quinoa. We also didn’t feel like frying so baked them instead. Ok, so that’s a lot of tweaks to the recipe, but it was still really yummy! This is a good one for two people to work together–lots of chopping, rolling, and also making the dipping sauce.

Brazilian Greens: Again, we substituted for this one because we have so many greens that needed to be eaten from our garden. Instead of collards, we had kale and swiss chard. The red of the swiss chard added some nice color. This is the simplest and fastest of the recipes so a good one for a youngster to be in charge.

Brazilian Rice: Most of the recipes for Brazilian Rice don’t call for tomato, but I wanted to try this one anyway since it looked yummy–and it was! We substituted brown rice for white because I just can’t bring myself to buy white rice (health nut…).

Baked Sweet Plantains: Ohmygod these are so good right out of the oven! It is also so easy to make, you can put your youngest in charge. And it’s a great way to practice knife skills since it’s with a soft fruit. This is probably the only recipe we didn’t substitute a darn thing in since there are only two ingredients: plantains and oil. We will be adding this to our regular snack menu.

Brazilian Hot Chocolate: Do not skip, substitute, or cheap out on this recipe. Get the baking chocolate and slowly melt it. Wow. Wow. Wow, was this good! A perfect way to end our meal and stay awake till the very end of the ceremonies!