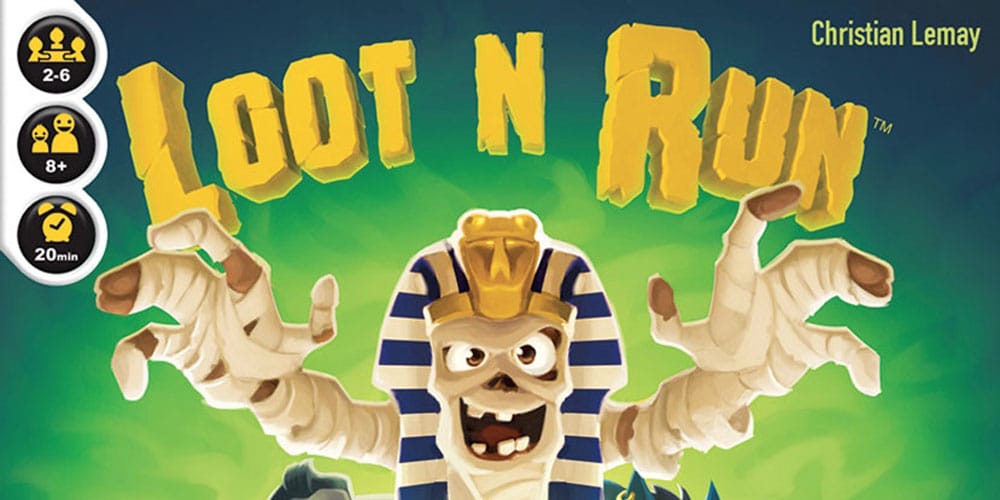 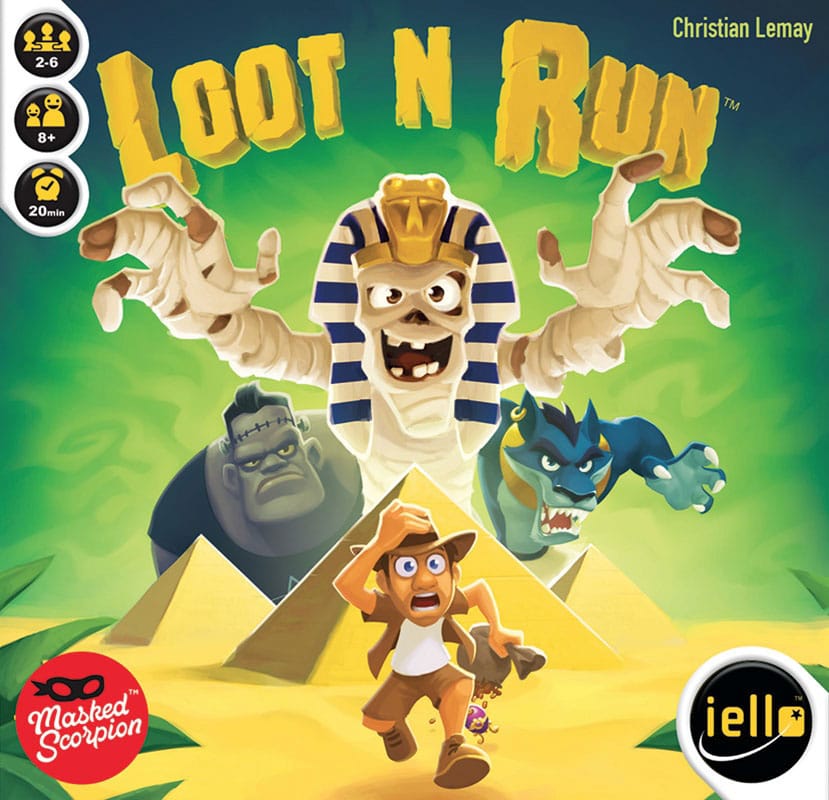 At a glance: Loot n Run is a game by Christian Lemay for 2 to 6 players, ages 8 and up, and takes about 20 minutes to play. It retails for $14.99 and is in stores now. The age rating seems about right; there’s nothing inappropriate for younger kids but the bluffing aspect may be trickier to grasp at first. (And I suppose if you’re uncomfortable with the idea of teaching your kids that pyramids are there to be looted, then this might not be the game for you.)

The component quality is good, as you would expect from Iello Games. The square cards can be a little unusual to shuffle, but not too difficult.

The game comes in a small box with a magnetic flap on the lid. The lid has a scoring track on it, and the scoring tokens are just little cardboard discs. There are two of each color–one goes on the scoring track, and one goes in front of the player so you can remember who’s who.

The scoring track is a little weird to me, because it maxes out at 35, which is also the number that triggers the end of the game (except in a 6-player game). It’s not clear to me if you can score higher than 35, or if 35 is the top limit, and everyone who reaches that number is tied.

The illustrations are cute, but pretty sparse. Most of the rooms just look like an empty room in the tomb, with 1 to 3 treasures on pedestals at the bottom of the card. A few of the cards have additional details like a scorpion or a broom in the corner–things that don’t have any game effect but are just there for decoration. The three guardians are fun: the mummy is wearing a wristwatch, the werewolf has an Egyptian outfit on, and Frank (a Frankenstein’s monster) has a Pink Floyd T-shirt on. These are definitely designed to be fun, not scary.

The goal of the game is to score the most points by collecting treasures.

To set up, give everyone 2 scoring tokens: one goes on the scoring track and the other is placed in front of the player as a reminder. Shuffle the cards and divide them into two equal decks. Pick a starting player, and play goes clockwise.

On your turn, you get one of the following actions: Loot, Run, or Awaken.

Loot: If you have no cards in front of you, you must Loot. Draw the top card from either deck. Look at it secretly and place it face-down in front of you.

Run: Reveal all of your cards and score points, ignoring guardians and amulets. You get one point per treasure. If you have two or more cards of the same color treasure, you double the points for that type of treasure. Then discard all of your cards.

Awaken: Reveal all of the cards in front of another player. Compare the number of guardians to the number of amulets–if there are at least as many amulets as guardians, the player scores points immediately as if they had picked the “Run” action. If there are more guardians than amulets, each type of guardian present activates once. Either way, the cards are discarded afterward.

The game ends when somebody reaches 35 points (or 30 points in a 6-player game). Everyone immediately reveals and scores their remaining cards. The highest score wins.

In a 2-player game, you may take the “Awaken” action even if you have no cards.

Loot n Run is a mix of press-your-luck and bluffing. It’s a pretty quick game and fairly light, but fun while it lasts. Each turn is pretty quick, because you only do one of the actions, and if you’re looting there’s just a choice of two cards.

The strategy comes in deciding which of the three actions to take. The more cards you get, the more likely you’ll have cards that match to double your score–but the more likely it is that you’ll have a guardian. At the same time, if you want the chance to prevent somebody else from scoring, you have to take the Awaken action–which means you won’t get to draw any cards or keep yourself safe from an awakening yourself.

What I’ve found is that even if you think an opponent is safe from guardians, you still don’t want them to accumulate too many cards. Sure, using Awaken means spending your precious single action to allow somebody else to score (if they’re safe), but it may prevent them from doubling up on treasures if you let them continue.

I like the fact that the cards have the green-yellow-red backs, because it gives you a relative probability but nothing definite. I’ve seen somebody get away with several red cards with no guardians, and somebody get caught by a guardian even though they only had green and yellow cards. If you happen to draw a few amulets early, you know you can keep going without getting caught. But if you start with some guardians, you have to decide if it’s worth the risk to draw some more cards, or if it’s better to just run and get yourself a few points and start over.

Overall, I found Loot n Run to be a clever little game. It’s not extremely deep but it does provide some fun choices for the players. It’s easy enough for kids and casual gamers, but interesting enough that more experienced gamers and adults can still enjoy it. I’ll mostly use this one as a filler at my game nights.

For more information, visit the Iello Games website, check for it at your local game store, or pick up a copy on Amazon.