This is the episode we’ve been building toward for three and a half seasons. Ollie’s lies and half truths come to a head. And, it costs him. Sure, he might have won this round (finally) against Darhk and HIVE, but he’s lost those he cares most about. Because he’s a habitual liar.

Darhk tells Ollie and Felicity that he has taken William. In order to release Ollie’s son, Darhk requires Ollie to not only drop out of the mayoral race, but throw his support behind Ruve. Ollie doesn’t think twice about it. He will do what Malcolm refused to do when confronted with a similar proposition. Ollie will give up position in order to protect his son.

Felicity is understandably shaken. She’s supposed to be marrying Ollie, but he can’t trust her enough to tell her that he has a son. It doesn’t get any better when the team is assembled and it comes out that Thea knew about William. So does Barry. And Malcolm.

Laurel’s pretty broken up over the information, too. Sure, there’s a lot of water under the bridge between her and Ollie since they dated. Ollie was dead. So was Laurel’s sister, Sara, with whom Ollie was cheating on Laurel. Then Ollie wasn’t dead. Then Sara wasn’t, either. Then Sara was, again. But now she’s not. Oh, and Ollie has a son by another woman he cheated with.

The team starts hunting down leads. Ollie’s search takes him to Detroit to recruit another magic user to help fight against Darhk’s magic. Vixen received her own introduction in an animated series on CW’s streaming service, CW Seed, which featured cameos and voice-over work by CW’s DC superhero regulars. If you’re interested, go check it out… but not until we’re finished here.

Thea calls on Malcolm, who is still sulking. Not about losing his hand, though that’s part of it. Malcolm is upset that he is no longer Ra’s al Ghul. Thea asks Malcolm if he told Darhk about William. Malcolm gives an “of course I did” no-answer. Funny how Malcolm went from suiting up as the Green Arrow earlier this season in order to spring Ollie from Darhk and is now one of Darhk’s right-hand men. Sorry, bad analogy, considering Malcolm’s current condition.

Which does raise one question. Malcolm loves to test people. To push them to and sometimes past their limits. The fact that he was the one who abducted William and handed the boy to Darhk reinforces that Malcolm is a bad guy. He wanted to level half of Starling City back in season one. However, Malcolm still hasn’t given Darhk a vital piece–or multiple pieces–of information. Malcolm knows that Ollie is the Green Arrow. Malcolm knows where the Arrow HQ is located and how to get inside without raising any alarms. So, what hasn’t Malcolm given that up to Darhk yet? Stealing William in order to force Ollie’s hand so that Ollie is willing to go further than he’s allowed himself to go so far since returning to Star City sounds like exactly the sort of thing that Malcolm can picture as being the correct thing to do. 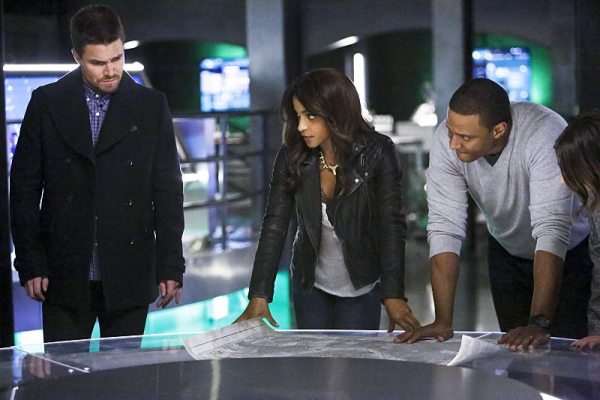 Vixen is able to track William, but that operation sours when Darhk is able to Force-choke both Ollie and Vixen and make his escape. In response to the attack, Darhk calls Ollie and ups the timetable for Ollie’s speech. Drop out of the race tonight. Which Ollie does. Again, no hesitation.

Darhk doesn’t release William right away. He lets Ollie dangle a while. During that time, the team is able to figure out that Darhk must be getting his power from some sort of talisman like Vixen uses and that it must be on a ley line in order to channel that power and feed it to Darhk. When Darhk does call and arrange a drop off, the team has to choose… take Darhk’s word for it and get William back (maybe) or attack and steal the idol when Darhk is least expecting it.

The team opts for the latter. Vixen steals the idol easily enough, but Darhk is still strong enough to Force-choke the entire team assembled in his driveway. Vixen goes to Plan B and shatters the idol. Game over. 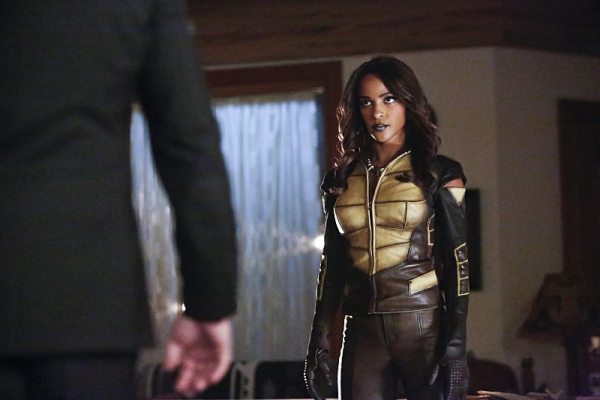 With William safe, Ollie must choose to either keep William close in order to keep him safe, as Dig suggests, or push William away so that he can have a normal childhood outside of Ollie’s orbit. Ollie chooses the latter and records a message for William, to be played after William turns 18, where Ollie explains why he had to let his son go.

Felicity wheels in. She’s heard enough. She tells Ollie that a marriage is about trust, and that she doesn’t think that Ollie knows how to trust. She understands that Ollie was forced to keep silent about William, but understanding doesn’t make it right. Nor does Ollie deciding to push William away without talking to Felicity at all about the decision. Felicity’s done with the lies, and for now at least, she’s done with the liar. That’s when Curtis’ spinal stimulator starts to work. With her first steps, Felicity gets out of her wheelchair and walks out the door without a word or a single look back.

Finally! Can we get past the “lying to protect” motivation that our heroes on these CW/DC Comics series have? I can understand (but, like Felicity, understanding doesn’t make it right) that Malcolm still thinks this way. He’s the villain. Most likely, the villain… the guy who puts someone that the team cares about in the ground near the end of this season, the guy who Ollie and Felicity realize has to be killed in order to be stopped.

It’s time for the good guys to stop acting this way. Barry and Cisco seem to have moved past this, as they couldn’t keep what they saw on Earth-2 from Joe, Iris, and Caitlin, even though they were told that doing so could be disastrous. Keeping the secret “for their protection” has proven to be more disastrous so far. Now that Ollie has lost his son, his fiancé, and what respect the rest of his team (both his campaign team and his team of heroes) has for him, maybe he’ll learn this lesson as well and I won’t have to type “Ollie is lying to protect someone he cares about” ever again.

A fella can dream! 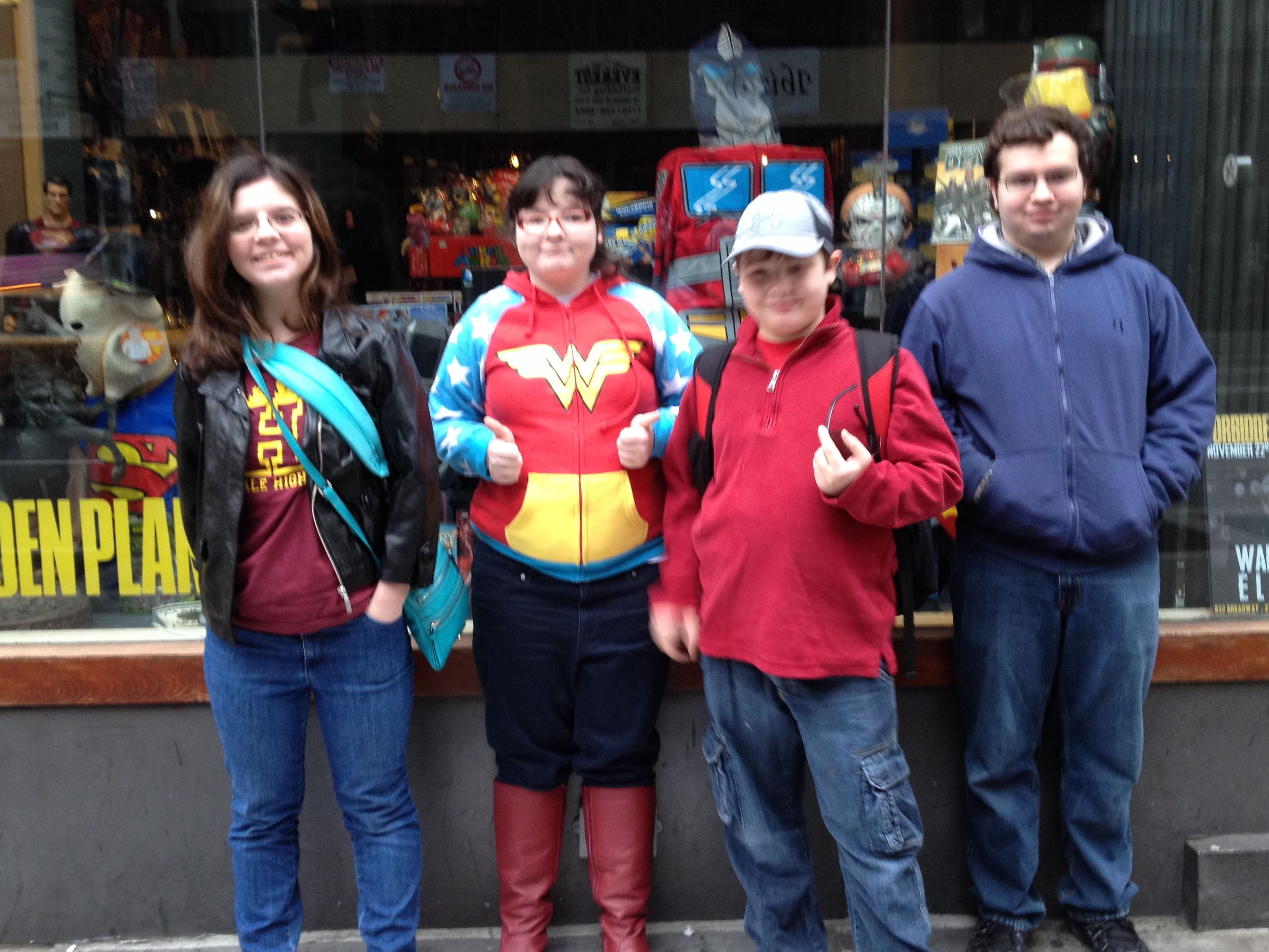