As with most GPS devices, the Garmin 50 mounts to your windshield with a suction cup. The camera attaches to the post of your head rest with a screw clamp, runs on two AA batteries,and is completely wireless. I really enjoy not having wires running from the camera to the device. It was becoming a problem with our wired camera as my son would kick the cables and eventually knock the camera down.

A quick installation sheet shows just how easy the installation is. It’s pretty standard if you’ve ever owned a navigation device for your car.

After the quick installation of the Garmin 50, I powered up the device and tapped the camera icon. Without doing anything myself, the camera had been recognized and synched. There are a couple of settings you can adjust–how long the camera will stay on when activated, whether or not you want the video flipped, and the alignment of the camera in the display. Have multiple children you need to keep an eye on? No problem! Up to three additional (four total) cameras can be purchased and synced with your Garmin 50.

The video quality in both day and night conditions was perfectly adequate to see what your child is doing and make communication with them so much simpler and safer. The camera icon is always on the navigation screen and with one tap activates the camera. Because it runs on batteries, the quick deactivation is quite nice so the camera is only running on full power for a few seconds at a time.

Thankfully, I’ve never had that moment of panic where I’ve forgotten my child in the car, but I’ve heard stories. No parent is perfect, and, especially when kids are very young and parents are very sleep deprived, a reminder to check for passengers with a shot from the camera could come in very handy!

I have to admit, I was skeptical about the usefulness of a navigation device in today’s age of Google maps and iPhones. I last owned a GPS device (and it was a Garmin) back before my first smart phone but quickly ditched it when the maps got out of date, and I could map things faster and easier on my phone. However, they seem to have come a long way since those days and offer a bunch of functionality my phone can’t beat.

There are quite a lot of tricky off ramps here in Washington and my first test run of the Garmin 50 included driving back from a part of Washington, I never visit. Google maps usually does an okay job of telling you which lane to be in, but I’ve frequently been caught with not enough time to maneuver in to exactly the right lane for a given road transition. I was amazed when my screen split, and I was given a rendering of what the actual off ramp looked like and which lanes I needed to be in. It seems so simple, yet its a very powerful tool that not only makes some tricky directions much simpler but also increases road safety dramatically.

The Garmin 50 also provides a ton of data about the trip you’re on (and historical trips as well). Estimated arrival time, distance to go, when your next turn is, max and average speeds, elevation, and direction are just a fraction of the data points available. If you’re a data geek like me, this is heaven. There is even a nice visual indicator of whether or not you are over the current speed limit. There are also a ton of milestones that can be enabled–restaurants, banks, gas stations–that will automatically show up on the map as you drive, but can also be popped out for more details while still providing you with a clear view of the map and where you are.

My favorite feature of the Garmin 50 that blows using a smart phone out of the water is the alert system. When approaching a school zone, a red light camera, a curve, or a speed limit decrease, the device gives you an alert pop-up in the top bar. After just a few uses I’ve found red light cameras and school zones I’d never been aware of on my regular routes! Although not getting a ticket is a great bonus, making sure I’m driving more safely, especially where there may be children present, is an even better reward.

The final thing that has really changed my perspective on navigation devices is that the Garmin 50 comes with lifetime map updates. The thought of always having updated maps without having to buy them really makes the purchase of a device like this a lot more realistic.

If you and your family spend a lot of time in the car and you want a great navigation and child monitoring device, the Garmin babyCam Bundle is a perfect choice.

Note: I received a unit to review but all thoughts and opinions above are my own.

Edit: It was previously stated that the batteries were included with the Bundle but this is not the case. 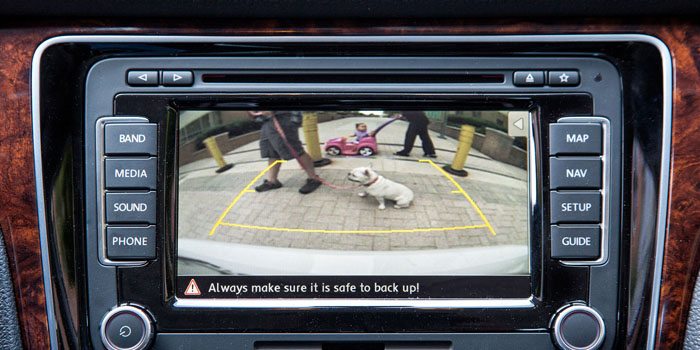