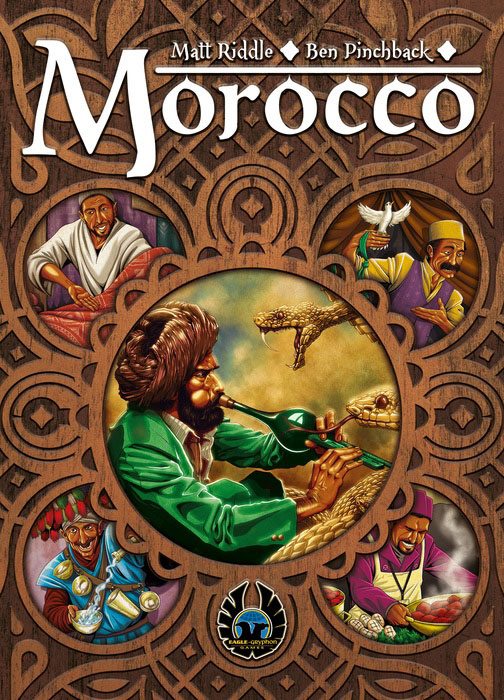 In the marketplace of Jemaa el-Fnaa, five families jostle and haggle to get the best stalls. It’s a crowded bazaar and juice sellers stand at each junction, hawking their wares. Make the most of the overflowing crowds to achieve victory in Morocco.

At a glance: Morocco is a game for 2 to 5 players, ages 12 and up, and takes about 45 minutes to play. It is currently seeking funding on Kickstarter, with a pledge level of $34 (plus shipping) for a copy of the game. It was designed by Matt Riddle and Ben Pinchback, and will be published by Eagle-Gryphon Games.

I was sent a prototype of Morocco for review, so the components in my set are not final quality and are subject to change. However, much of the artwork was already completed so I could get a sense of what the final game will look like. And I’ve generally been very pleased with the final quality of components in Eagle-Gryphon Games–they don’t skimp on components!

The colors on the information cubes looks like it will be black, tan, orange, green, and purple–better for color blind players than what was in the prototype, I imagine.

The Market tiles have illustrations of the five different families: Snake Charmers, Water Sellers, Rug Merchants, Magicians, and Food Sellers. (The families are equivalent in gameplay but have artwork and colors to distinguish them.) I did notice that all of the people pictured are men, so if you’re looking for more balanced gender representation you won’t find that here.

The board and tiles are all nicely illustrated, with spaces for the various tiles, tokens, and cubes all worked into the tiled patterns of the marketplace.

You can download a copy of the rules here, or watch a video tutorial.

The goal of the game is to score the most points by securing market stalls and clearing out the juice sellers.

Each round has two phases: Scout Stalls, and Assign Workers.

Scout Stalls: In turn order, each player moves the pawn on the roof to one of the five spaces. The active player takes two cubes from the supply matching the ones to either side of the pawn. All other players take a cube matching the one where the pawn was placed.

Spend information cubes to place your workers into the marketplace: you must spend two cubes that match the row and column of the stall where you wish to place your worker. (For instance, in the above picture, you would spend 1 orange and 1 brown to place a worker in the stall in the bottom right.) Each stall has four spaces, and you may place a worker in any unoccupied stall.

If you have special workers, you may place them instead. Bodyguards count as 2 workers for scoring. Tourists cost one additional cube (of any color) to place, but will be allowed to move once after scoring a stall. Cousins cost an additional cube and 1 cousin token, and allow you to place another assistant immediately in an adjacent space in a different stall.

During this phase, you may spend gold coins to swap two cubes in a market row or a market column, thus changing which cubes are required in order to place workers there.

Once all the spaces in a stall are filled (including overflow from closed stalls–see below), that stall is scored immediately. You count up the number of workers each player has in the stall: bodyguards count as 2, and everyone else counts as 1 each. Each player takes the juice seller tokens adjacent to their workers, if any.

The winner gets 5 points and gets to place one of their market tiles in that space. (Workers are removed and returned to players, except for bodyguards, who return to the guards’ quarters.) If there’s a tie for first, all tied players get 5 points and the active player puts an empty stall in that space.

The game ends at the end of a round when there are 5 or fewer open stalls in the market. If the last stall is closed, the game ends immediately after scoring that stall.

You get the point values of the juice seller tokens you collected, plus 1 VP per gold coin. Also, you get 3 VP per market tile for your largest contiguous group of market tiles on the board.

Highest score wins. Ties go to the player with the most market tiles placed.

Morocco is the latest game from Matt Riddle and Ben Pinchback, who have a growing list of games, including one of my favorites: Eggs & Empires. Most of their published games have been small-box games so far, but Morocco is a larger Euro-style game. However, the rulebook is surprisingly small (only 5 pages!) for what you might expect from looking at the components. I like the way that Morocco‘s fairly simple ruleset allows for depth of strategy. It’s a cool combination of area control and worker placement.

The gameplay is fairly straightforward and it’s pretty easy to grasp the basic mechanics. I like the way that the Scout Stalls phase (essentially a resource-collection step) gives you some control over what other players will receive. Since every player must move the pawn on their turn before collecting cubes, there are ways to prevent players from taking particular pairs of cubes. Or, you can make your selection based on what everyone else will get.

There are several different ways to get points, with some happening during the course of the game and some at the end. The primary scoring is by controlling a stall when it fills up: you want to watch for stalls that are close to full, and try to get your workers to them before they score. Although you get the most points for being in first place, it’s worth taking second place rather than letting a single player monopolize the stall because you still get gold coins or bodyguards (or both!). Those bodyguards and coins can make a huge difference, and just because you may help another player close out a stall doesn’t mean you should avoid a stall entirely.

Related to that are the juice vendors. These are worth 2 to 4 points each, but there can be up to 4 spaces adjacent to each juice vendor. So if you have a worker next to a high-value juice vendor, it’s in your best interest to get your stall closed before a nearby stall closes and that juice vendor goes into your opponent’s scoring pile.

Finally, there’s the end-game scoring based on your largest contiguous area. Since you get three points per tile but only in your largest group, you want to put all of your markets in the same area whenever possible. A lot of the wrangling in the game will come from trying to head off a player from expanding a large group. It may even be worth tying for first place and putting in an empty stall just to keep them from scoring 3 more points.

The overflow into adjacent stalls is a fun mechanic, too. If you play it right, you can set up chain reactions with the overflow and the tourists to score multiple stalls in a row. Spotting a potential change is only half the challenge, though: the other is acquiring the right cubes so you can take advantage of those spots.

Morocco has both direct and indirect competition. As with many area control games, much of it has to do with figuring out what spaces your opponents want and trying to get to them first. Of course, sometimes that comes at the cost of getting other spaces that you want, too. Even the resource collection provides an opportunity to hinder your opponents a little.

Overall, I’ve enjoyed playing the prototype of Morocco and can’t wait to see how the final version turns out. It’s a nice medium-weight strategy game that isn’t so complex that you can’t play with your casual gaming friends, but has enough depth that more experienced gamers can still enjoy it. Although the theme is evocative, it’s not always entirely clear how the mechanics are tied to the “story” of what’s happening in the game, but that didn’t bother me too much.

For more information or to back the project, visit the Morocco Kickstarter page. 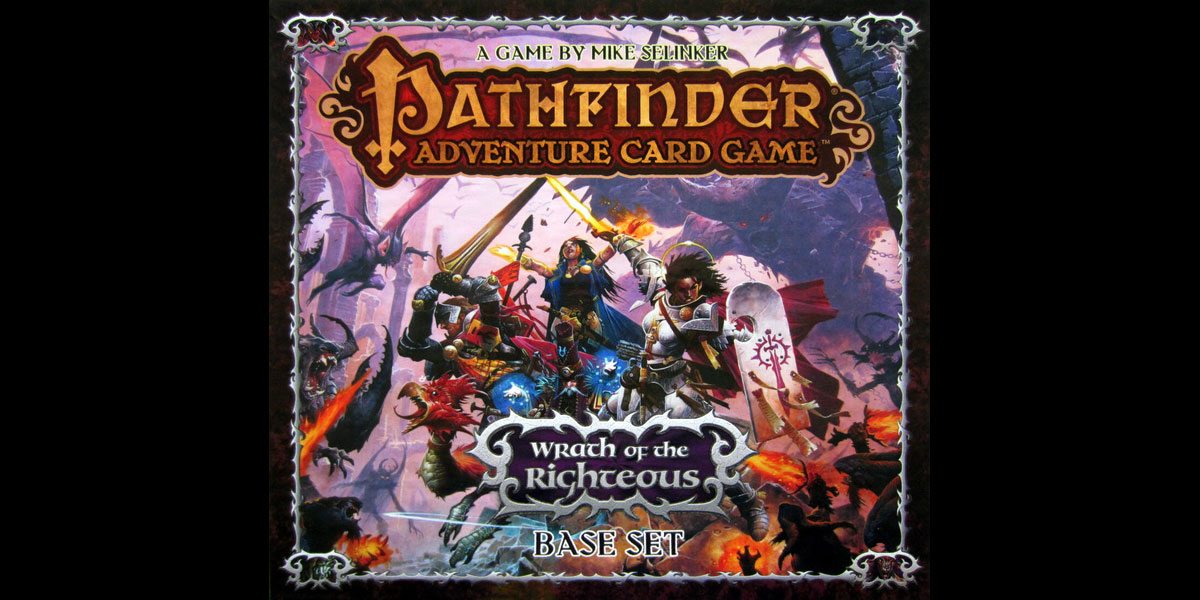 A Peek Inside 'Pathfinder Adventure Card Game: Wrath of the Righteous'

1 thought on “Kickstarter Tabletop Alert: Rule the Market in ‘Morocco’”