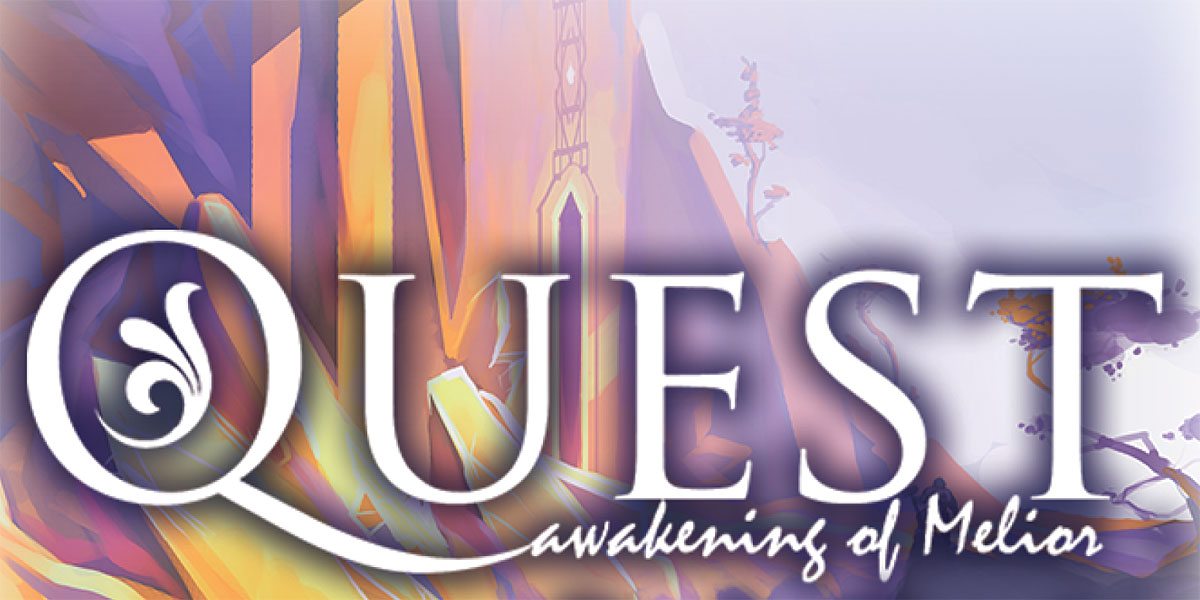 Quest: Awakening of Melior is a new game on Kickstarter that is a single-player expandable game of dice, cards, exploration, and questing. A beta version of the game is available as a print and play and on Tabletop Simulator right now. I used Tabletop Simulator to play the game, so all pictures and my experience are based on that version of the game.

The game contents aren’t overly complicated–106 cards, five six-sided dice, and a rules sheet. The cards are divided into four character cards, five character specific event cards, five event and 14 encounter cards specific to each of the three locations in the game, 20 generic events, and five XP token cards. The division of cards into locations and characters makes it possible for the game to easily expand in the future.

Game setup is fairly quick. You choose your character (I chose Zebra Amelior), shuffle her event cards into the events deck, deal out the first stage from the encounters deck, and set your starting counters–Stage to one, Level to one, and Hit Points to six.

While there is certainly some complexity to it, gameplay can be broken down into a few easy steps:

On my first turn I received a boon that allowed me to heal a HP each time I entered a Shadow Caves encounter, which helped me easily decide where I’d go on my next turn. I then squared off against Diamond Knights. Unfortunately I was unable to get my combo locked in before I had locked in three combos for the knights, and so I was thoroughly trounced. The Knights had four combat to my one, but we tied on Intellect. On a tie, it counts as a win, so the Knights went into my XP pile, but I still took one damage for the tie.

On my second turn, I received another permanent Boon. I then headed for the Shadow Caves to get my HP back up. When you move up the pyramid on each turn, you clear out the extra cards so that you always have an even pyramid shape. Any discarded encounter cards go back to the deck so you may need to fight them again.

The boon card I received was a pretty helpful one. It starts with three counters and, anytime you roll a six, you can lock it to this card instead of to a combo and earn another counter. Each counter can then be spent to regain HP between encounters.

I was extremely lucky in that my third event was a Quest card. Now with a quest on the table, I could focus in and move ahead with a clear direction other than just leveling up and going through encounters. There were two Glowmount encounters lined up in Stage 1 that I successfully vanquished. I headed in to Stage 2 with two counters on my Quest.

With my character at Level 2, full HP, and my Umiji Mote boon mostly full of counters, I confidently started my first encounter, knowing I’d head to the right this time to where I’d be able to at least pick up two more Glowmount encounters in this stage.

Apparently luck was very much with me during this game as my first Glowmount encounter was the Glowmount Prince who just happens to count as two encounters since he’s such a badass. Because I had the Taking Sides quest, he was a base three Intellect to my base three. Good enough for a tie as long as I could survive the first dice role. My luck held out, rolling no combos, and I took the tie to beat the encounter and advance my quest by two.

I leveled up once more, which allowed me to easily defeat the next Glowmount encounter and complete my quest. While I was happy to have won the game, I imagine most games do not go quite so quickly.

You may have noticed that I didn’t get into the nitty-gritty details about the game mechanics. There are great summations of the game play and gameplay videos available on the campaign page, so I didn’t want to re-hash all of that in detail.

What may have been obvious is that this is mostly a game of luck with the majority of what happens being based on dice rolling. There is definitely some press your luck and strategy to be had, though, especially as you learn what types of encounters may be behind specific locations as you decide where to go next on each turn. I think this would become more apparent if I’d made it to higher stages where things become more difficult (and more rewarding.)

If you don’t like luck-based games, this is probably not the game for you; however, the story and art (from what I’ve seen so far) are very well done, and there are a lot of mechanics that elevate this above a simple dice rolling game. I am usually a very strategy-heavy game player, and I really enjoyed playing Quest: Awakening of Melior and can’t wait to play the final game. Being a fairly compact card game that is easy to travel with will also make sure this is a solo game I take with me on trips alone.

Note: I was given a copy of Tabletop Simulator so I could play and review the game, but all thought and opinions above are my own.

One Man’s Experience With Kickstarter

The Drawer of Redundant Technology