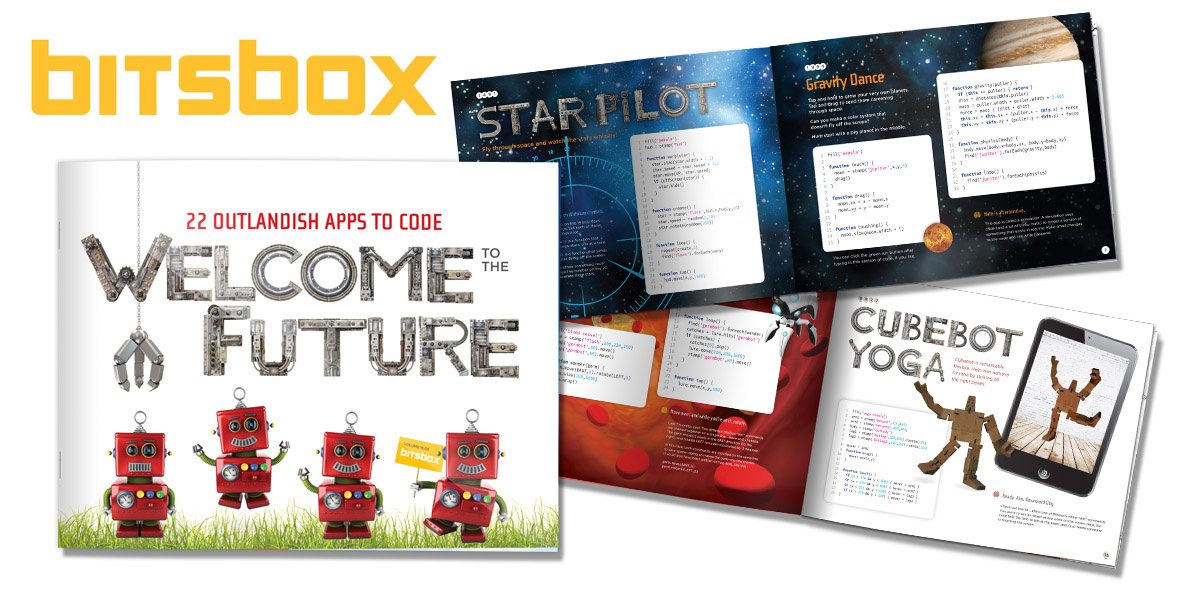 Back in December 2014, GeekDad reported on the Kickstarter for Bitsbox, a subscription service that sends a box of programming goodies to your doorstep every month. I was taken with the idea and backed the initial three-month subscription. Three weeks ago our first box arrived and I’m pleased to report that the Bitsbox team have put together a fun and instructive programming package.

As a refresher, Bitsbox has two components: the Bitsbox website, and the monthly box. The website is where kids program their apps, test them out in a virtual tablet, and can take a picture of the app’s QR code to run their creation on a real phone or tablet. The monthly box comes with a collection of goodies that help guide and motivate your child in learning to program. You can choose instead to purchase a monthly PDF if the rest of the box doesn’t interest you, but you’d be missing out on a lot of what makes Bitsbox special.

What’s in the Box?
Consistent with the description on the Bitsbox subscription page, my box arrived with stickers, trading challenge cards, temporary tattoos, a slinky (referred to as the “mystery toy” on the subscription page), a coupon for a friend to get started, and a booklet containing 22 apps to code. Remember in the school library when you had a book containing games you could program by typing them in yourself? The book is like that, but simpler and more engaging for younger minds.

I’m not sold on the mystery toy – the slinky did tie in with one of the apps from the book, but it was essentially treated like a separate component by my kids and quickly set aside. I could see how the mystery toy could raise excitement with some children though, making them look forward to the monthly delivery.

The most engaging part of the box with my kids, by far, was the pack of trading cards. The cards have a small app to build on one side, with cool art related to the app on the other. My kids took turns drafting cards from the pack, and they were the first things they wanted to try programming.

Coding on the Website
Bitsbox apps are written in Javascript, using a customized set of commands and behind-the-scenes magic to make it easy for kids to focus on the core behavior they want to create without having to deal with any boilerplate. The basics haven’t changed since James Floyd Kelly’s previous write-up, but there are some cool additions.

When you write an app from the book or a trading card, you start by entering the “App Number” that is written beside the program. This automatically creates an app with the right name and matching icon on the virtual tablet. You can create your own icon if you like, but this easy setup is a nice touch.

Before the first box shipped, the Bitsbox team also added an online guide to all the stamps, backgrounds, sounds, music, and commands that can be used. The list of images and sounds is almost essential for kids to help inspire them when they start modifying the apps from the book.

Our earlier article noted that the Bitsbox creators would rather “introduce this language as it appears in apps that kids are building,” and it is pretty clear that the command glossary is not the way kids are meant to learn to program with Bitsbox. However, having the reference there for parents is a huge resource when your child begins asking how they can accomplish more complicated actions.

My Kids and Bitsbox
So, how does the full package stand up to a real trial? My kids (2nd and 4th graders) have had a blast with it. I first set them up with the book, but they both quickly migrated to typing in their programming challenge cards. Even though those programs were often less involved than many in the book, they were highly drawn to the novelty of an app on a card, and they then started experimenting, changing the way their programs looked and behaved.

After a couple of days, my son presented me with a design for a game he wanted to program called Dessert Clicker. He had laid out the core of the game: a dessert appears on the screen and spins. If you tap it before three seconds are up, you score a point. Ten points and you win, three misses and you lose. I wasn’t certain we could make it in Bitsbox, but it turned not just to be possible, but easier than I thought, and you can see the code and try the game on the Bitsbox site. (Note: to see the code you’ll need to be at a desktop PC and widen your browser.)

Building the app with him was quite rewarding. I had to take my time, keep my hands off the keyboard, and work to guide him to solutions instead of just telling him how to do it. This required a bit of patience, but he was able to grasp most of the concepts (including arrays!) and even come up with some suggested ways of solving problems that hadn’t occurred to me. In those cases, the hardest part was reining in my desire to re-write the code how I would have written it and let him enjoy having solved the problem. As you might expect, he was quite proud to have written the game and show it off to the family.

There is one thing you definitely need to know: Bitsbox is not an activity that you can let your kids loose on without your involvement if you want them to get the full effect out of it. Yes, kids can program the included apps independently, but they will invariably run into problems that they can’t easily solve, such as syntax errors, or want to create programs that are outside of their ability level. But if you were interested in Bitsbox, you’re probably already the kind of parent who’s looking forward to sitting down with your children and sharing in the experience.

Staying Power
Like all new toys, my kids started strong with Bitsbox, but as time has passed, their enthusiasm has tapered. The first few nights they chose to program instead of playing Minecraft, but within a week it became something I had to motivate them to do. However, this is where I think the Bitsbox model really shines. They’ve both talked about the next delivery, and I have no doubt that its new content will spark another round of app building.

My only concern at this point is that the packages cater to all ages and ability levels. This means that my kids may outgrow portions of the programming challenges relatively soon. But given that you could re-word that sentence as: my only concern is that my kids will learn to program too quickly, it’s actually a testament to the friendly environment that the Bitsbox folks have created. Additionally, given the rapid pace of enhancements and receptiveness to feedback demonstrated by the team, it may be that Bitsbox grows with my kids. I’m excited to see it evolve, and we’re all looking forward to the next delivery.

Speaking of which, the second box ships on May 21. Scott Lininger, Bitsbox CEO, tells me that its theme is “Welcome to the Future” and it has a partnership with Orbotix where kids can build Bitsbox apps featuring Sphero. How cool is that? I’m also really excited about the new send and get commands, which will allow coders to create “real-time, multiplayer games.”

You can subscribe to Bitsbox at their site. And while I’m obviously enamored with it, if you’d like to see some feedback from other parents, kids, and educators, check out the Bitsbox Twitter feed. 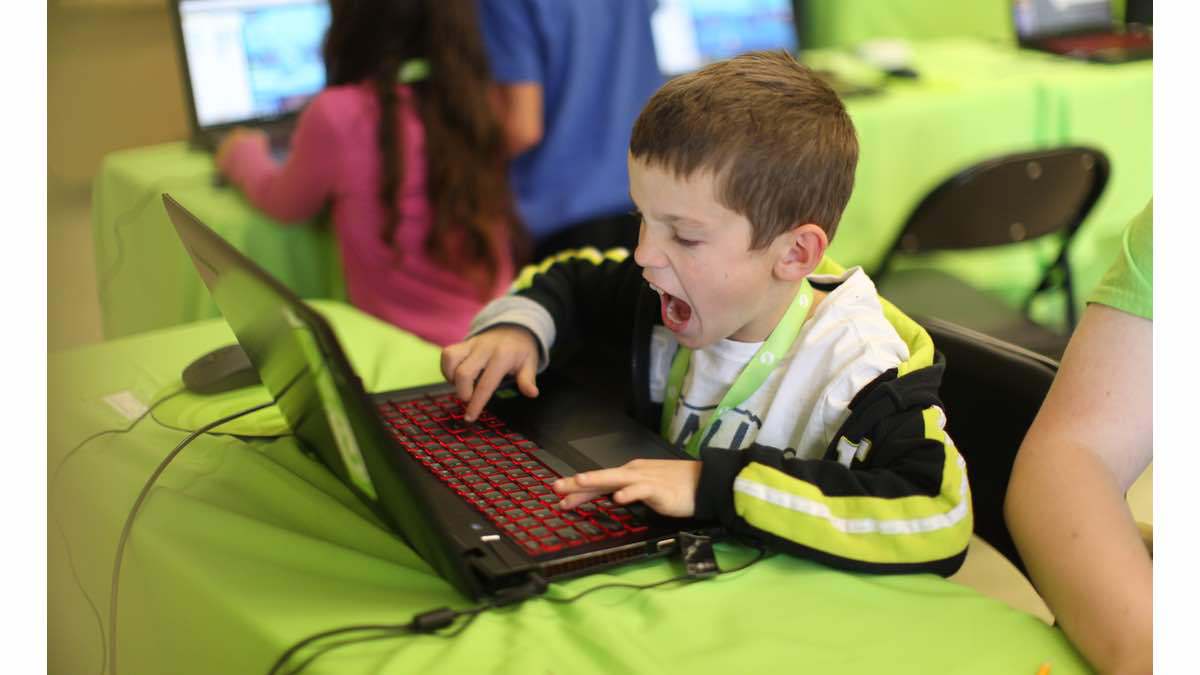 How to Connect Your Child with a Specific Coding Language

5 Reasons to Kickstart For The Win