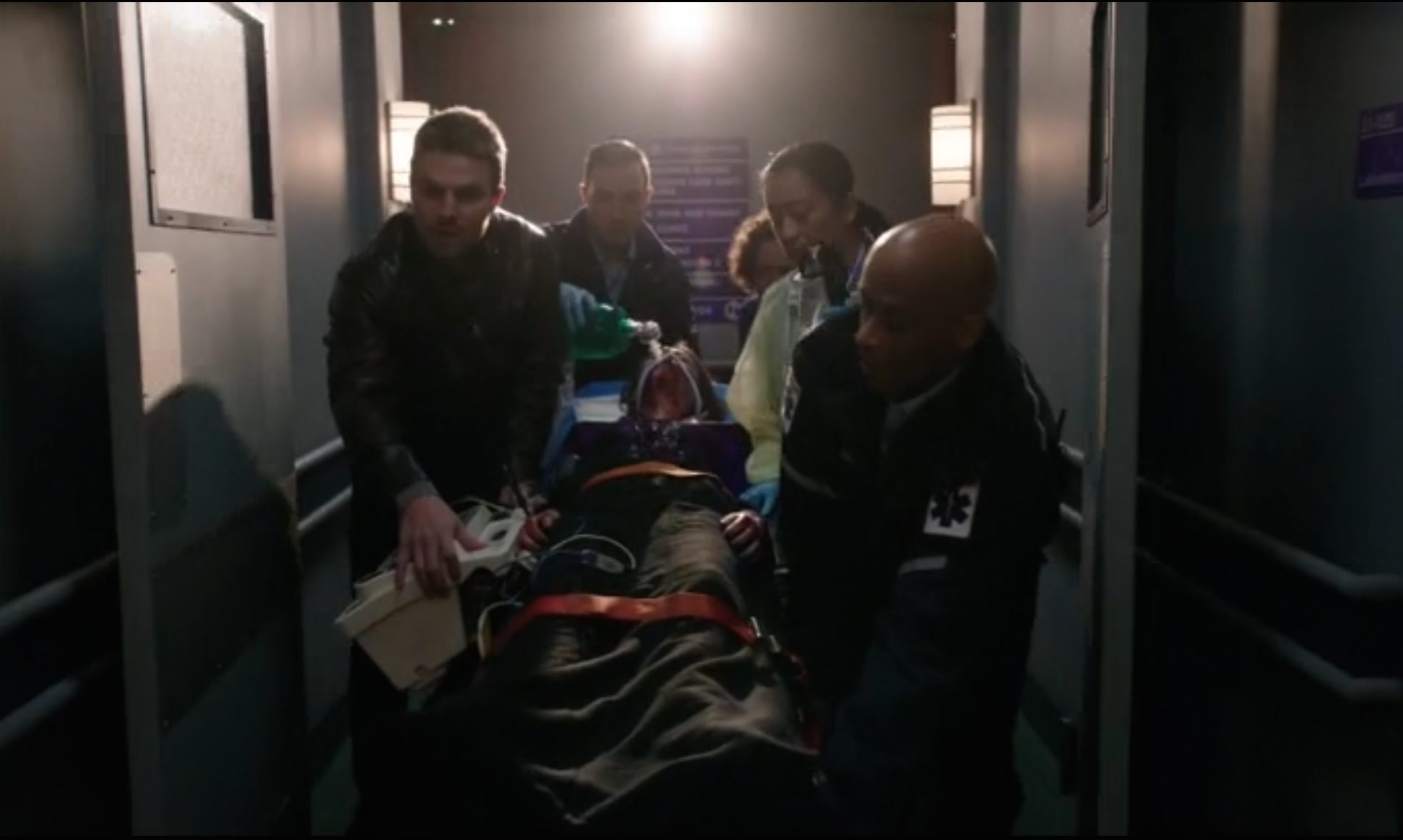 Mordechai:  We open with Thea bleeding on the floor, but moving. Turns out she’s only mostly dead. Oliver rushes her to the hospital, where she dies on the table, but is resuscitated. Barely. The doctor suggest Oliver “consider other options”–can doctors outright suggest that? As predicted last week, it’s all setup to tempt Oliver to take the title and use the Lazarus pit.

Corrina: We needed all those bloody images of Thea not so we would feel bad for Thea, no, we needed them to show Ollie’s pain and fear. It was a little much for me, especially after the graphic stabbing last episode.

Mordechai: The show doesn’t shy away from the simple fact that this is Oliver’s fault. Had he respected Thea’s choice to cut her biological father out of her life, and allowed the monster to pay for his crimes, Ra’s would not have taken an interest, and Thea would be safe. By now it is well established that Oliver is the King of Bad Choices. So, of course, he takes the offer. Which is a good choice, but a bad one.

Corrina: On Oliver and bad choices, I would toss the scriptwriters in here too.

Here’s where putting the Arrow and the Flash into the same universe along with supersceience becomes a problem. One, Ray has nanotech that already saved his life, two, STAR labs could possibly treat Thea, and, three, if Barry ever stops making bad choices about using his super-speed, he could disarm everyone in the League of Assassins in less than five minutes.

But let’s pretend Barry and STAR Labs are busy. This whole thing with Ra’s wanting Ollie to succeed him is silly. Oliver is clearly an idiot and shouldn’t be running anything and it makes Ra’s look stupid (and therefore less dangerous) for not just killing him.

Mordechai: Oh, and speaking of Merlyn, he shows up to cry at her side. How the heck does a mass murderer just walk into a hospital? Nice to see Oliver blaming Merlyn for it. Love the creepiness of this line though “I do love her, she’s the only child I have left”–possessiveness as love. Hooray.

Corrina: Why is Malcolm around again? He says he’s free at the end but, hello, there’s no statute of limitations on murder and it’s been established he destroyed the Glades. Why hasn’t someone tossed him to the Starling City judicial system.

Mordechai: Felicity insists on going with Oliver (notice how Diggle doesn’t have to? It’s just assumed) and borrows a jet from Ray, who breaks up with her gently, using the “you don’t love me because you’re in love with him” line that I find eye rolling. Still, they let Ray be classy about it, which was nice.

Corrina: Ray, you’re better off without this show. You’re too smart and grown-up.

Mordechai: On the plane, Oliver confesses to Felicity about killing Thea’s drug dealer, aka confessing more bad decisions made in the name of protecting Thea. It’s like a trend.

Corrina: You know where Ollie gave the speech earlier this scene about the city not being better because of him? He’s kinda right in that he doesn’t seem to have done any lasting good save for helping defuse at least one of the bombs that Malcolm planted.

At least Matthew Murdock exposed some corruption and helped the police, politicians, and newspapers clean up their act.

Mordechai: Nyssa is where, exactly? You’d think she’d at least be in the background.

Corrina: Sorry, the only women allowed on this episode are Ollie’s loved ones, not women who might have a plot connection. It was pointed out to me that Laurel should be at the hospital with Thea because she’s known Thea all her life and is somewhat a big sister to her. Felicity barely knows Thea but she’s there.

Again, service to the inferior romance plot at the expense of true characterization.

Mordechai: Diggle and and Maseao’s “heart to heart” was kinda great, though. You have to love a man who’s willing to lecture an assassin (and as Corrina predicted, Maseo’s motivation is his dead son). But you have to love Felicity for loosing her cool on Ra’s even more.

Corrina: Told you the kid would be dead. How a show can be so silly at times (one-day murder trial) and then go over the top with dead women and kids, I don’t know.

Mordechai: No, “over the top” is Ra’s as relationship counselor. Weeeeird.

Corrina: I have lost all respect for this version of Ra’s. My headcanon is that the actual Ra’s Al Ghul is behind all this, watching, and having fun watching Ollie the pretend Batman and his fake self have at each other. Nyssa knows the truth, which is why she’s staying away to avoid participation in this farce.

That’s my headcanon and I’m sticking to it.

Mordechai: But hey, the pit worked. Sure, Thea comes out crazy, but that is consistent with the lore of the Lazarus pit in the comics.

Corrina: Thea must have had fun with this scene. I smiled, at least.

Mordechai: The rest isn’t. Thea loses her memories, still thinks Ollie is dead and her other is alive, but recognizes Malcolm Merlyn as her father? How does that work, ‘zactly? Still, we see her come back to herself once they get to Starling City. Thank goodness. I don’t think I could handle a regressed Thea.

Corrina: I’ve no idea why she thought Ollie was dead but Malcolm was her father. Maybe she only regressed to when Ollie went off the cliff? But those dangerous side effects of the Pit seem to have vanished quickly.

By the way, no one even considered whether *Thea* would want this treatment. Sure, they’d have dunked her anyway but it would’ve been nice if someone said “hey, would Thea want this?”

On to the big “so, that happened,” scene. I imagine Olicity shippers were somewhat happy here, but, since I’m not on board that train, I just admired Stephen Amell shirtless. I also notice Emily Rickards has some nice muscle definition in her back.

Mordechai: There’s nothing sexier than taking someone’s glasses off before you kiss them. Yeah baby, here comes the blurry face of luuuurve.

This is a family blog, so we won’t use the term fans have given the bit of Oliver that seems to be a death sentence for every woman who touches it. That or they become evil. Does drugging Ollie count?

Corrina: Remember last week when I said Team Arrow was smart? Not so much this week as having to carry around an unconscious Ollie is a lousy start to an escape plan.

Mordechai: Nice to see Maseo helping the gang escape. Of course, then Ollie comes back up and makes… a bad decision. SHOCK! So we end with everyone saying goodbye and Oliver taking on the role of heir to the demon.

Corrina: During the big fight, I wondered if someone would pull a gun, a la Indiana Jones, and, good for Diggle, who was just like “hey, I brought a gun to a swordfight, dudes.”

Mordechai: And hooray for Felicity actually getting a shot in.

Corrina: I guess Ollie thought they’d all die right there, so he made his decision. In the heat of the moment, facing death, it makes some sense. By the way, why does Ollie have to keep his word to this guy? Why can’t he just kill him and as many of the other League members as possible before going down?

And now… we should mention the flashbacks, right?

Mordechai: Flashbacks. Ugh. Seeing Oliver take out trained soldiers is annoying. Nice to see Katana in action, though. She moves so fast that I can’t get a screenshot. I really wish the whole “best buddy” role had been hers.

Corrina: I laughed when Ollie showed up with a car and Maseo and Tatsu are like “you steal cars?” because how did they get where they were already without a car? That made no sense. And, of course, because it’s Ollie’s plan, they follow the wrong truck, then start a gunfight in a crowded market and ultimately fail.

Waller should have called in better back-up.

Next week, Ra’s once again threatens to kill Diggle. Must be Tuesday. 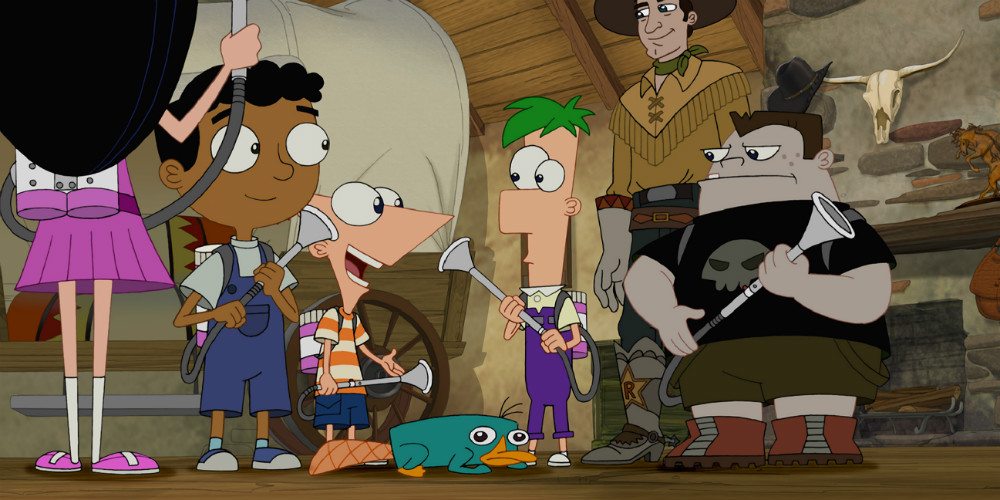