You can read the DM Report for Session 4 if you need to catch up–last night’s session began with the adventurers taking a short rest (a much needed rest for some healing) after last week’s actions. Ready and available for action tonight were:

Where’s is Krieger, Deep Gnome Barbarian and Professional Damage-and-Trap-Magnet? Well, his player was absent this week (Missed you, Greg!) so the remaining adventurers rolled with it. Given how much damage Krieger took last week, I determined that he had a bad head wound and needed some serious rest in part of the explored cave that was now rendered safe for habitation. Or at least sleep. He’s in there snoozing right now, hopefully to make a speedy recovery next week and return to action. 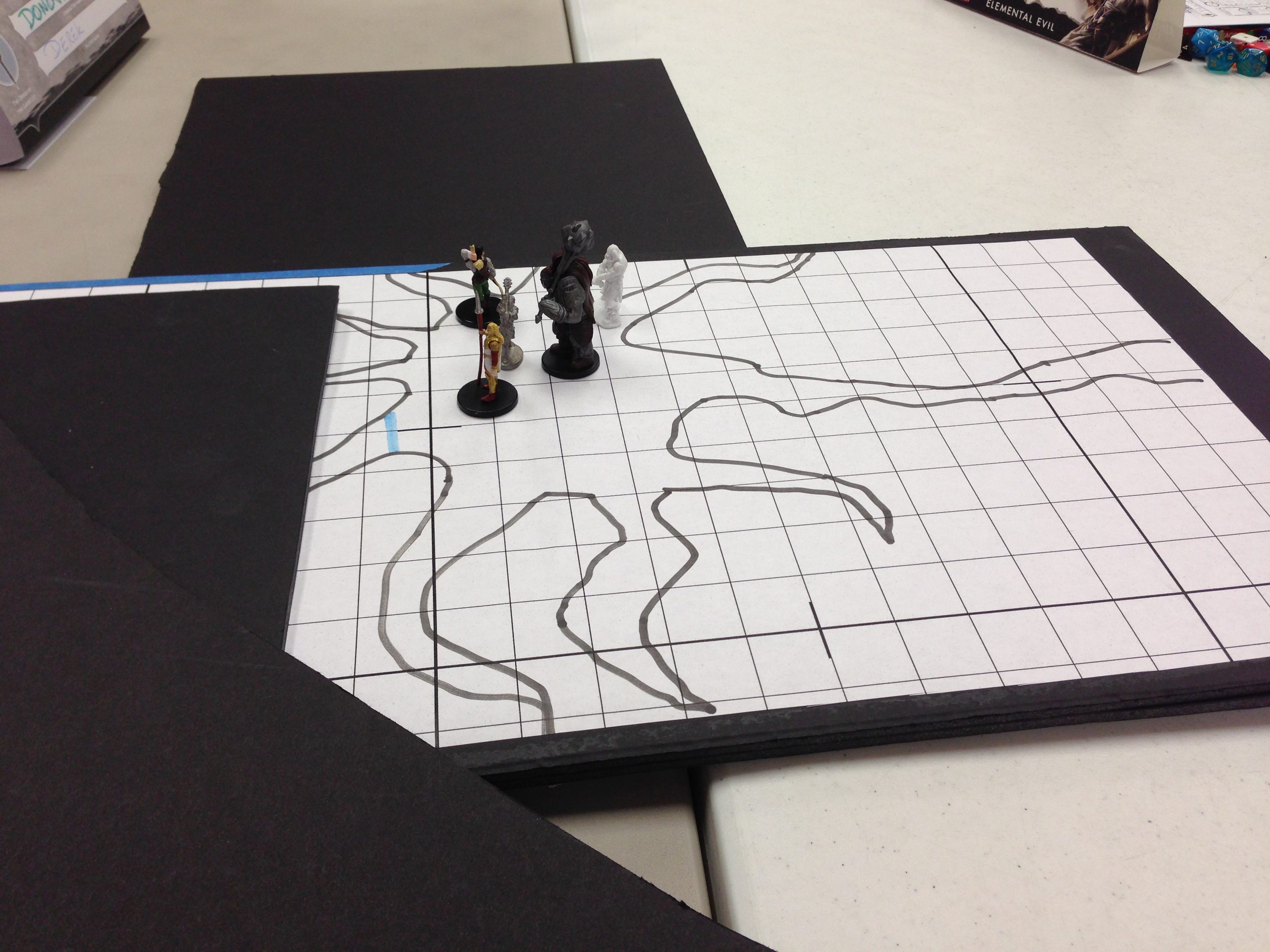 Meanwhile, the rest of the players returned to a known area of the cave to begin further investigations. The cleric was out of spells, and many in the party were not fully healed. There was some nervousness about what to do, but given the collapse near the entrance (a Perception check allowed them to determine the collapse was intentional), they could only move deeper into the unexplored areas. One at a time, they moved down the only real option available to them–a very narrow tunnel that opened up into a larger cavern with a star-pattern of fractures in all direction. But the fractures weren’t what grabbed their attention–as they neared the cavern, those in front could hear music. When they finally entered the cavern, the source of the music was a small gold music box on the ground… surrounded by three dancing figures in very strange clothing. The dancers took no notice of the players, but upon closer inspection the adventurers determined the dancers were animated dead. Attack or leave alone? They chose to leave them alone… at first. But as the adventurers continued to enter the cavern one by one, space became an issue and they noticed the dancers would move in not-so-random ways.

Stormwind (a bard) matched the tune with his guitar… no response. But when he played a completely different song and interrupted the music box, that’s when things got interesting. Three zombies attacked… four if you count the one that was hiding in a fracture and jumped out to grapple Stormwind from behind.

The team took a little damage, but managed to defeat the four zombies. When these zombies went down… they stayed down. (I failed my zombie saves–rolled in clear view.) Donovan (cleric) examined the music box and was able to determine it was definitely magical in nature and was designed to animate corpses that would only attack when the music stopped (or was interrupted… by a bard playing Whitney Houston’s “I Wanna Dance With Somebody”).

After the combat, three fractures were determined to move deeper into the cave while the others were all dead ends. One passage in particular interested the party, but they could NOT physically make their way more than twenty or thirty feet into the fracture before falling asleep. Stormwind was smart, and had a rope tied around his waste so the others could pull him back. He woke up easy enough, but related that as he moved deeper he got more tired. Not a magical sleep… but from exhaustion. They chose to ignore that fracture. 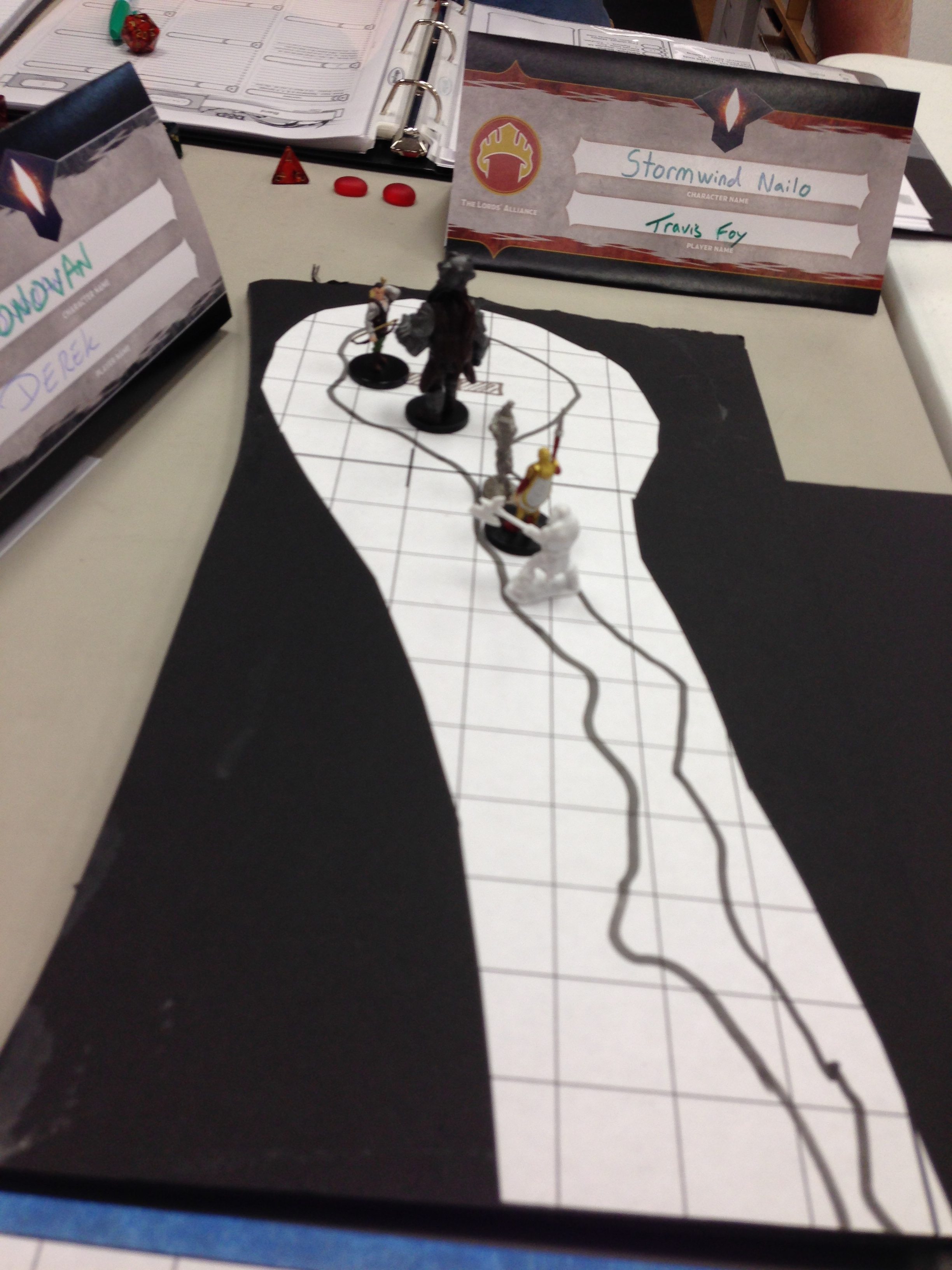 During combat, a moan could be heard from one of the two other fractures that were very near one another. Which one to take? They chose poorly. Poor Stormwind took the lead down the left path… 80 feet down and he spotted two simple chests in the center of a very small circular cavern. The group decided to stay back as Stormwind opened one of the chests. (After examining and finding no traps. He hoped.) As the first lid opened, a loud cackle could be heard and a taunt… the sound of a lever being pulled was heard and then a rain of large stones fell from the ceiling. Stormwind failed his Dexterity save. He had 7 hit points. The rules called for 2d6. I gave Stormwind the option to roll the dice or let me do it for him. He rolled a six on the first die. You can probably guess how this ends. The second die was a 1. He fell to 0 HP and collapsed.

While Thord (goliath) was digging him out from the rocks, the rest of the players moved in the direction of the previous cavern… in case someone was coming up on their six. No worries… the cavern was clear. And the cleric cast a Spare the Dying… stabilizing Stormwind until they could figure out how to heal him. 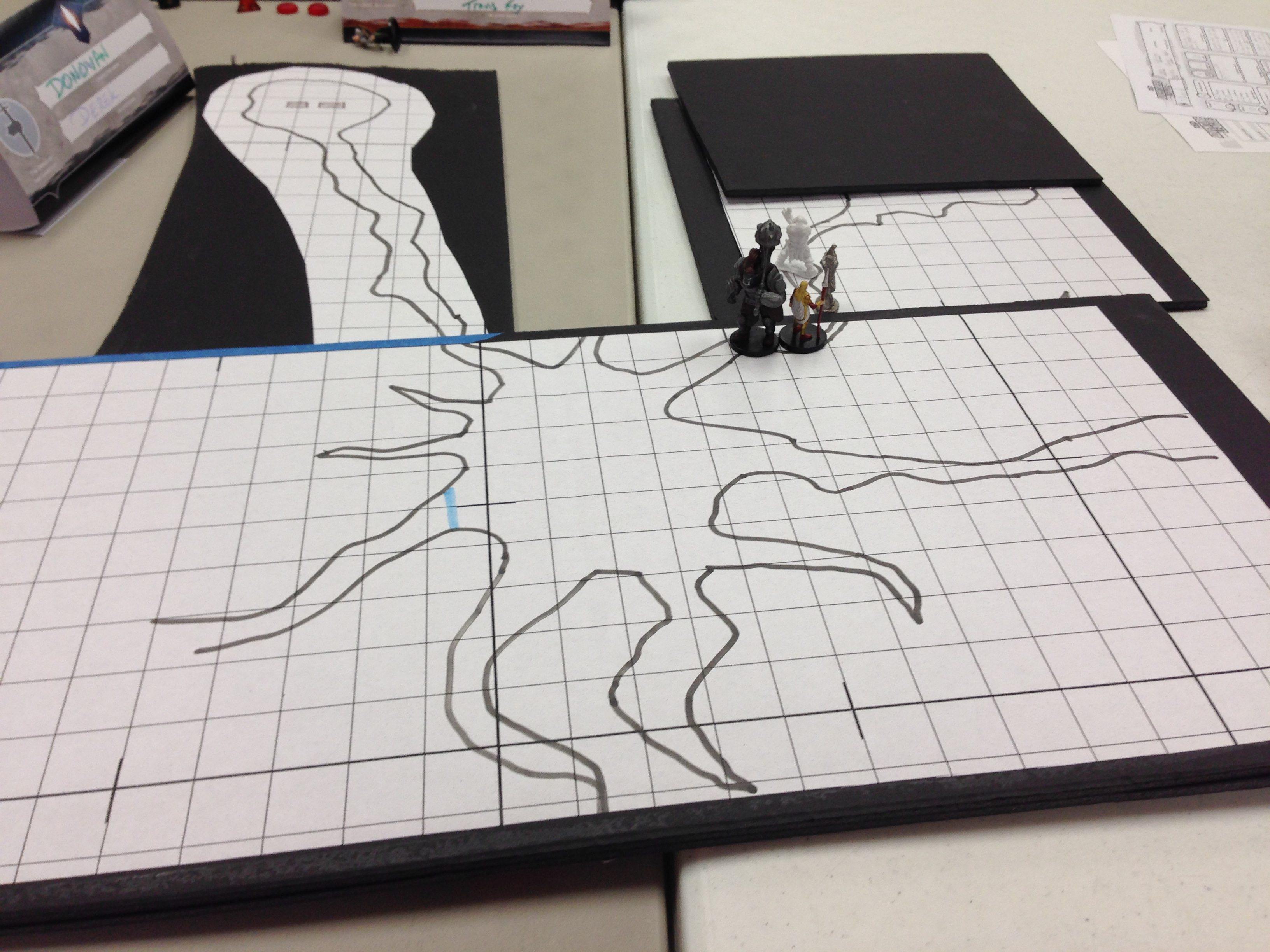 That left the right-side fracture. Tom led the way… the tunnel moved forward and then turned and Tom could hear a deep voice followed by a chittering-sound. A goliath isn’t exactly quiet, so a voice was heard “Who dat?”

During some intense negotiations that involved a lot of “Shudup… let me do duh talkin'” and “You have red stone?” (Tom had found a large red ruby in the ribcage of a skeleton last week… and a nice firebolt launched at his face.) Tom was able to determine by sneaking forward that he was negotiating with a half-ogre and a goblin who had the constable tied up and gagged in the corner of another small cavern. The half-ogre was only interested in the gem and was wiling to make a trade. The negotiations fooled the half-ogre into thinking the adventurers were “working” for the “master.” Whoever that might be… 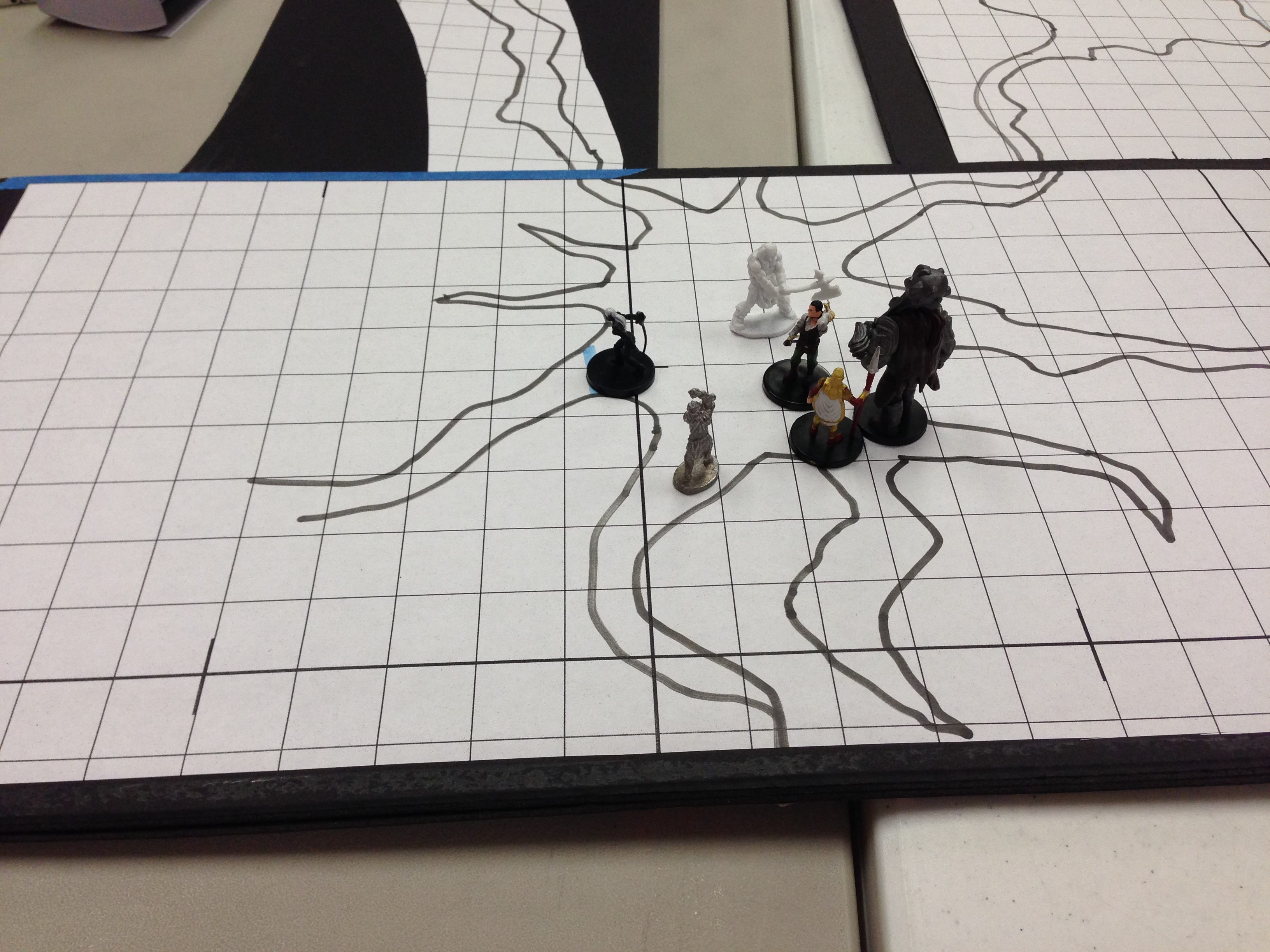 The half-ogre and goblin cautiously left the cave while Tom and crew watched. They freed the constable who was in decent shape and just so happened to have a single-dose of Healing Bandages that was able to get Stormwind awake and breathing again. As the party took another short rest, they explained to the constable about the strange fracture that caused Stormwind to collapse. The constable had heard rumors of some of the caves having strange properties that could cause drowsiness and asked the cleric if he had any method of entering a trance or meditation. A successful roll by Donovan answered that question… the constable suggested that if the cleric entered a trance, he could move down the fracture and not be subject to the strange effect. He could even pull (by rope) someone attached to him… as long as he didn’t break the trance, things should be okay. The constable told the cleric to be on the lookout for two or more strange stones that would have fallen (or been placed) anywhere in the fracture or near the end. Kick them away from each other and the effect should dissipate. Hmmm…. sounds reasonable.

And that’s where Session 5 ended. While there was some combat tonight, I wanted to give the players a break from that and give them some role playing time along with some problem solving… my hope is that they enjoyed some of the puzzles this night gave them. (Oh, and they completely avoided the combat with the half-ogre and goblin which WOULD have gone BADLY for them… no doubt about it.)

Next week… Session 6, and we’ll see if the cleric can maintain that trance/meditative state as he moves deeper into the cave. Should be interesting. Stay tuned. 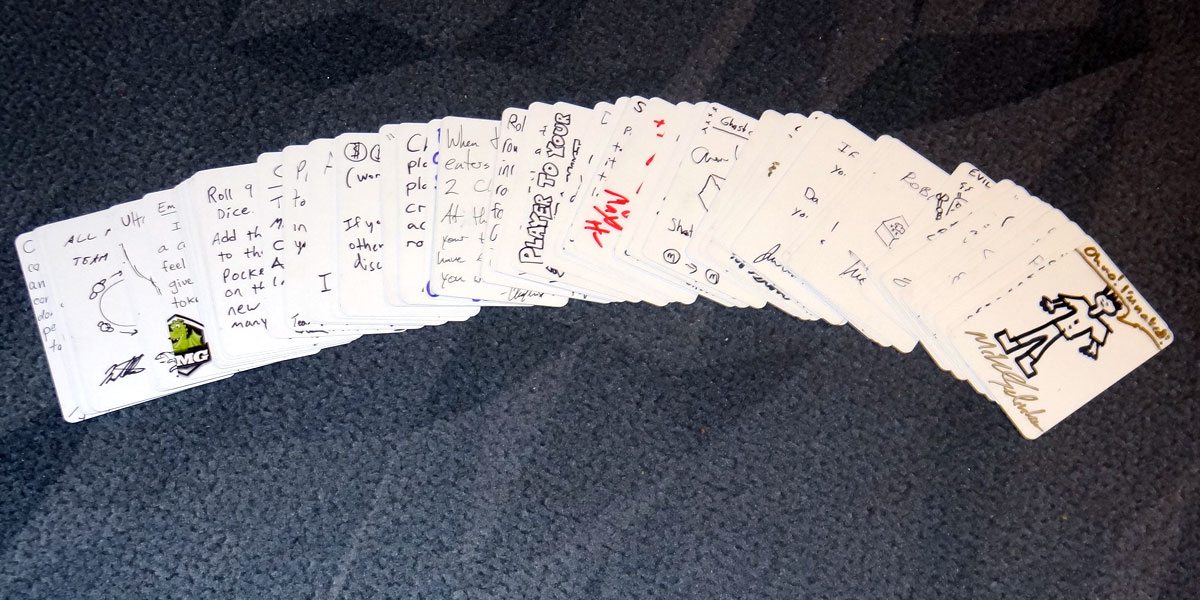 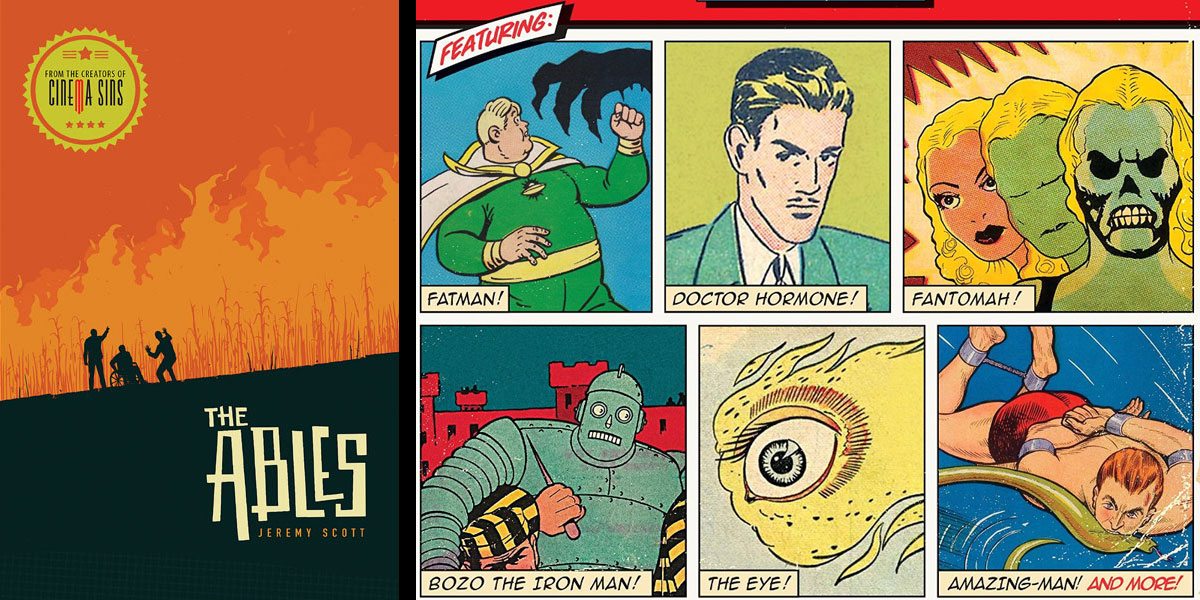