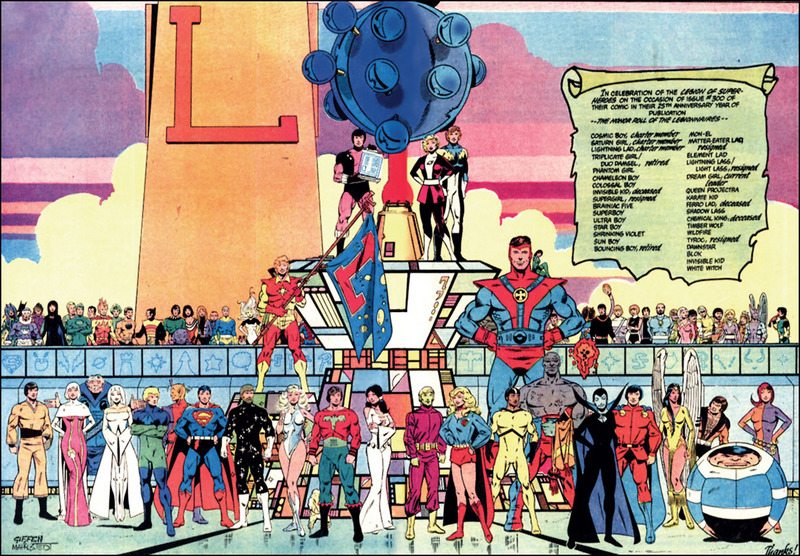 If you walk into your local comic shop or peruse Comixology.com this week, you may stumble across DC titles and be hopelessly confused.

The fictional reason, as detailed in this week’s Convergence #1,  is that a multi-universe Brainiac has kidnapped multiple realities and placed them under universe-spanning domes while deciding which realities will survive. This leads into the batch of titles coming out this month with each title exploring one of these multiple realities and tagged with “Convergence: Title.”

The best part for long-time readers?

Many beloved characters and plot lines lost in the last DC Universe reboot/reordering are back, including Renee Montoya’s Question identity, Lois and Clark’s marriage, Barbara Gordon’s Oracle, and Cassandra Cain’s Batgirl. The not-so-great part is that most of these are one-and-done stories.

This is the kind of reordering that’s increasingly driving me away from monthly comics, as I detailed in The Cliffs of Insanity: Should Monthly Comics Die?

The real-world reason? DC Comics has packed up its offices in New York City and headed west, to California. The fill-ins will cover the period it takes for everyone to make the move.

But, with a nod to Renee Montoya, the real question isn’t why DC is reordering its universe, it’s “should I read these stories?”

Alas, the best answer I can give is:

Because while my inner fangirl is squeeing at seeing Lois & Clark together again instead of the weird mess created by DC’s decision that Lois doesn’t matter to the Superman mythos, the other part of me is saying “oh, this Lois & Clark reunion will end badly because DC never lets anything end well lately.”  DC has been very clear that these stories take place “outside of time and space” meaning that they’re self-contained and likely will have no follow-up.

That’s cool if they end on a complete story. I’m completely down for the return of Cassandra Cain as Batgirl and I love some of the creative teams brought back for Convergence. But this could all be just a tease, stories could end on cliffhangers, and then fade to black with no resolution.

If I sound cynical, well, it’s because that’s how DC U ended their last universe: by canceling stories mid-way through, contradicting others, and then rebooting with the new 52 and saying “hey, forget all that, read this!” Now they’re saying “hey, remember the new 52? Forget all that for a while and read this!”

In the end, a good story is a good story and it doesn’t matter if DC decides that it didn’t happen in continuity.

Lois and Clark remain my OTP (one true pairing) and nothing that DC publishers is going to change that, not in my mind and especially not in the public mind, which has two television series and numerous movies that cement Lois Lane in the collective unconscious as the hard-driving reporter who wins Superman’s heart. (My fondest hope is that Convergence puts a stake through the heart of the Superman/Wonder Woman romance, which does neither character any good whatsoever.)

What does matter is if the Convergence stories all turn out to be one big tease with no real endings.

If that happens, there won’t even be good stories to read, just another big “they pulled me back in!” on the part of DC Comics to entice readers to, yet again, get used to another universe and another reiteration of their characters.

What does that lead to?

I can only point to my experience with Legion of Super-Heroes. Once upon a time, the adventures of the heroes of the 31st Century DC Universe was a favorite, with a sprawling cast of characters and an entire universe for setting. Then it was rebooted. And rebooted again. And rebooted once more. And again. And yet again.

When I tried to read the latest Legion reboot, I had to think “wait, is this the reality where Karate Kid is alive or dead? Is Timber Wolf with Light Lass and, if he is, is she Light Lass or Lightning Lass this time? Is Lourna Triplicate Girl or Duo Damsel? And, what the heck is the reason for the Legion being formed this time?” Not to mention, most importantly, “What costume is Cosmic Boy wearing this time?”

With all these questions running around in my head, it became increasingly difficult to immerse myself in any Legion story.

Pick a universe, DC. Stick with it for more than a few years.

Else I’ll have no choice but to retreat to re-reading my classic favorites or, even worse, giving up your comics altogether and reading something less complicated, like, say, George R.R. Martin’s A Song of Ice and Fire.

The Legend of Wonder Woman: The Story We Need

GeekMom And GeekDad PAX East Panel To Be Live Streamed!

2 thoughts on “What the Eff Is Up With DC Comics?”