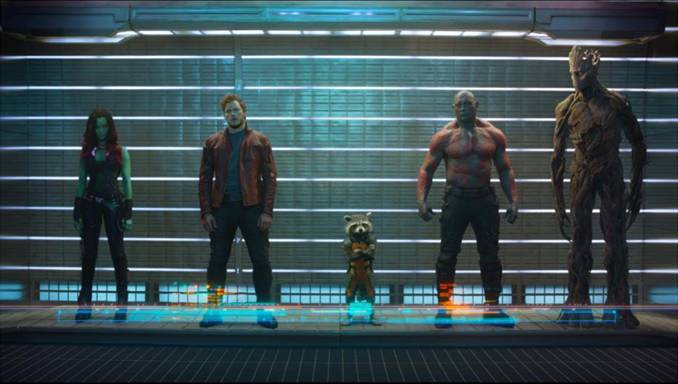 If there’s one thing director James Gunn got right when making Guardians of the Galaxy (and he actually got a lot right), it was the casting. From top to bottom, the assembled group of talent on screen is truly impressive. I mean, we’re talking big names like Glenn Close and John C. Reilly in supporting roles with very little screen time (they make it count, naturally). As for the main cast, the film relies on each of them to bring a range of complex, sometimes even contradictory, qualities to their characters. They all have the capacity to be both noble and roguish, tough and vulnerable, deathly serious and lighthearted. Part of the fun of the film is watching the titular team come together as a group.

A couple weeks ago I got to watch many of those actors come together in real life at a press conference to promote the film. In attendance at the event were stars Chris Pratt, Michael Rooker, Zoe Saldana, Vin Diesel, Dave Bautista, Benicio del Toro, and director James Gunn. According to Gunn, it was the first time they’d been assembled in one place (Diesel provided the voice of Groot but didn’t play the character on screen and del Toro’s role is basically an extended cameo).

Pratt grounds the film as Peter Quill, aka Star-Lord, an ordinary human who was abducted from Earth as a child and raised by Yondu (Rooker), the leader of a group of intergalactic outlaws known as Ravagers. When Peter steals a mysterious orb he becomes the target of multiple pursuers, including bounty hunters Rocket Raccoon (voiced by Bradley Cooper) and Groot (Diesel), as well as a trained assassin named Gamora (Saldana). They all eventually cross paths with Drax the Destroyer (Bautista), a convict seeking to avenge the deaths of his wife and child, and must put their differences aside to face an even greater threat that could mean the destruction of the entire galaxy.

“I’m like so emotional right now,” Gunn said as the press conference began. “Because I’ve missed these guys so much. I luckily got to spend some time with Zoe and Dave last week, but everybody else I haven’t been around and it’s just an amazing moment for us, I think.”

Gunn wasn’t just passionate about his cast, he animatedly talked about the origins of the project and what it meant to him to bring these characters to life on screen. When asked about taking on a lesser-known property from the Marvel universe, he said that it was “liberating.”

“I think I would have had a harder time trying to fit into the regular Marvel scheme of things,” he said. “This gave me a chance to take what I loved about Marvel movies and Marvel comics and create a whole new universe, which really has been the most exciting thing in my entire professional career.”

For Pratt, it was also a big step. Until last year he was probably best known as lovable doofus Andy in Parks and Recreation. Then, he lent his voice to the lead role in the blockbuster film The Lego Movie, followed by this starring role in Guardians of Galaxy. He’ll next be seen on the big screen running from dinosaurs in next year’s Jurassic World. Despite all the increased attention, Pratt taking this new career direction in stride.

“I’d been sort of having an identity crisis as an actor,” he said. “I didn’t know what I was, if I was a action guy or a comedy guy. And I thought maybe I could do a combination of both, but there’s nothing out there that’s like it. [I thought] maybe I have to develop something, And my manager just kept saying, ‘Guardians of the Galaxy, man.’ I said, ‘All right, maybe you’re right. Let’s go meet on it.’ And then James said, ‘I just want somebody to do their thing.’ And part of me thought, ‘Okay, well then I’ll just do my thing and if it’s not right, that’s okay.’ But I had an idea what that thing was and it was the thing that I got to do in this movie.”

Each of the actors in turn got a chance to talk about what their role in the film meant to them and what attracted them to it. Though Saldana was cast late in the process and arrived last on set, she said had a very specific view of how to portray Gamora when she arrived.

“I just didn’t want Gamora to look like any typical action person that’s just like very martial artsy and just does that Underworld jump and lands and the ground breaks and shit,” she said. “I wanted her to be a little more graceful and sleek, very classy in the way that she fights.”

The inspiration hit her, she said, as she was watching some footage of a Spanish bullfighter in action: “I’ve never seen somebody move so smoothly. It was just such a seductive dance. And I thought, ‘Well, that’s Gamora.’ She’s a woman and she just has to be very seductive in the way that she tricks her enemy into falling into their own death. And I thought. ‘Well, that’ll be interesting to do. I’ve never done that.'”

Just as Gunn gave Saldana the freedom to play with her character, del Toro also appreciated the way the directed allowed him to take chances with the smaller role of Taneleer Tivan, aka The Collector.

“I felt like I could explore the character in every way I would have wanted to,” del Toro said. “And James was very supportive to taking chances and trying different things. And I felt like an animal that grows up in a cage and suddenly you open the door and he comes out and he’s tentative to take chances. James was very, very nice to me to allow me to like go, go, go, go, go. And so at the end I was like, ‘Oh, I could have done this, I could have done that.’ But it was a great feeling.”

One of the most heartfelt moments in the press conference came when Diesel talked about the timing of the project, coming as it did on the heels of the death of his friend and Fast and Furious co-star Paul Walker in November of 2013. As a gentle, humanoid tree, Groot symbolized growth and regeneration in a way that spoke deeply to the actor at the time.

“It was at a very important time when I did this movie because it was in December and it was the first time I was coming around humans again and the first time I was working again,” Diesel said. “And there was something very therapeutic about in my personal life– I guess in my professional life, too–dealing with death and then playing a character that celebrates life in the way that Groot celebrates life. I took my kids to a screening to see this movie and they walk around the house reciting Star-Lord, Gamora, and all the characters. Something very beautiful happened in playing this role. Something that as an actor I never would have imagined.”

Guardians of the Galaxy opens in theaters on Aug. 1.