Today’s Word Nerd is one of those cases where two very similar phrases exist, and because of being misheard, the wrong one gets used. Yes, it’s a mondegreen. Like “for all intensive purposes” or “all the sudden” (and please don’t ever say either of those), “flush out” crops up where it makes no sense, due to people having misheard “flesh out.”

Flesh out: to gain weight, or to add detail to a basic plan or concept.

Flush out: to frighten birds or game out of the brush, or to rinse with water or other liquid.

Flesh, meaning the skin, muscle and fat of of a human or animal body, originates around 900, from the Middle English flesc. In Old Norse, flesk means bacon.

Flush, which has several meanings, (a blush; a rosy glow of the face; a rush of water; a sudden rush of emotion; to wash out with water; to animate or excite; to be full; to be level with a surface), originates around 1200, with the alternate meanings cropping up over the next 400 years.The primary source is flux, meaning flow, which comes from the Latin fluxus, the past participle of fluere, to flow. Variants include flash and flood. 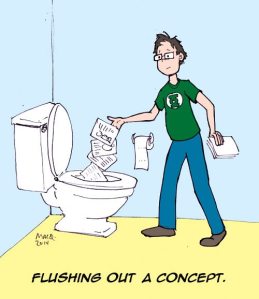 Flush, meaning to fly out suddenly, may not be derived from flux at all; it may instead be a bit of onomatopoeia, imitative of the sound of flapping wings. It may also be a case of devolution, coming from the variant of flush, flash, meaning rapid or sudden, but reverting to the earlier word. Or it may be some of each.

If you talk about fleshing out a fugitive from hiding, you’re planning to make him fat.

If you say a story needs to be flushed out, you’re saying it needs to be frightened into fleeing so you can shoot at it.