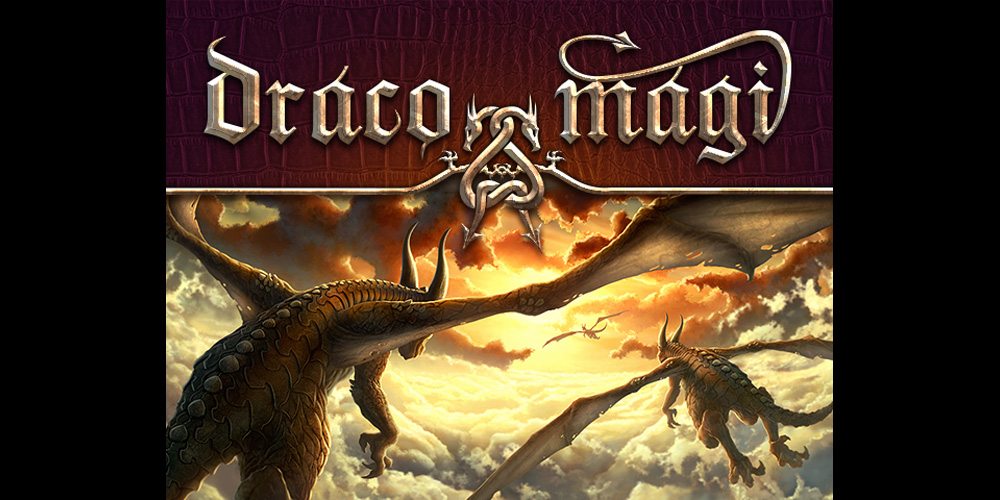 The new year has brought a new batch of board game Kickstarter projects, and there are a lot of them that look really fascinating. I’ve got prototypes and demos of a few of the projects that are currently running (or launching soon), but there are several others that I didn’t find out about early enough to arrange for a full review. I can’t afford to back all of them, but here’s a list of the games I’ve been eyeing. 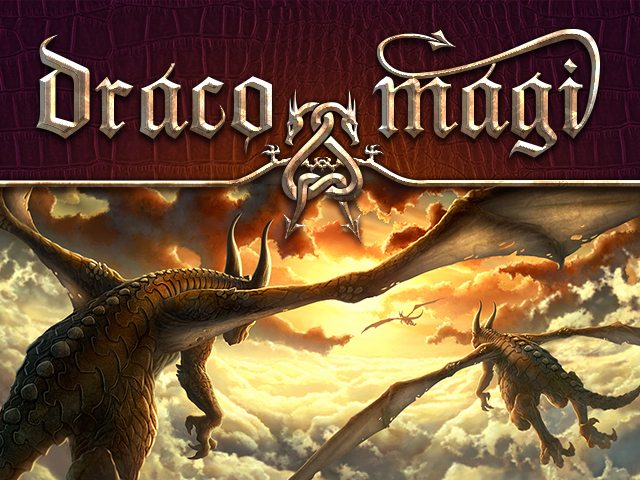 Draco Magi is a two-player card game about battling dragons from Richard Launius and Robert Burke. The game is $15 on Kickstarter (with a planned retail price of $25); the project creators have decided against Kickstarter exclusives but they do have several stretch goals that add new Battlefield and Dragon cards, as well as upgrading the card quality. For more about the game, read my review from earlier this month.

One of my favorite deck-building games (and one of my favorite cooperative games) is Shadowrift, which has you working as a team to defend Haven Town against the hordes of monsters pouring out of the shadowrift. I met designer Jeremy Anderson last year at PAX East and heard a little about his plans for an expansion, which adds big bad guys to the mix: Archfiends. You’re saying, “Wait, I thought Shadowrift already had big bad guys…” Yeah, me too. These are worse. You can also pick up a copy of the original game if you don’t have it yet, with an updated and revised rulebook. Hopefully the rulebook for Archfiends will get a bit of revising before it’s published, too. 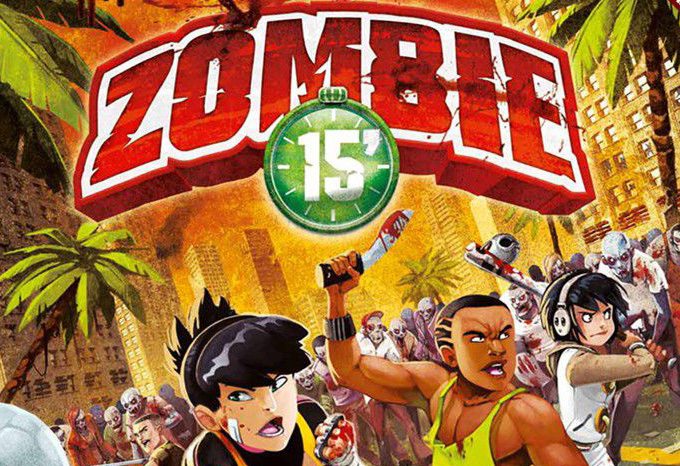 I love real-time games like Escape and Dice Duel, and (despite the fact that they’ve been overdone) I still love zombie games. Iello Games’ Zombie 15′ is a mash-up of those two: a cooperative fight-the-zombies game that plays in 15 minutes. You can play through a string of scenarios, or just gear up for a one-shot game. Sounds like a recipe for awesome. 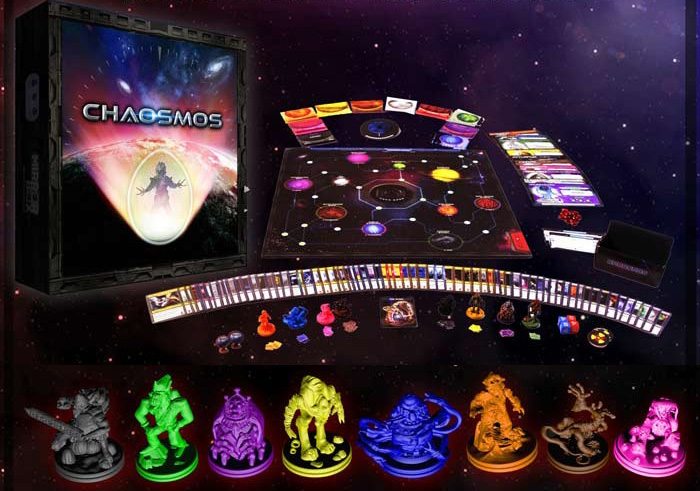 I wish I’d gotten a chance to try out Chaosmos earlier, but the developers didn’t have enough demo copies left. It looks fascinating, but also pretty hefty. You travel around the universe trying to get the Ovoid before time runs out, and the game uses an envelope system where you can stash things in locations (including traps for your opponents). I’ll be watching the progress on this one. 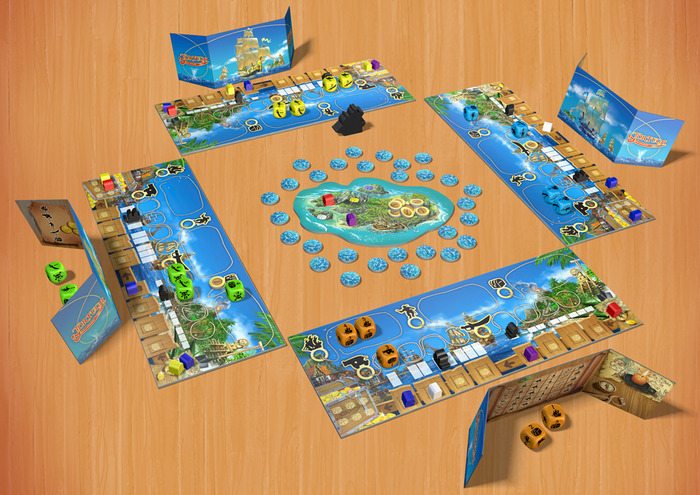 Tortuga reminds me a little of Pirate Dice since it has, well, pirates and dice, but instead of programming your ship’s movement, you’re trying to assign your resources to collecting and transporting treasure. Oh, and since you’re a pirate, you’re also trying to steal from other players while protecting your own hoard. It’s another one that I haven’t gotten to play myself yet.

Pledge for base game: $50 (with some lower early bird prices). Ends February 13.

Villages is a rummy-style card game that lets you attack your opponent’s sets and steal cards from them. Designer Jaron Frost has been selling them on The Game Crafter, but this Kickstarter is for a new edition that’s been fancied up. Looks like a fun casual game, plus there are some add-on decks available for more variety. 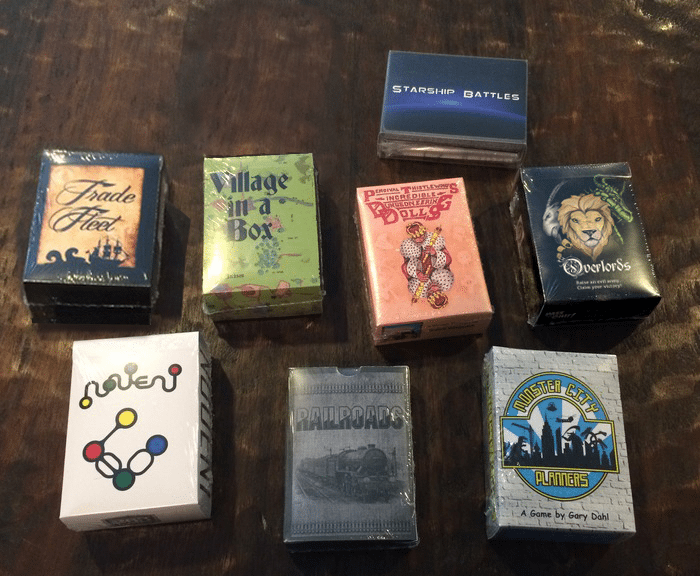 Speaking of The Game Crafter, they’ve got their own Kickstarter running for Village in a Box (not to be confused with the above Villages)—but the campaign is actually for not one but eight pocket-sized games. There’s quite a variety and it’s a little overwhelming, but if you’re a fan of small games you might find something here you’d like. 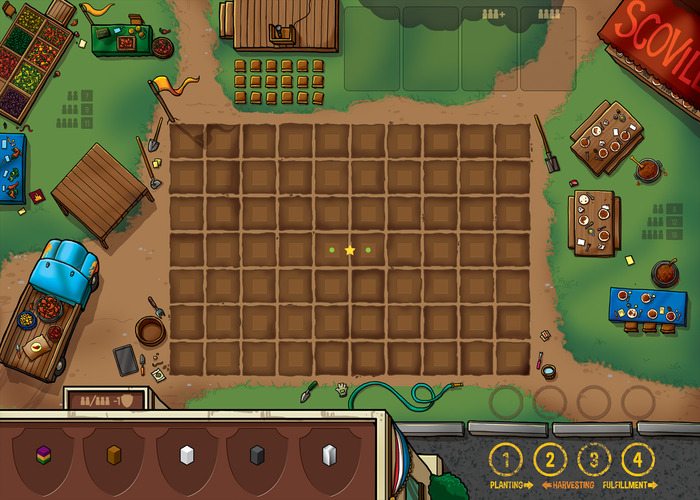 The latest from Tasty Minstrel Games (how many projects have they launched this year already?) is Scoville, a game about farming spicy peppers. It incorporates an interesting mechanic in which all the farmers are moving about in the same field, and you can cross-breed peppers that you’re standing between.

City of Iron is one of those games that I backed on Kickstarter and, shamefully, haven’t actually gotten to play yet. It’s sitting there on my “to be played” shelf along with several other Kickstarter-funded games, hoping to be played once I catch up on all the “need to review” games. Sigh. Well, Ryan Laukat now has a Kickstarter running for the expansion, Experts and Engines. Maybe I’ll get to it eventually! 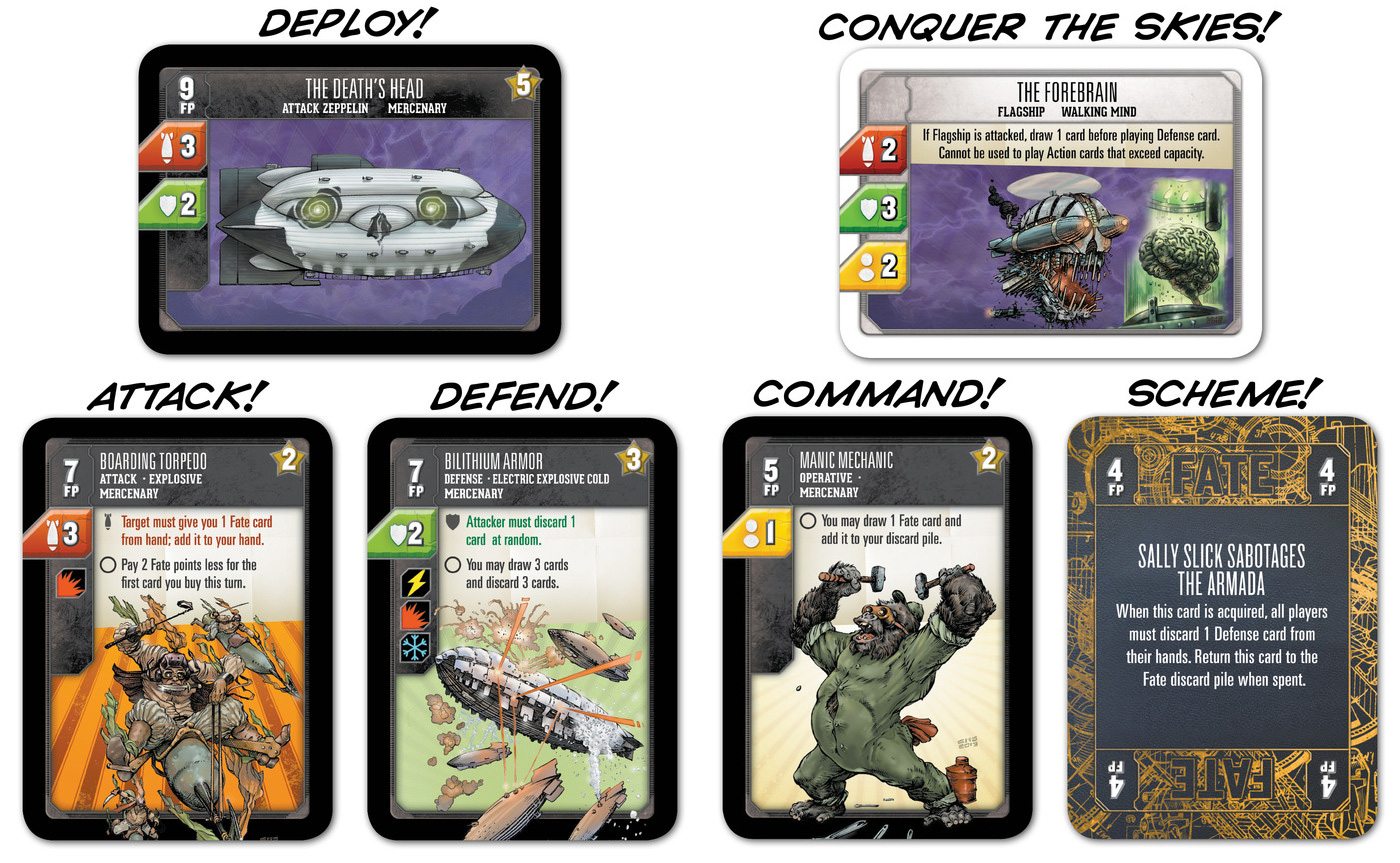 Zeppelin Attack! is a deck-building game that may focus more on attacking other players than the actual building of decks. I just got a demo prototype so I’m hoping I’ll have a more in-depth review soon, but it’s designed by Eric Vogel and published by Evil Hat Productions so it has a fun pedigree.

And a bonus that launches on Friday. Lagoon: Land of Druids is a game in which you shape the world by adding and removing tiles, each of which gives your druids specific abilities while they occupy them. The designer, David Chott, joined my gaming group last year, and I’ve gotten to play this one a few times in prototype form. Watch for the Kickstarter and a full review from me soon! 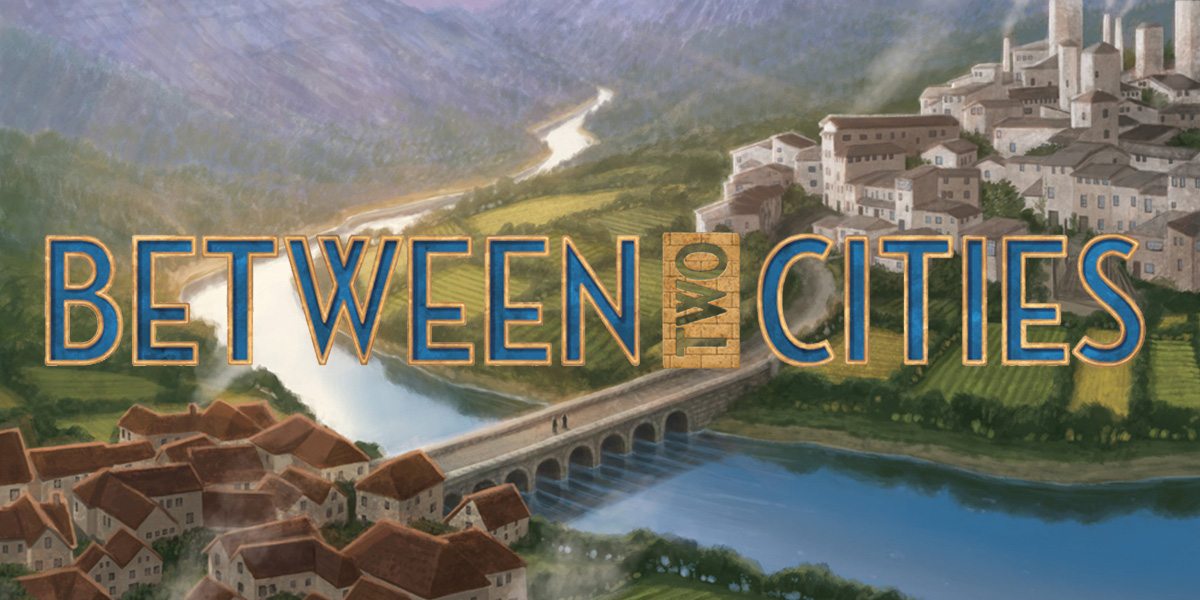 Reaping the Rewards: ‘Between Two Cities’ 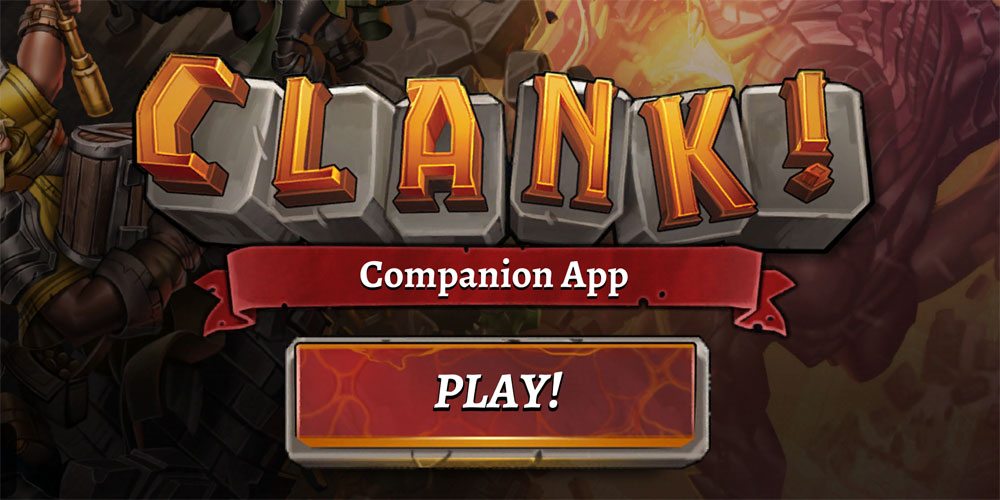 5 thoughts on “11 Tabletop Games to Back on Kickstarter”