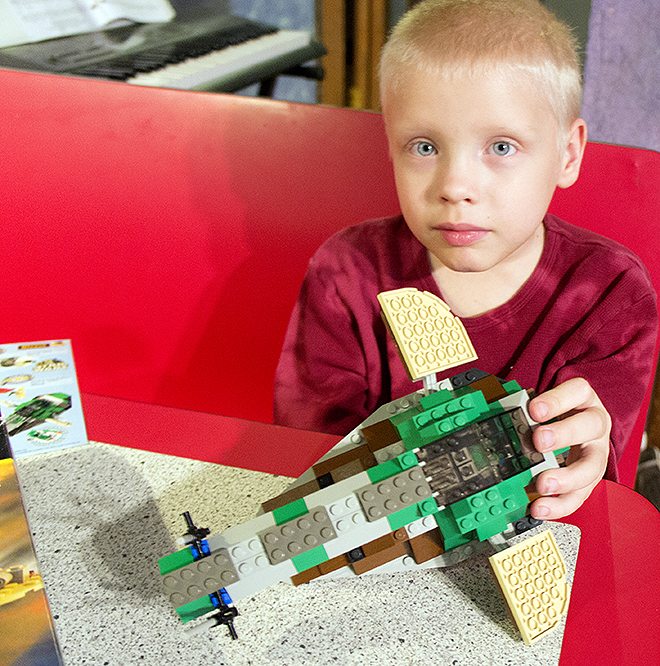 My son and I built our first Lego brick kit together. We’ve got tons of Lego bricks around the house. At one point, I even bought them off of eBay by the pound. My daughter and I assemble them together all the time, but adding my son to the activity was more accommodation than it was true participation. Until last year.

He’s autistic, and sometimes it’s hard for him to sit still, to communicate, and to follow multi step instructions. He loves playing with Legos, but the idea of putting together a kit was too much for him. He’d rather play with the pieces his way. And that’s fine. That’s why we have all those bricks around. Some kids on the spectrum are the opposite. Lego kits must be assembled exactly the way the instructions say. Any other way would be breaking the rules.

We found a surprise when cleaning out my shelves. An old Lego kit. It’s so old that I’m pretty sure bought it before I had kids. I set it aside, and my son picked up the box and excitedly declared, “Lego Star Wars!” I told him we could build it together.

I pulled out the pieces and the instruction book. Normally what would happen at this point is he’d get upset about me interfering with his toy and grab all the pieces, and that would be that. Instead, he sat next to me and built along. I’d point at the step in the instructions and try to find the appropriate pieces. He’d look at the picture and put the pieces in place. Correctly. Sometimes he’d ask for the pieces for the next steps, “Gray! Blue! Green!”

When his toy was assembled, he declared it to be a space ship, and then spent most of the afternoon taking off into space. “Zooom!”  I immediately knew what he was getting for his birthday.

As it turns out, I could have purchased a couple of kits for the price the now collector’s item Slave I ship would have fetched new in the box. I don’t mind. I got to spend some mother-son bonding time and see my boy develop a new skill. Sometimes it’s not the Legos.

A version of this article originally appeared in Wired.

My Journey to the Blue Side of Star Wars