My daughter and I were invited to the New Victory Theater over the weekend, and invitation I’m always quick to jump at because they have a great history of kid-friendly shows.

The current show is The Intergalactic Nemesis, billed as a live-action graphic novel. On stage were three microphones, a grand piano, a laptop, and a giant foley setup. I explained to my daughter how radio plays used to work (though they were a little before my time), and how a foley artist uses all kinds of materials to make sounds. It was all a little strange to her until the performers came on stage. The versatile actors, Christopher Lee Gibson, Danu Uribe, and David Higgins, shifted seamlessly through a wide cast of characters while graphic novel panels by Tim Doyle flashed overhead.

The story follows reporter Molly Sloan and her sidekick, Timmy Mendez, who have a bit of a Lois Lane/Jimmy Olson thing happening. They stumble across the story of a lifetime when they meet time-traveling librarian Ben Wilcott, send back in time to save the earth from an evil, sludgy, alien master race, the Zygonians. Human hypnotist Mysterion the Magnificent is another bad guy that keeps popping up, aiding the Zygonians to be rewarded with control of all of humankind. Gibson is particularly hilarious performing Mysterion, and a French ally to our heroes, Jean-Pierre Desperois.

My only real beef with the show is that I could have used some more female characters, especially since the few we had, even the smart, savvy Molly Sloan, were party to propositioning and seduction (all PG, of course).

The multimedia show gives you so much to watch, it’s sometimes hard to know where to look. The actors have a physical performance as well as a vocal one, so its fun to watch their gestures and facial expressions, even though you’re missing some of the great retro comic book art up on the screen. I particularly liked watching foley artist Cami Alys work, making sound effects with cinder blocks, boxes of mac and cheese, and a remote-control cement truck, among a table full of other stuff.

The Intergalactic Nemesis began as a multi-part radio show in Austin, TX, before it was written into a long-form show. Since its premiere in 2010, the show has been on the road and has even spawned a sequel, Book Two: Robot Planet Rising. This coming weekend is the last weekend The Intergalactic Nemesis will be at The New Victory Theater, so New Yorkers, check it out! Outside of New York, check out the tour schedule on the website and catch upcoming shows in Canada, Florida, California, and Washington, D.C. 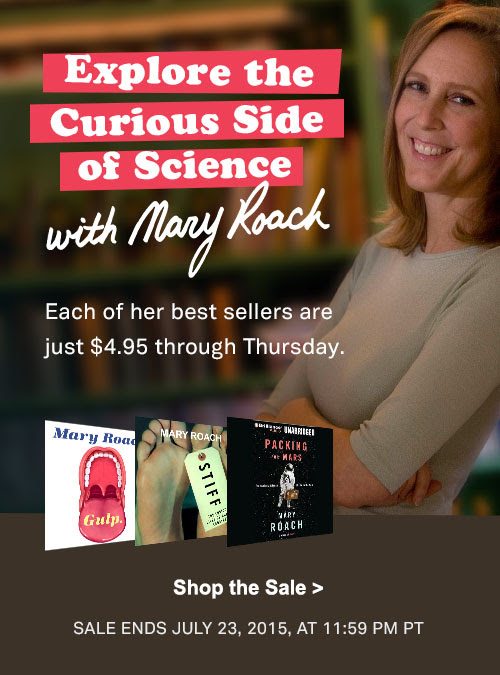 Mary Roach Gems on Audible for Less Than 5 Bucks!

All Aboard the Dinosaur Train!