A few months back, I wrote about a very cool creative writing/creativity tool/parlor game called The Storymatic. It’s great for kickstarting story ideas. You draw cards with character details and plot situations and then run with the prompt to create stories.

That version was aimed broadly, at all ages. Now there’s version just for the young-uns, called The Storymatic Kids!.

According to the website, The Storymatic Kids! is a game that requires “No wires. No screens. No batteries. Just pick a few of the cards and watch a story take shape before your eyes. How you tell it is up to you. Write it, draw it, act it, sing it!” I’m all for non-screen, non-electronic activities for my nephews and I think they’re going to love this. (To my mind, Storymatic could be a gateway drug that leads them to Dungeons & Dragons. Mmmwahahah!) A sample yellow card, which helps create the character for your story. (Image: Brian Mooney)

The Storymatic Kids! looks perfect for budding writers, parents needing ideas for bedtime stories, and teachers who want to get kids thinking creatively. And I’m sure it will fill the long hours during road trips and rainy days, as well as provide positive fun for birthday parties and camping trips. The set includes 360 cards, which the box claims, will yield “six gazillions stories.” Plus or minus a gazillion.

The kids cards tend to be sillier than the adult version. Plus there’s 20 blank cards so you can add your own prompts. The content is appropriate for children ages 5 and up. A sample blue card, which helps create the plot for your story. (Image: Brian Mooney)

Here’s the way Storymatic Kids works: There’s two kinds of cards, yellow and blue. You draw two yellow cards. They might be “mad scientist” and “loud snorer.” Combine, and that’s your character. Then you draw a blue card (or two). “So many giraffes!” or “last of three wishes.” There’s your situation. Now tell the story of what happens.

I had a chance to ask Brian Mooney, the man behind The Storymatic, why he put out the kids’ version.

Ethan “slowpoke” Gilsdorf: So, why did you put out the kids’ version?

Brian “someone with wings” Mooney: Pretty straightforward answer, actually. People asked, and I listened. From the get-go, parents of younger kids, elementary school teachers, and grandparents kept asking me, “Can you make one for younger kids too?” Not that the Classic Storymatic isn’t for younger kids, but I knew what they meant.

Ethan “tattletale” Gilsdorf: What are some awesome ways for kids and parents to use The Storymatic Kids? Brian “someone who farts a lot” Mooney: I did a bunch of new activities in the booklet involving building (the cards are thicker than the Classic, so you can make a “story house”), improv, and drawing. There’s still writing and storytelling, of course, but I wanted to include activities involving kinesthetic learning and different disciplines, which is fancy teacher-talk for “moving around” and “art.” For example, one of the new activities is an improv game called One to Five, in which players draw cards and act out a scene in one minute. Then they do the same scene in 30 seconds. Then 10 seconds. Then five seconds. It’s fun and energetic, and it involves making choices about what to include and what to edit out. Another of the new activities involves making a movie poster based on the cards you draw.

Ethan “sumo wrestler” Gilsdorf: What you think kids bring to the game that adults don’t or can’t?

Brian “person who is turning into an animal” Mooney: A s***-ton of crazy-ass imagination, that’s what. But it’s probably not appropriate to say s*** ton. “Crazy-ass” is probably okay, though, right? Anyway, check this out. I love that. Here’s another link.

Ethan “fraidy cat” Gilsdorf: Are there geeky-specific story cards, say, about superheroes, wizards, or other plots relating to geek culture? Think of drawing cards that resulted in this: “Harry Potter is a pirate and a jump rope champion who sends an email he shouldn’t have. And also there’s a full moon.” The thought made me wonder if people could pull out a subset of cards to generate ideas specific for fans of genre writing or gamer/geek culture. I think Storymatic Kids! might teach storytelling skills that would come in handy for future D&D players, too.

Brian “person who will believe anything” Mooney: Oh yeah. Take a skim through the cards. You’ll find them. I’ve heard that many LARPers use the Classic in that way — apparently the Canadian distributor has done well with stores that cater to that world. 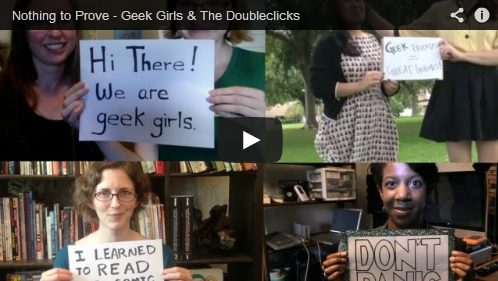