Overview: Yamodo is a series of doodle games — you get a little starting doodle and a made-up word, and are challenged to create a definition and draw a picture. The latest in the series is Yamodo Party Time, which turns the doodle game into a race to win the favor of the Chief Imaginator.

Playing Time: Depends on number of players; roughly an hour.

Who Will Like It? It’s sort of a cross between Balderdash and Pictionary, so it’s a game for people who like to make things up. The cards are long and rectangular, brightly colored, and printed with either a made-up word or a little phrase (such as “your eyes only” or “medieval times”). The pens are your standard garden-variety push-button pens. The Doodling sheets (seen in the photo below) are about the size of a page-a-day calendar, with a line a the top for the word, a few lines at the bottom for the definition, and then a space in the center for drawing. Each sheet starts with some shapes or lines already printed on it — a sort of pre-doodle, if you will.

The components are mostly okay and certainly serve their purpose just fine, except for the box. This is one of the worst box designs I’ve seen. Take a look at the photo. The sand timer and the pens fit in about where the Doodling sheets go — and then the pens can slide in to the empty space below the spinner and you have to pull everything out to retrieve them. Now, see how the cards stick up over the edge of the box? That’s how they’re stored, which means that when you put the lid on, it’s resting on the tops of the cards on one side (hello, bent cards!) and not much of anything on the other side. When I first opened the game there was a sort of cardboard sleeve that sat on top of the spinner and sort of leveled out the top. But a hollow cardboard sleeve isn’t enough to keep the lid from being crushed in a bit, and my box lid is bent and warped as a result.

I appreciate the attempt to make the game playable by just taking the lid off, but really it would have been just as well to have smaller cards that all fit inside the box, and spinner that wasn’t integrated into the box. I think it would have worked just as well, and probably would even have fit into a smaller box. Playing the game is fairly straightforward. Players take turn being the Chief Imaginator, or judge. They turn up one word card and one tag line, and read them aloud. All the other players get a Doodling sheet and a pen. When the judge flips the sand timer, they have 30 seconds to start writing and drawing. Once the time’s up, everyone stops and the judge flicks the spinner, which instructs the players what to do with their sheets. They may get passed left or right or shuffled together and dealt back out. Or if the spinner lands on “In it to win it!” then players get to keep their own sheets. If the spinner lands on “Time’s up” (the narrowest wedge of the spinner) then everyone hands in their sheets to the judge. Otherwise, everyone gets another 30 seconds to complete a sheet — whether they still have their own or have ended up with another player’s sheet.

Once the sand timer runs out the second time, the judge collects all of the doodles and picks a winner using whatever criteria they want. It could be the most convincing definition, the funniest one, the use of theme, or whatever. The winner gets to take the Word card as a point.

Then the next player becomes the judge. The game continues until one player has collected three Word cards.

Poor box design aside, Yamodo Party Time is a pretty fun game. It’s definitely a silly party game — there’s no deep strategy here, other than trying to play to the judge. Plus, with only a minute (or sometimes 30 seconds), you don’t have much time to be fancy. Sometimes you’ll barely have time to scratch out a definition when the timer runs out, and if the spinner lands on “Time’s up” then you won’t have much to turn in.

The fun lies in seeing what everyone comes up with, and since these are all entirely made-up words, there is no right or wrong answer. It’s also fun to see what people have done with their initial doodles, and the involuntary cooperation can make for some amusing results. Some words and tag lines lend themselves to particular interpretations: for “nooblator” and “a walk in the park,” four out of five definitions had to do with killing noobs. (The fifth was something about noodles and I threw it out.) But others (“lufax,” for instance) can result in a wide variety of answers.

Ultimately it’s just a chance to draw silly doodles and make things up. Players who like to play by the book and need right and wrong answers will probably go a little crazy, because the judge gets to just pick a winner for whatever reason they decide. But if you’re in the mood for something that’s just a bit loopy, Yamodo Party Time is worth a spin. Just don’t put anything heavy on top of the box.

Yamodo Party Time (and the other Yamodo variants) can be purchased directly from their website or on Amazon. 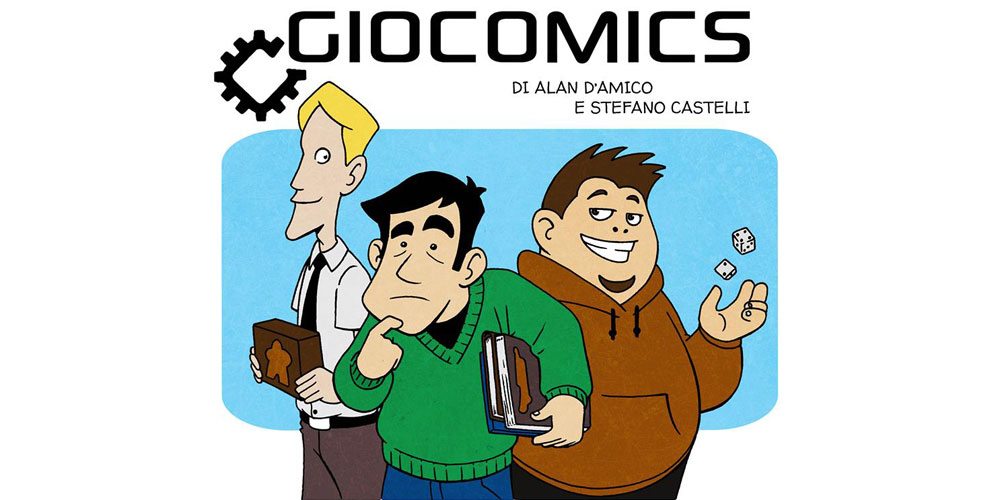 Giocomics: A Webcomic for Gamers