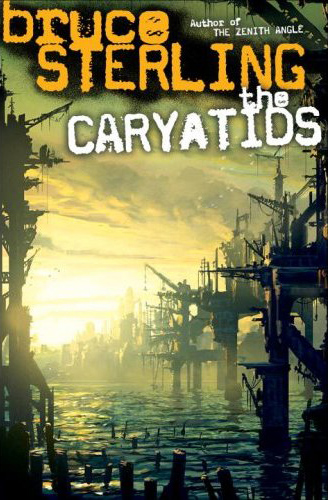 It’s the second half of the 21st century. The nations have mostly fallen and the world has become a cesspit of ecological chaos and crushed cities. The only nation-state left is China, wracked by the cataclysmic upheavals that basically wiped out Asia, surviving only by allowing half its population to die while it nukes Himalayan glaciers and plans to colonize Mars. Other than China, the major players consist of Acquis, a stand-in for Green, center-left Europe, and the Dispensation, sort of a center-right Schwarzeneggerian America — though Europe and America no longer have meaning in a post-national world.

The heart of the story surrounds the title characters, four clone sisters created on an island in the Adriatic from the DNA of an evil dictator.
First we meet Vera, an Acquis environmentalist. Then Radmila, a Hollywood starlet who runs the most powerful Dispensation subgroup, the legendary Family-Firm, inheritor of all the glamor of Hollywood. Bizerka, a madwoman and terrorist, is next. Of the four sisters, she’s the least compelling and gets the fewest pages. Finally Sonja, a surgeon/commando who works for the Chinese government. The women have little in common besides their genius and their hatred for each other.

The caryatids of history were statues of maidens who held up buildings. Taking into consideration a backdrop of rapidly approaching armageddon — burning cities, solar flares, earthquakes, supervolcanoes — not to mention the social chaos implicit in the fall of nations, the symbolism here is pretty cool. Though tremendously flawed and radically different in many ways, the sisters seemingly limitless talents — devoted to the three most powerful organizations on Earth — demonstrate that no matter how bad things get, there will always be people who work, in their own way, toward our salvation.

There were a couple of reviews on the book’s Amazon page complaining about the book’s nonlinear plot. I found it complicated but understandable, but if you like a more traditional setup-climax-denoument structure this might not be the book for you. Sterling, with his usual expertise, weaves countless of plot threads together. John Montgomery Montalban, lover of all four sisters, battles to save the planet one disaster at a time. A secret army tries to assassinate Sonja, but why? What will become of the Caryatids’ mad clone-mother, a brilliant but evil Balkans dictator, hiding aboard the Chinese space station?

The Caryatids is Bruce Sterling’s smartest and most compelling novel to date. Its greatest strength mirrors that of its author: spot-on futurism. If you’re a fan of Sterling’s nonfiction writing, and read his blog, you’ll definitely see a lot of ideas that Sterling’s been playing with lately, as well as a lot of influences from his recent stay in the Balkans. In a book chock full of might-be scenarios and not-yet technology, I found nearly everything utterly plausible.

Kidwords for the iPhone Isn’t Just for Kids