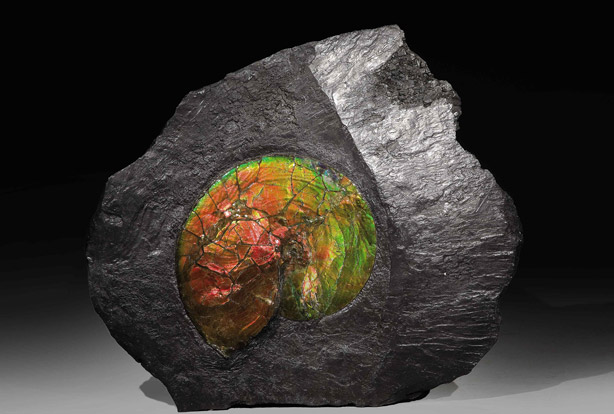 If you’re one of the few people around who still has $68k burning a hole in your pocket, here’s a pretty cool way to spend it.

I had to do a double take when I first saw this photo in the National Post, but this fossilized ammonite from Alberta has not been altered.  The fossil has naturally occurring iridescent colors created when the original shell substance turned into a mineral called aragonite.  The conditions that produce this phenomena have only been found in the Bearpaw formation in Southern Alberta (Canada).  The specimen in the photo is a pretty remarkable one that’s about to go up for auction at Christie’s -the sale takes place on April 7 if you want to mark that in your calendar.  It’s actually the smaller of two ammonites being auctioned (with the larger expected to fetch well over $100k), but you can buy smaller and slightly less colorful specimens online that are cheap in comparison; probably less than a Porsche.  Almost makes me want to dig out my rock hammer and take a bit of a hike.