I know I’m not alone. There are Geeks and Dads who are foodies. I know of at least a couple other GeekDad contributors who like their food and who are trying new things away from their gadgets (mostly) and spend some time in the kitchen. Cooking has become a growing hobby that
(according to my family) I’ve gotten better at over the past couple of years. 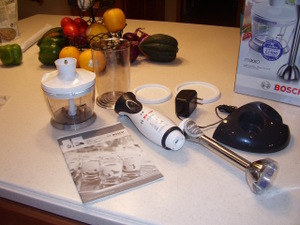 Back in October, I mentioned our low-tech day of enjoying harvest time in Wisconsin. A day of apple picking, pumpkin picking, farmer’s markets, and lots (and lots) of cooking apples. It was also the month I let it slip that I am a huge burger fan.  I guess that combo caught the attention of the food gadget people – because I got to take the Bosch
Mixxo for a spin (literally).

This cordless hand-held mixer sports a lithium-ion battery as well as a safety feature to keep the blades from spinning if little fingers grab it and try to use it.  I charged it up (according to the instruction manual, thank you…) and tried it out.

First food experiment – milkshakes.  And I make mine with just enough milk to allow the blender to work.  It did just fine.

Second food experiment – potato soup.  Using the food processor attachment, it worked its way through raw potatoes and onions for the soup base.

To test out the battery, I purposely let it sit for a couple of weeks (after using it for the soup) without charging…leading to my third food experiment. I needed it to make a puree for a wine/mushroom reduction.  It did the job (although my mistake was not leaving enough liquid from the reduction). It worked and had the power the first and second times I used it. 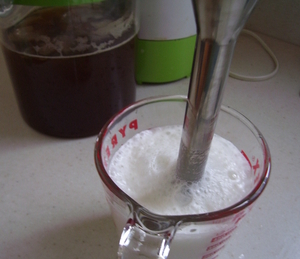 My final experiment was a simple endurance test…this thing hasn’t been charged since the original charge over a month ago…but I ran it non-stop whipping up some milk – after the milkshakes, potato soup and the wine/mushroom reduction –  for 11  minutes and 42 seconds until the battery gave out
(If I had to estimate, I would estimate 18-20 minutes of use on one charge).  My hand grew tired of holding down the power button before the battery was finished.

Where do I see this working – first, in
my wife’s kitchen.  The cordless aspect is what appeals to me the most – I can grab it from the cupboard and move it to the stove or to my kitchen island where I do my dinner prep.  I can see this working as well for the serious tailgaters, for or weekend camping trips and in a pinch when you don’t want to use your blender for something quick since it can fit into a glass or other narrow container.

At the same time, it is one more gadget to have plugged in when the battery has been drained – although my test shows about 20 minutes of use on one charge.  The GeekMom has found a place for it in our kitchen cupboards – she appreciates a clutter-free kitchen – and
I’m happy to oblige…because Happy (Geek) Wife = Happy (Geek) Life.