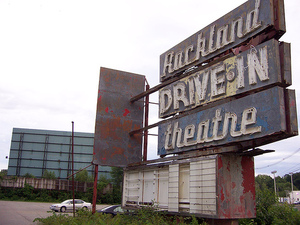 As summer draws to a close (the fun part, anyway), I’d like to offer an ode to that glory of warm weather entertainment, the drive in movie. When I was a child, everyone in the neighborhood would pile into their respective station wagons and head for the Rockland Drive-in. There — already decked out in our PJs, retainers in place — we’d take a few turns on the carousel before climbing aboard the miniature train and screaming our way through the tunnel that went RIGHT UNDER THE SCREEN. Before we knew it, it was time to put down the back seat, blow up the air mattress and stretch out for an evening of magic under the stars.

What did we see? I’m embarrassed to say I don’t remember, except for what then made up the entire pantheon of Disney princess films: Cinderella, Sleeping Beauty, and Snow White. It was a little too late for the sci-fi classics of the 1950s (which I had to catch other times of the year in black and white on Million Dollar Movie on Sunday afternoons) and too soon for the next crop of big-screen blockbusters like Jaws and Superman. (Hey, Ken, did anyone put Superman on your Geeky Kid Movie list?) 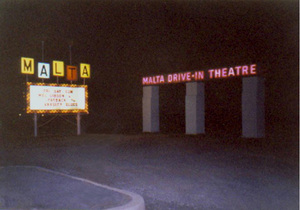 Happily, while today drive-in movies are just a bit of nostalgia for most of the country, in my neck of the woods we have our choice of not one, not two, but FIVE drive-in theaters. They don’t have carousels and trains — and the backseat of the minivan isn’t anywhere near as comfortable as those air mattresses in our old station wagon — but it’s still a treat my family indulges in as often as we can. I’ve even given in to progress and begun listening to the audio on our car stereo instead of the clunky window-hung speaker. This year we caught double features of Wall-E with Get Smart and The Dark Knight with Hancock. And if all goes as planned, before the Labor Day weekend is out we’ll see a TRIPLE feature of Wall-E (sorry, I loved the Hello, Dolly numbers), Indiana Jones and Iron Man.

Have your kids had the experience of watching the dancing popcorn box tap away the minutes until the next feature? Do you love it like we do — or do you have another favorite movie venue?

PS: Drive-ins.com is just one site with links to operating drive-in movie theaters.