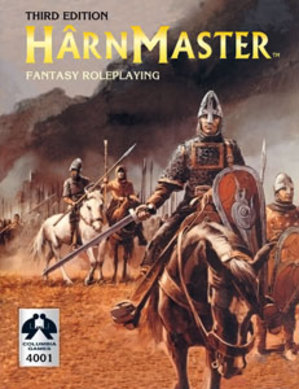 I recently learned of the death of N. Robin Crossby, creator of the Harn roleplaying game. A Gygax-like figure with a love for the intricate details of his gaming world, Kelestia, Crossby built a career as a game designer, continuing to develop Harn for over two decades. He was only 54 when he passed away, a victim of cancer.

When I was a teenager in the ’80s, it seemed to me that kids played D&D and grown-ups played Harn. Of course, this is a gross oversimplification… I’m sure there were plenty of both groups playing both games. Maybe it was Harn’s reputation as being ‘serious roleplaying for serious gamers.’ If you wanted glorious monty-haul dungeon crawls and gnomes bantering with demons, this wasn’t the setting for you. If you wanted low-fantasy, high-realism with intricate languages, coherent history and realistic geography, you wanted Harn.

Crossby described his philosophy this way:

In fantasy roleplaying, most are willing to accept that magic works and that fell beasties roam the wilderness, but not that huge populations of ravenous monsters can support themselves by eating an adventurer every six months or so. The trick is in the degree and internal logic of the outlandishness.

There is a vital element of mood, and this elusive principle lies at the heart of successful fantasy. While it is true that magic-strong, hack and slay environs can keep players and gamemasters occupied for a time, only an environment that is fundamentally rational, has a high level of internal consistency and is carefully maintained can give the feeling that one is involved in an epic. Those who limit themselves to short forays into disjointed chaos are missing something; they are swallowing warm, flat lemonade when there is champagne available.

Harn has its own rules system, HarnMaster, which aficionados prize for its realism. It was the first system to have a hit location table, providing descriptive, location-specific injuries in an era when vague “hit points” were standard. It also was a pioneer in rolling directly against attributes in order to resolve actions not covered by skills. Later editions of HarnMaster improved the speed and playability of the system at the cost of some of that realism.

(Crossby was also a big fan of adding accent characters to Harnic terms, possibly to make them seem more exotic. I have elected to leave those out of this post.)

More so than any game I can recall, Harn is known for the dedication of its fans. The game world, Kelestia, strongly evokes Norman England and is known for a Tekumel-like level of detail that players either absolutely love or hate, with seemingly every building in every town detailed down to a description of its occupants. It’s possible that this detail attracts a corps of dedicated players while dissuading casual ones. One of the aspects of the Harn fandom that demonstrates their dedication is the volume of unofficial, player-generated material that is published on the web. Typically it adheres to the game world’s strict canon. Harn’s publishers, for their part, not only permit this, they wisely encourage it, making for a very rich game world.

While aficionados pride the game on providing a superior playing experience, Harn has pretty much always languished in the shadow of other roleplaying games. It has not helped that the creators of Harn have been squabbling for years. Beginning in 2002 and up until his death, Crossby was in a deadlocked dispute with Columbia Games. What it boiled down to was that Crossby said he possessed sole copyright and said Columbia lacked a license to produce Harn products. Columbia claimed a joint copyright on Harn and continued to publish materials without Crossby’s permission. Neither side cared to litigate, so Crossby sold Harn materials from kelestia.com and Columbia features their own products on columbiagames.com.

If you’re interested in learning more about Harn and Crossby, click on one of the links above. Kelestia.com’s products are exclusively PDFs, while Columbia Games sells one boxed set (the main Harn set) as well as numerous products sold unbound, with the idea that they can be organized into 3-ring binders. Both sites offer a small number of d20 products for those who want take advantage of the rich game world without learning a new system.

The setting may have lost its creator, but with dozens upon dozens of products available from the two sites and countless fan creations available on the web, it’s obvious Harn isn’t fading away anytime soon.